Archaeological sites connected with the production of illicit whisky in Strathconon

The following notes were produced for a NOSAS field trip to Allt Dubh, Scatwell during the Highland Archaeological Festival, October 2016.

All You Need to Know Before Heading t…
It’s Me – Chapter 26
Sindhu Samaveli Full Movie
Would Jesus ever pander to the base?
How to De-Anonymize Scam/Knock-off Si… 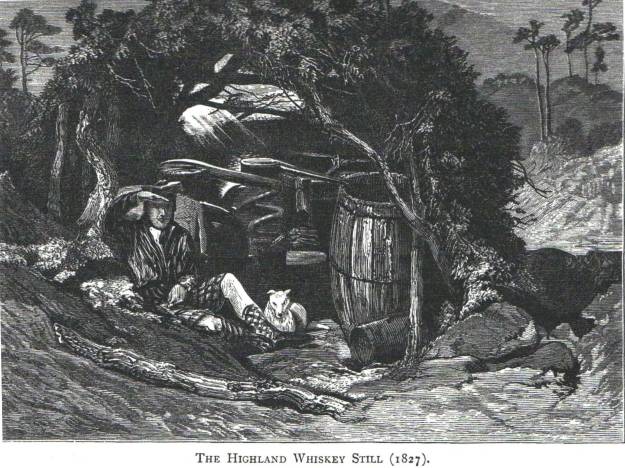 In 2006 NOSAS embarked on a project to explore Strathconon and record its archaeology. One of the many highlights was the discovery of over 50 Illicit still bothies. Quite clearly the glen was a hot-bed for the illegal activity. Many of the stills are in remote mountainous terrain but within the small wooded glen of Allt Dubh in Strathconon there is a discrete landscape which appears to be devoted almost entirely to the production of illicit whisky. In an area of roughly half a square kilometre there are 4 still sites, 10 small farmsteads, 2 kilns and a further site which as yet remains a mystery! In a wider area of 2 square kilometres a further 8 still bothies have been identified. Most of the sites are not impressive in themselves, they were never substantial in the first place and after 200 years they are in a pretty wasted state and, in the summertime, they are covered by bracken or heather.

Historical Background – There was a tradition in the Highlands of household distillation of whisky on a small scale for family and local consumption, but in 1780 the government made small stills illegal in the Highlands and increased the tax on the malt used. The quality of whisky became inferior but yet it was more costly. The production of whisky went underground and illicit distillation flourished from 1780 to 1823. Highland whisky was in great demand and satisfying this demand provided an important source of revenue for a burgeoning population. In 1782 over 1000 illicit stills were seized in the Highland zone – a figure that represented only a fraction of the total number in operation. The area at Scatwell gives us an impression of the illegal activities of a certain section of a population in the glen which at that time was very numerous. 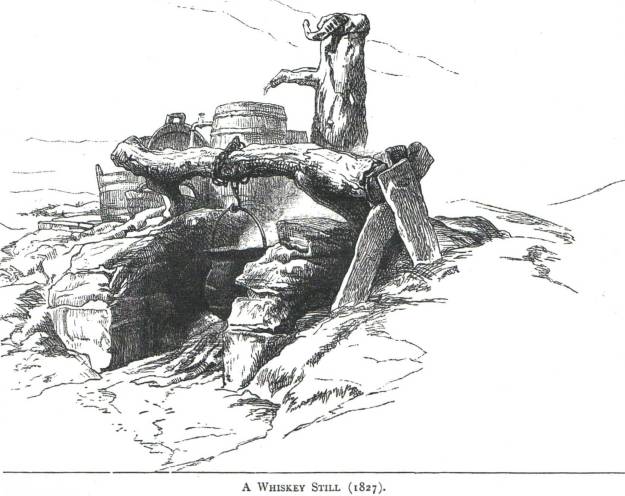 Strathconon was well known for the production of illicit whisky – the glen was a “no-go” area for the excise man. By its very nature illicit distilling is a clandestine affair and no records were kept but we have a contemporary account from 2 landowners who gave evidence to a Government Enquiry in 1822 which verifies the extent of distilling in the glen. Hugh Munro says

In several straths such as Strathconan, Strathcarron and etc, the excise officers are now often deforced and dare not attempt to do their duty as the smugglers are too strong; smuggled whisky is openly carried to market by smugglers escorted by armed men in defiance of the laws….. and last year I was informed by another officer that he was obliged to retire being confronted by a large party of smugglers who were escorting spirits with nearly 20 horses.

The farms are reduced by sub sets to mere patches the occupiers of which live by smuggling……..It was reported that, in Strathconan, 15 bottles a day are distilled by smugglers, amounting to 120 ankers of nine gallons each week. The whisky is openly carried to market by smugglers escorted by armed men in defiance of the laws…… When going about here I often meet smugglers returning with their empty casks.

The distilling process was usually carried out in the Autumn after the harvests. During the rest of the year, the people would have worked a farm on a small scale producing some of their needs by growing crops and keeping a cow or two. A farmstead comprised one or two buildings, an enclosure and an area of improved ground often surrounded by a dyke – 10 such farmsteads are found in this glen, all are very small and give an idea of how marginal the existence was. The people must have been pretty confident of not being discovered. The whole family was often involved, the womenfolk playing a big part in producing the spirit with the children keeping a look-out, while the men were at work in the fields. There are numerous stories recounting the adventures of the illicit distillers and their accomplices in the execution of their trade. Fake “funeral processions” or wakes travelled long distances with the spirit concealed in the coffin, women were seen going to market with sudden advanced pregnancies. 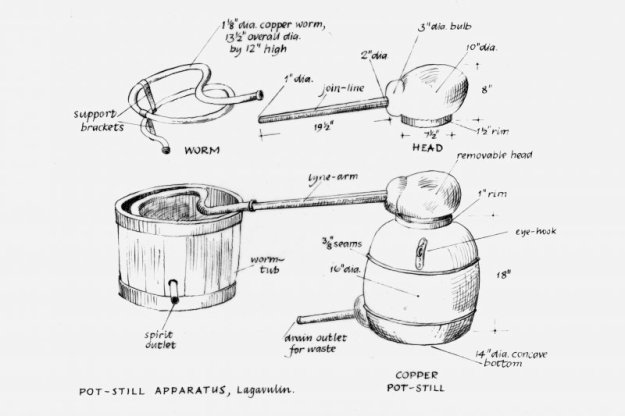 The ingredients for producing whisky were grain, usually barley (or bere, a form of barley), a constant supply of running water and a plentiful supply of peat. The barley is allowed to germinate so that it becomes malt – this process being halted by gently drying the sprouting grain in a kiln. The malt is milled and mixed with hot water to make wort which is then fermented. The resulting wash is then heated up in a still (preferably made of copper) and the alcohol vapours cooled by passing them through a “worm” which has cold water running over it. The spirit is collected from a spout at the bottom

The archaeological remains of illicit stills are difficult to identify. By their very nature the stills are improvised affairs – a sketch by Sir Edwin Landseer is dated 1827. The apparatus of pot-still and worm will have been removed from the sites and the only consistent features of the remaining bothies are that they are in secret, remote locations (often in woods where the smoke would not be easily seen) and they are close to a source of running water. We know that the distillers formed co-operatives, with several banding together in a group, protecting each other and jointly taking responsibility for any fines imposed. 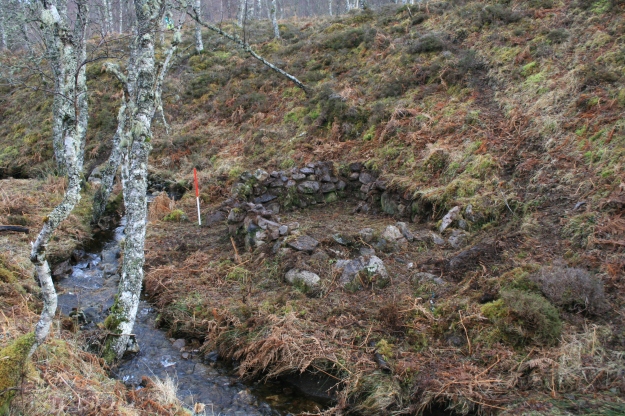 Still bothy by the Allt Dubh, Scatwell. Surveyed by NOSAS in 2007.

The barley would have been brought in by pack pony usually at night. Records tell us that the price of the grain produced in the Black Isle was inflated because much of it was used by the illicit distillers and that grain for consumption had to be imported! Documents inform us that vessels come into the Beauly Firth loaded with barley from the south for the distillers.

Landowners encouraged Illicit distillation by “turning a blind eye” to the practice – it provided cash to pay an inflated rent and in the nearby fertile areas of Easter Ross and the Black Isle it provided a market for barley at an inflated price. Sir George again:

Even the sheriff of the county, Mr MacLeod of Geanies, encourages it; his carts have been seen carrying his grain upwards of 20 miles to be disposed of to the smugglers and when remonstrated with on the subject he answered “How then do you suppose we sell our barley?” This gentleman has for more than 50 years been in receipt of £400 a year from the Government for carrying the laws into effect…….Both the low country and the highland proprietors accordingly attend the excise courts not for the purpose of carrying the laws against illicit distillation into effect but to protect their own interests by an evasion of the laws. Accordingly the excise provincial courts have long become an absolute farce.

The dilemma of the justices at Dingwall was put by Sir George in his evidence:

When we sit in judgement and we see before us our own tenants, we know that when we inflict even the lowest penalty, if the tenant is able to pay then he is not able to pay his rent and if he is not able to pay we must send him to prison where he can do nothing to help his affairs; in the meantime his family is starving on account of being deprived of help or attempting to find relief by conduct far worse than defrauding the revenue. In punishing delinquents under the laws of excise we are directly bringing ruin on our tenantry; if our tenants fall we must fall along with them. 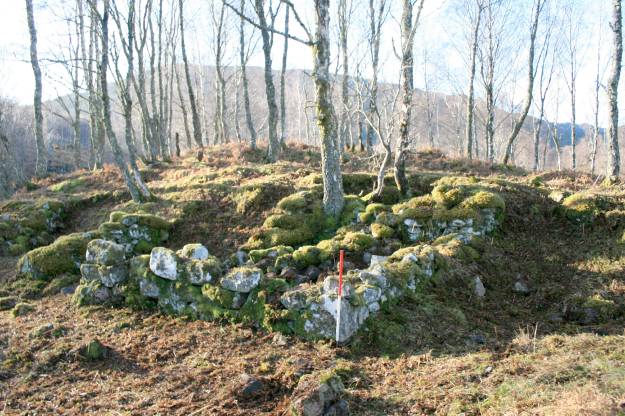 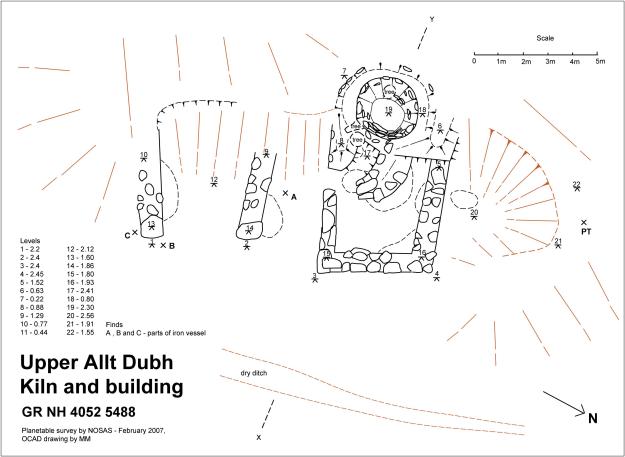 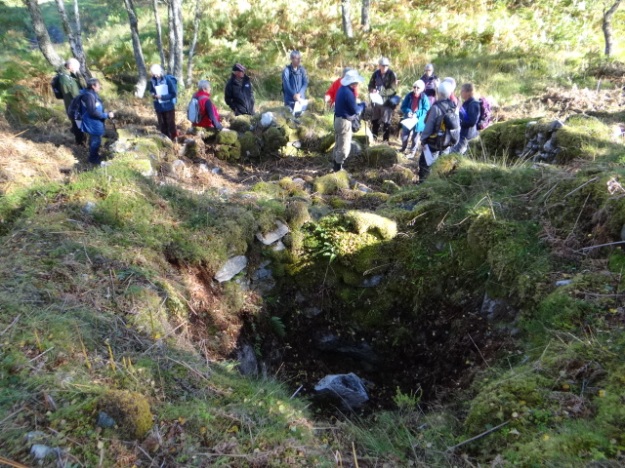 Above: Photographs and plan of the large kiln and buildings at Allt Dubh, Scatwell. It is thought this may have dried grain, supplied from the south via the Beauly Firth, for the many illicit stills in the strath.

The excise men too were not above corruption – it was said that in Ross-shire, the smugglers wives sent presents of veal, poultry, whisky, butter and cheese to the wives of the officers in return for information about a visit from the excise. Given their difficult task the excise men in many cases had abandoned trying to enforce the law and many had resorted to exploiting the situation themselves. Sir George also reports that: “Those (excise men) who were watching have seized the spirits and gone away with their booty instead of destroying it on the spot and seeking the smuggler……

After 40 years the social effects of smuggling had bred a generation of “banditti”. In Hugh Munro’s opinion: “It is not possible to conceive a school of rebellion greater or worse than the smuggling. And Sir George reports: “Children are taught to lie and steal and poach and kill fish from their infancy. They see their parents live in constant breach of the laws and thus pay no regard to the laws themselves. Formerly they were mild sober and inoffensive: now they are daring profligate and full of insubordination; insomuch …..These parts are accordingly nests of vice.

The famous Culrain riots of 1820 in Easter Ross when the local population violently resisted warrants of removal were due, so it was said, to “the habits engendered by illicit distillation” (Devine p173).

By 1823 legislation made the legal whisky more competitive in price and the illicit industry gradually collapsed. Excise men were able to exert their authority – a couple of reports of the resistance encountered appear in the “The Inverness Journal” in 1829 and 1830

“An Excise party proceeded to Strathconon but were met by a mob chiefly of women who poured upon them showers of stones causing them to retreat. They returned with a party of Royals from Fort George, the stills were destroyed and a considerable quantity of spirit seized” and “An Excise Officer assisted by 4 seamen discovered a still at work in Strathconon. They called on reinforcements and again visited the bothy finding 8 sturdy Highlanders round the fire – a scuffle ensued and both parties were severely hurt some to the danger of life. Two of the smugglers have been taken”.

The New Statistical Account for the Parish of Contin in 1837 has:  “For many years smuggling prevailed in the interior of the parish to an alarming extent and must have been hurtful to the morals of the people, but it has been so completely suppressed that illicit whisky has now become almost as rare as foreign spirits”.

Further info on highland whisky distilling and related sites can be found in our earlier blog on Muchaich. 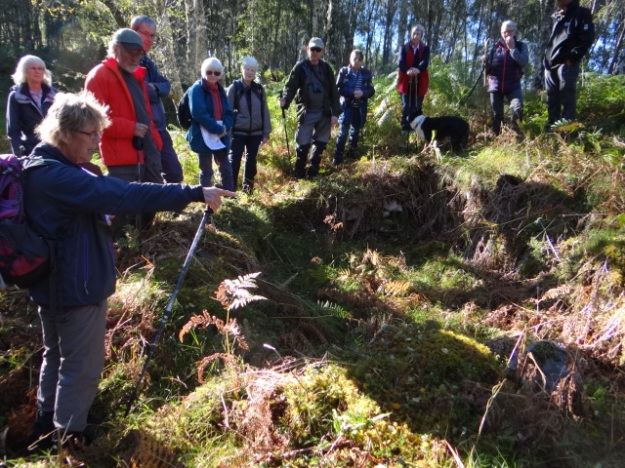 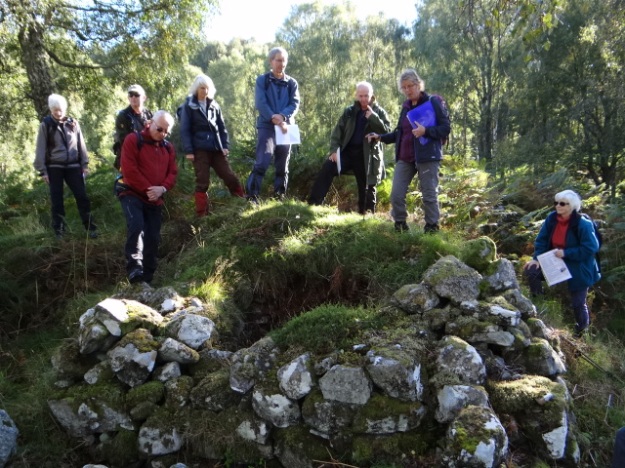 Above: Photographs from the HAF field visit to Allt Dubh, Scatwell in October 2016 led by Meryl.

This post first appeared on NOSAS Archaeology, please read the originial post: here
People also like
All You Need to Know Before Heading to Scotland, Things to Do, Not to Do, and Brilliant Advice
It’s Me – Chapter 26
Sindhu Samaveli Full Movie
Would Jesus ever pander to the base?
How to De-Anonymize Scam/Knock-off Sites Hiding Behind CloudFlare
Parrot pet
Rep. Keith Ellison at #NN17: Kim Jong-un is ‘acting more responsible than’ Donald Trump
How To Win America’s Fight Against The Opioid Epidemi
Bingo Books
Tether’s Response to Baseless Complaint in Washington State