Let Us Pay For Them To Pray 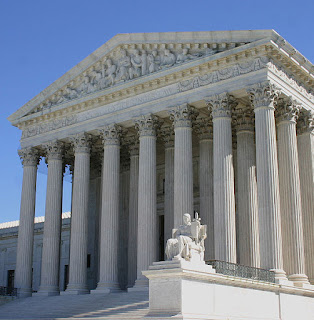 In an opinion mercifully lacking in self-serving references to antiquated opinions of jurists dead for centuries, the Supreme Court of our Great Quasi-Republic has decreed that a law of the State of Maine in force since 1981 is unconstitutional.  The law provided that public funds (taxes) may, in certain circumstances (primarily where public schools are unavailable), be used to pay tuition to private schools of a parent's choice, provided the schools are nonsectarian.  A "sectarian" school is considered to be one associated with a particular religion or belief system, which teaches regular academic subjects but also promotes a particular religion or belief system or teaches subjects taught from the standpoint of that religion or belief system.

In Carson v. Maine, the Supremes have decreed that this cannot be, i.e. that if public funds are to be used in support of private schools, they must be used to support schools which promote a particular religion or belief system.

Getting Ready To Retire? Make Your Dr…
Ecosusi – 15% discount on Messenger B…
64 Awesome Things to Do in Costa Rica…
What would happen to a modern-day Mos…
Cricket Betting Apps for Real Money i…

The majority of the Court notes that this doesn't mean that public funds must be used to promote a particular religion or belief.   At this time (not yet?) the Court makes no such decision.  The majority points out that Maine may avoid this result by providing an adequate number of public schools.  Presumably, it may also do so by ceasing the program by which public funds may be used to pay tuition to private schools where there are no public schools.  If public schools are not available, it seems, it is constitutionally more appropriate that schools promoting a religion be paid public funds if public funds are used to promote education.  Constitutionally speaking, better no education at all than no religious education, saith the Supremes.

The majority makes an interesting distinction between past precedents against using public funds to benefit religions and its decision in this case.  It states that previous decisions prohibiting the use of public funds to support "church leaders" or education of religious clergy do not apply in this case.  In this fashion, a religious belief--a religion--may be supported by public funds, but particular adherents of a religious belief may not.  What, though, is the basis for this distinction?  Why is it significant?

It isn't clear to me that this is addressed by the Supremes.  It is, instead, merely a difference in circumstances relied on to avoid the need to acknowledge prior decisions as binding.  It's precedent-avoidance, of a kind indulged in by lawyers whenever they want to ignore the kind of reasoning employed in the previous case, and its holding.

One wonders if the intent behind the doctrine of separation of church and state was to merely prevent the direct funneling of public funds to "church leaders."  Or if it was the intent that public funds be available to religious believers who are not religious clergy.  In what sense is one or the other more likely to lead to or constitute the establishment of a religion?  In what sense is a person's ability to practice his or her religion impaired if he's unable to use public funds to pay the tuition of his children needed for them to attend a school promoting his or her religion?

I'm a cynical soul, I'll admit.  I think the number of citizens of U.S.A. who actually practice their religion, rather than merely avow it, is relatively small in comparison with its population.  Diogenes the Dog searched for an honest man. I think the search for a true Christian (for example) would be no more successful.  Practicing a religion in these times consists of simply following established rituals and ceremonies.  Perhaps that's always been the case.

But let's say that engaging in those rituals and ceremonies is practicing religion.  I doubt attending a secondary school will constitute such practice.

I, for one, would oppose the use of public funds to pay the tuition of any private school.  So the fate of this particular law is a matter of indifference to me.  The state may have an interest in an educated citizenry, up to a point, meriting expenditure of taxes received, but I don't think it can be maintained it has an interest in the promotion of any particular religious faith.

And that would seem to me to be the real question to be addressed.  Should, or may, public funds be used to pay the tuition of a Christian, or Muslim, or Hindu, or Jewish high school?  Perhaps Scientology has high schools also--I don't know.  I would say no, regardless of the religious faith being promoted.   It appears the majority of the Supreme Court would say yes.

This post first appeared on Ciceronianus; Causidus, please read the originial post: here
People also like
Getting Ready To Retire? Make Your Dream Website With WordPress
Ecosusi – 15% discount on Messenger Bag
64 Awesome Things to Do in Costa Rica, Where to Stay, Know Before You Go
What would happen to a modern-day Moses in America?
Cricket Betting Apps for Real Money in India

Let Us Pay For Them To Pray