A Tough Roe to Hoe 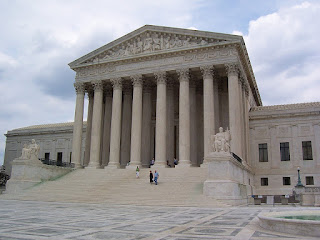 I almost feel obliged to comment on the Remarkable leak of what seems to be a draft of a majority Opinion of the Supremes reversing Roe v. Wade, and the remarkable nature of that opinion.  It's not something I enjoy doing.  Abortion is something to be taken seriously, and given serious consideration.  It isn't clear to me that serious consideration is possible in our times.  In this post, my comment will be limited to what I think is remarkable about the opinion, rather than its impact or its conclusion.

What would happen to a modern-day Mos…
8 Steps You Can Take to Empower Your …
zChocolat – The most heavenly Easter …
Kevin Samuels — Narcissistic Modern W…
5 Best Back Shavers: Buyer’s Guide & …
It's unusual for long-standing precedent to be reversed by a court, but it happens, and is possible in certain limited circumstances.  So I don't think the fact this opinion would if adopted reverse Roe v. Wade is remarkable in itself.
What is remarkable to me is the tone of the opinion and the nature of the argument made, in certain respects.  Its tone is angry and contemptuous.  The decision reversed, and therefore those Justices who made the decision, are ridiculed.  It seems a kind of rant; its author pontificates.  He seems to have a rather enormous axe to grind, and he makes a display of grinding it.  There's a kind of exhibitionism involved in writing of this kind.  It's unusual for a Justice of the highest court to write in this fashion, and it's especially unusual for a majority opinion on a very serious subject to be infused with such self-righteousness.  Sometimes, the author of a dissent will indulge in sarcasm.  But majority opinions make law.  Bismark famously commented that its best not to see how laws and sausages are made.  It seems that may be true of case law as well as law adopted by legislatures.
It's also striking that the author of the opinion goes to such lengths to support the claim that abortion has never been considered a right, and instead has been considered a crime.  The law as it Existed Centuries Ago, and the writings of commentators on that law who also existed centuries ago, are seldom pertinent to any lawyer or court and are generally disregarded in the actual operation of the law.  They're the concerns of historians of the law.  Nobody cites Blackstone or Hale in court proceedings.  One may as well cite Ulpian or the Code of Justinian, if not that of Hammurabi.
It's remarkable that the author of the opinion failed to understand that engaging in such a rhetorical exercise would merely make him appear silly, or pedantic, or a crank, or antiquated, or prejudiced.  It can't be denied that the laws of the past were in many cases cruel and the result of injustice, bigotry and superstition which at least ostensibly have no place in the modern world .  Why bother referring to them in reversing a decision on the grounds that the right it relies on doesn't appear in a document so clearly the work of men of the Enlightenment--men who claimed rights the existence of which was denied, or at least thought subordinate to that of a King?
It's possible that this first draft in the normal course would have been modified to be less of a rant and more like a reasoned decision.  My guess is it certainly will be now that it's been exposed.  If not, then I suspect we'll see concurring opinions that are somewhat less virulent and less dependent on antiquated law and thinkers.


This post first appeared on Ciceronianus; Causidus, please read the originial post: here
People also like
What would happen to a modern-day Moses in America?
8 Steps You Can Take to Empower Your Workforce
zChocolat – The most heavenly Easter Egg
Kevin Samuels — Narcissistic Modern Women Are Driving Men Insane?
5 Best Back Shavers: Buyer’s Guide & Detailed Reviews
Making a Career Out of Artifacts
How technology is giving beauty industry a makeover

A Tough Roe to Hoe