Is Algae the Eco Fuel We’ve Been Waiting For? 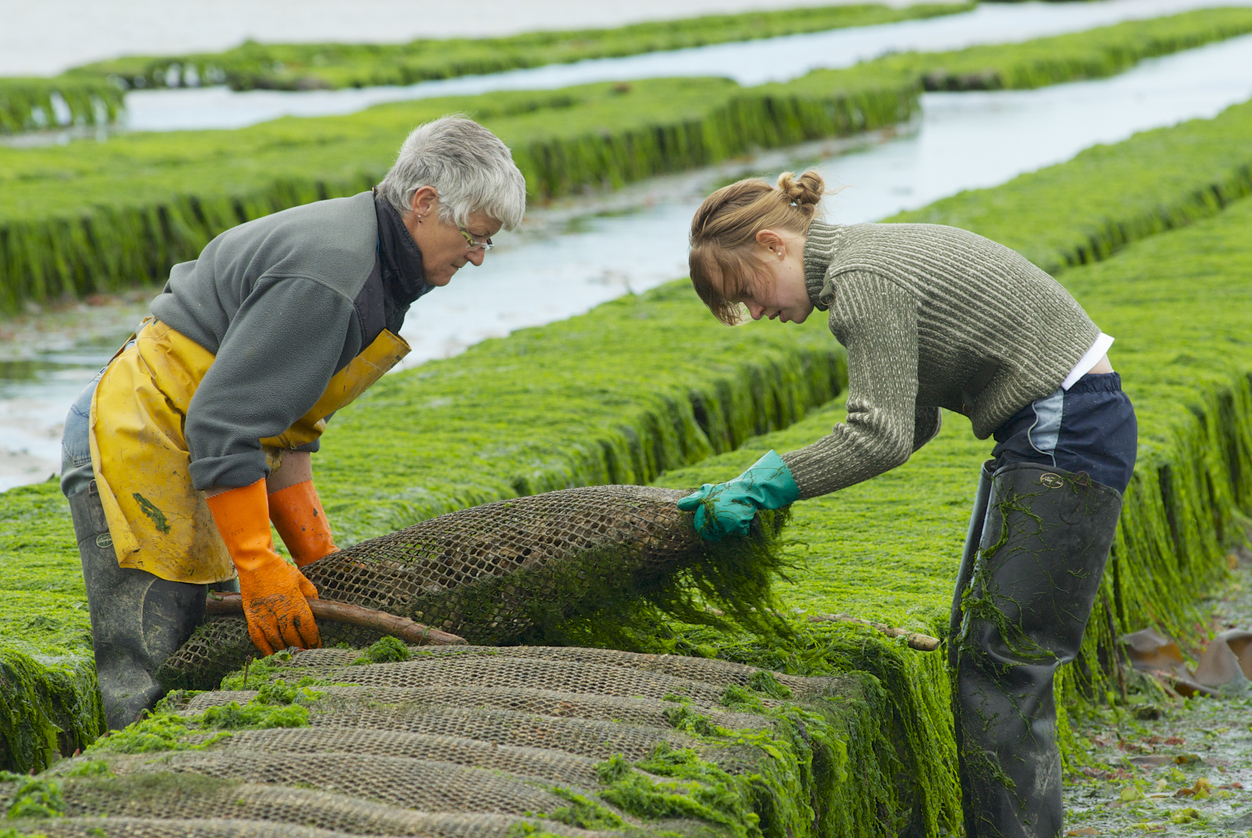 Algae’s worth goes way beyond being a source of food-grade protein – it shows some pretty legit game-changing potential as an eco-friendly source of fuel, plastic, wastewater, and heat.

Microalgae, which are comprised of microscopic, single-celled organisms that turn sunlight into energy (photosynthesis) and carbon dioxide into oxygen, are the fastest-growing plants on earth and absorb pollution. This means that Algae can not only serve a specific function like fuel for cars, replace plastic, etc., but also absorb pollution at the same time.

Algae’s most lucrative use will likely be in the oil industry. To make algae into biofuel, oil is extracted from algae with solvents or sonification (sound waves) and then processed at a bio-refinery. Compared to other land-based plants, algae are able to produce up to 60-times more oil per acre. But with more than 100,000 different strains of algae that grow in all kinds of conditions, researchers are still undecided which strain of photosynthetic organisms will make the most commercial sense. To both scale and cost-efficiently produce algae biofuel, it is crucial for researchers to find a strain that both grows quickly and has a high oil content. Until then, large-scale algae biofuel production is still a ways off.

But, private companies are pushing the leverage against the uncertainty. In June, ExxonMobil and Synthetic Genomics published its most recent breakthrough in the Nature Biotechnology journal: a research team modified an algae strain that enabled it to increase its oil content from 20% to 40% without substantially inhibiting its growth.

In Japan, All Nippon Airways (ANA) and microalgae producer Euglena joined forces to develop the microalgae euglena as a source of fuel for the aviation industry. The oil extracted from euglena can be refined into kerosene and ANA plans to collect 33,000 gallons of the biofuel each year from the euglena bio-refinery, which will be fully operational by the first half of 2019.

These developments further feed the realization that algae have more than just potential – they have a future. Experts predict the algae biofuel market will be worth $10.73 billion by 2025.

Equally as game-changing is algae’s prospects in producing plastics. With some 7 million tons of plastic ending up in the sea each year, the world clearly has a plastic waste problem. Algae bioplastics could be the future solution.

In 2010, Rémy Lucas founded the French startup Algopack. Using a natural polymer in brown seaweed to generate biodegradable granules, Algopack is able to manufacture plastic that takes only 12 weeks to biodegrade in soil and five hours in water.

Another company, BLOOM, is using deadly algae blooms to create plastic. The company vacuums up freshwater blooms in problem areas, where overgrown algae leaches oxygen from aquatic life. It separates the algae and returns the clean water to the waterway. The algae is then dried, pelletized and turned into a flexible foam.

Meanwhile, researchers at the US Department of Energy’s National Renewable Energy Laboratory are using genetically modified blue-green algae to create ethylene, a building block for plastic. Ethylene production typically comes with tons of environmental drawbacks, since it is made from petroleum and natural gas and emits more carbon dioxide than any other chemical process. By changing blue-green algae’s metabolism, researchers enabled the organism to convert some of its carbon dioxide into ethylene, a gas that can then be collected and used to make plastic. Unlike traditional ethylene production, this altered blue-green algae absorb carbon dioxide, instead of emitting it.

Their lofty and promising ambitions aside, all of these ventures are relatively seminal and boutique in nature. Algae bioplastics will take at least another decade to produce on a commercial scale.

Algae for Wastewater and Heat

What may come even sooner than mass use of algae biofuel and bioplastic is algae as a practical wastewater treatment and heating solution.

Global wastewater is the fifth-largest source of methane, comprising 7% of the total global methane emissions in 2010. Global wastewater treatment is also the sixth-largest source of nitrous oxide emissions. The use of algae for wastewater treatment addresses both the chemical process of nutrient removal and its accompanying carbon footprint. Algae remove nutrients, particularly nitrogen and phosphorus, heavy metals, pesticides, organic and inorganic toxins and pathogens from water. Meanwhile, it introduces other benefits – the biomass byproduct can be recycled back into agriculture as a fertilizer or utilized as a biofuel.

This resourceful model is also apparent in the system created to heat buildings with algae. In 2013, Hamburg’s BIQ (bio-intelligent quotient) house became the first algae-powered house in the world. The house’s bio-adaptive algae façade reacts to the environment, growing faster in brighter sunlight to offer more internal shading; that is, it relies on photosynthesis to maintain an appropriate interior temperature. Meanwhile, the growing microalgae produce biomass that can be harvested and are able to capture solar thermal heat, which is used to power the building. Multiple building functions are brought together, in one circuit: solar energy, geothermal energy, a condensing boiler, district heating and the production of biomass in the bioreactor façade.

French researchers have taken similar steps in promoting algae as a power source for buildings. Researchers at the Ennesys Lab in Nanterre, France say that growing algae in a building’s wastewater can lead to the production of oil and vegetable biomass that can be used as a fuel to form heat or electricity. The fuel has the same energy value as coal and can suffice 80% of a building’s energy needs, leaving no carbon footprint in its wake.

Algae for the Future

Despite all their inherent glory and multitude of applications, algae remain in the specialty market for a few reasons; namely, they are expensive and difficult to produce on a large scale.

Typically, algae are grown in the “raceway pond” structure, where water and algae are stored in an open pond and kept in constant motion using a paddle wheel. But as algae start to grow, they self-shade, or block the light of each other due to high density. This method does not allow for high concentrations of algae and must be amended for commercial practicability.

In anticipation of large-scale algae production, producers are turning to the “flat panel” system, a closed system that mixes gas into algae and water in order to continuously push algae toward and away from light. This system encourages faster growth and higher densities. In the Netherlands, researchers switched from the raceway pond to the flat panel method and were able to decrease costs from $3.70 per pound of dried algae to $1.40 per pound.

Another growth solution is darkness. This method steers production away from relying on light and can result in higher densities. Unfortunately, only a few algae are capable of growing in darkness.

It is the biofuel industry that will lead the charge and what will likely command the pace of technological innovations in mass algae production. A growing demand for low-cost and reliable energy sources in a post-oil world puts algae on a promising track. However, high capital investment and technological advancements needed to make algae biofuel and other bioproducts fit for commercial production limit advancement. It remains to be seen how researchers, producers, investors and consumers collaborate to take algae to the mass market.

Related on EcoSalon
These Vivabarefoot Shoes are Made from Algae
Get Benefits of Seaweed in Skincare
What is Synthetic Biology Genetic Engineering? Either Way it’s in Your “Green Cleaning” Products

The post Is Algae the Eco Fuel We’ve Been Waiting For? appeared first on EcoSalon.

This post first appeared on EcoSalon -, please read the originial post: here
People also like
15 Best Things to Do in Colombia for an Unforgettable Trip
Beard Grow XL Review – Everything You Need to Know
The ‘Blob’ Anomaly and How We are Responsible for It
5 Steps to the Perfect Inground Pool
10 Things We Didn`t Know About Yoga Until This Must-Read Dropped
Interview with Blues Rock Artist Albert Castiglia
Can Thrive Algae Oil Replace Your Olive Oil?
Aquaponics 4 Idiots – The Idiot Proof Way of Building an Aquaponic System
NORTH CAROLINA - Hog Farm Hazard
5 Tips to Keep Your Koi Well Nourished
I Started Drinking Liquid Chlorophyll, Why You Should Too!
Ready to try sunscreen pills?

Is Algae the Eco Fuel We’ve Been Waiting For?