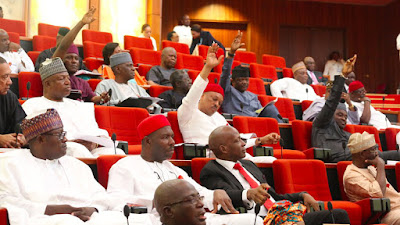 The Senate has refused to consider all 46 non-career ambassadorial nominees forwarded to it by President Muhammadu Buhari for approval.

It, however, confirmed all the 47 career ambassadorial nominees.

There have complaints by prominent members of the All Progressives Congress (APC) including state governors and other relevant stakeholders against the manner in which the President has been making political appointments allegedly without inputs from other stakeholders in the ruling party.

Just last Monday, a meeting was held between the National Assembly leadership, representative of the Governors Forum and Vice President Yemi Osinbajo at Aso Rock with the aim of resolving the brewing political crisis over the alleged lopsided political appointments.

But at Tuesday’s plenary, Chairman Senate Committee on Foreign Affairs, Senator Monsurat Sunmonu, whose committee was to screen the 46 non-career ambassadorial nominees, informed her colleagues that the Committee had received over 250 petitions against the nominees.

Speaking while presenting the Committee’s report on the screening of the career envoy nominees, she submitted that the committee was at the crossroads in the effort to treat the list of non-career ambassadorial nominees.

She, therefore, asked that the nominations be referred back to the president to allow him to address the shortcomings observed by the petitioners.

Sunmonu said:”We thought that the issue raised on the career nominees would be addressed in the list of the non-career ambassadorial nominees but unfortunately the 46 nominees have more troubles than the others.

When Senate President Senator Bukola Saraki put the question to a voice vote, it was unanimously adopted.

It would be recalled that two out of the prominent politicians on the list: former National Secretary of the defunct Action Congress of Nigeria (ACN) Usman Bugaje and former Deputy Governor of Plateau State, Mrs Paullen Tallen, had earlier rejected their nominations

Speaking after plenary on Tuesday, Senate Spokesperson, Senator Aliyu Sabi Abdullahi disclosed that unless the issues arising from the 250 petitions are resolved, the Senate would not do anything about the non-career nominees.

In confirming the 47 career nominees, the Senate ignored observations by senators that 14 of the nominees had less than 30 months left to stay in service while three others couldn’t recite National Anthem during the screening.

In his remarks after the confirmation, Saraki urged the entire 47 ambassadors–designate to be good representatives of the country where ever they are posted.

SDPI, a Political Greenhorn, Fights To Make A Debut In Karnataka Assembly