THE MOVIE ABOUT JACINDA ARDERN THEY WON'T MAKE 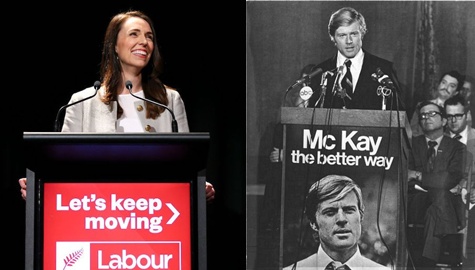 There is a Movie to be made about Jacinda Ardern, but not the one that director Andrew Niccol is planning.

GIVEN THE generally negative local response to the announcement by New Zealand director Andrew Niccol that he plans to make a movie about the 2019 Christchurch terrorist attack, there is now a strong possibility that the project will never get off the ground.  While Niccol may already have a script and contracted high profile actor Rose Byrne to play Jacinda Ardern, he may well experience difficulties attracting the necessary funding required for a Hollywood production like this. The adverse publicity that the tentatively-titled One of Us  has already received, especially from the local Muslim community, may have some potential investors reflecting that this movie isn't for them.

Some of the criticism has been about timing. Is it really appropriate for Hollywood to dive into New Zealand to make a movie about an horrific event that occurred just two years ago? It could well be argued that no time is an appropriate time for a movie like this but, in my view, the most problematic aspect to One of Us is that the primary focus will be on Jacinda Ardern. In effect the massacre which killed 51 people and injured many more will act merely as a backdrop while Ardern is portrayed as striding the local and international stages, intoning her wisdom to the masses.

This has led to some silly claims being made about this movie including that it promotes the ethos of white supremacy. Green MP Golriz Ghahraman, many won't be surprised to learn, has been one of those making such an outrageous claim. I've got news for her: this is just the way Hollywood operates. Hollywood likes a strong central character and it likes clean, mostly upbeat, conclusions to its movies. I can well imagine Andrew Niccol wants to make a movie that exhibits the triumph of the human spirit over adversity and Byrne/ Ardern will be our messenger of hope. An uplifting movie for these fraught and fractious pandemic times would probably do reasonably well at the box office. Hollywood, I'm afraid, is that obvious.

There is a movie to be made about Jacinda Ardern but this is a movie destined not to be made, certainly not by Hollywood. In this movie Jacinda Ardern would be portrayed as a politician who claimed she wanted to be change the world - or at least New Zealand - but ended up being just another defender of the status quo.  It would be an instructive and enlightening movie about the failure of our so-called 'representative democracy'.

Actually, the movie has been made before. The Candidate, released in 1972 and starring Robert Redford, tells the story of the young and likeable Bill McKay (played by Redford) who agrees to run for the US Senate but only on the condition that he can remain loyal to his liberal principals and beliefs. But as the campaign progresses and the election draws ever closer, McKay allows his  beliefs to be slowly compromised away. At the time Redford said that 'We want to do a movie about a liberal politician who sells out.'

Although The Candidate is nearly fifty years old, its themes still resonate today. Bill McKay is eerily Jacinda Ardern-like. His concern for working class and poor Americans is transformed into a generic and marketable cliche about 'caring' while all his talk about a brand new way of doing politics becomes bastardised as  'McKay: The Better Way'.  His message is as trite and meaningless as Ardern's  'Let's Do This' and 'Let's Keep Moving'.

All the while McKay's advisors are telling him he must continue to 'compromise' if he is going to win the crucial battle for the middle ground. Like Jacinda Ardern today, McKay becomes the sum total of his marketed emotional and symbolic appeals. He wins the election but at the expense of the very beliefs that drove him into politics in the first place. The problem with Jacinda Ardern though, an uninspiring centrist, is that there's precious little evidence that she ever actually possessed the liberal idealism of a Bill McKay.

A Furry’s Guide to Cryptocurrency
Paul Oz Takes Oil Painting Into the 2…
“The Friend Who May Not Seem a Friend…
6 Interesting Places To Hold Your Nex…
What Causes Bed Bugs?


This post first appeared on AGAINST THE CURRENT, please read the originial post: here
People also like
A Furry’s Guide to Cryptocurrency
Paul Oz Takes Oil Painting Into the 21st Century
“The Friend Who May Not Seem a Friend” – The Cat and the Fire, Post 2 of 3
6 Interesting Places To Hold Your Next Corporate Function
What Causes Bed Bugs?
Self Motivation: How to Keep Moving Forward In Your Career or Business
10 Notable Online Video Makers That is Sure to Give Your Business an Edge
Capture Attention and Drive Traffic with Catchy Headlines: 7 Ideas for Blog Titles
Things You Should Stop Worrying About in Bed
Raam Tamil Movie | Aarariraro Video Song | Jiiva | Saranya | Yuvan Shankar Raja | Star Music India

THE MOVIE ABOUT JACINDA ARDERN THEY WON'T MAKE