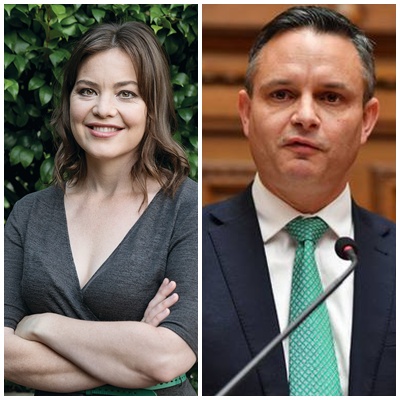 James Shaw wants the public to know that the Green Party is not the kind of party that isn't prepared to trade away its policies in the interest of 'good government'.

NOT BY EVEN the most optimistic of definitions could Julie Ann Genter be described as a left wing politician. Indeed, in a Twitter skirmish with me a couple of years or so go, she suggested that a Green New Deal was much too radical a proposal for the Green's to adopt and it would alienate potential support. Firmly ensconced within the Labour-led government as a minister, Genter has tread a dull centrist path barely distinguishable, at times, from her Labour Party ministerial colleagues.

Regardless of Genter's motivation, it was still too much for James Shaw. The day after Genter told a small business panel discussion that the wealth Tax Policy was a 'bottom line' requirement that needed to be met by Labour for her party to join a second coalition, her co-leader was telling John Campbell on Breakfast that it wasn't. Instead, he said, the tax policy was a 'priority' for the Green's. Doing his best impersonation of a stuffed shirt, Shaw said:

' We don’t use bottom lines because what we want to see is a Labour-led Government with Jacinda Ardern as the Prime Minister and the Green Party back in Parliament and part of that Government.'

Leaving Genter hanging out to dry, he even suggested that she had been 'tired' and that 'she had been pressed on the point'. Oh, she didn't know what she was saying is that it, James? Really?

Given Shaw's failure to stand up to the Labour led-Government over the past three year, we just know that there won't be any 'priorities' that Shaw won't be prepared to compromise or surrender. Since Labour have already said that a wealth tax is out of the question, I imagine it'll be one of the first priorities to disappear from the Green's agenda.

That's the thing. The Green's can campaign on whatever policies they like but if they aren't prepared to stand firm and fight for those policies then they are simply blowing smoke. Again. And why would anyone bother to vote for a party like that?