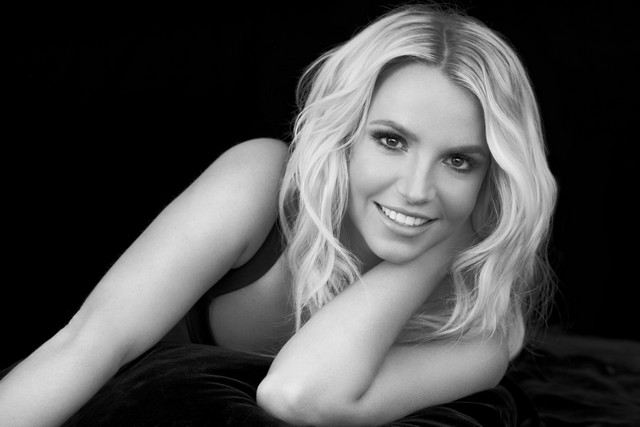 An Instagram post from Britney Spears goes viral after she calls for the redistribution of wealth and strike action. 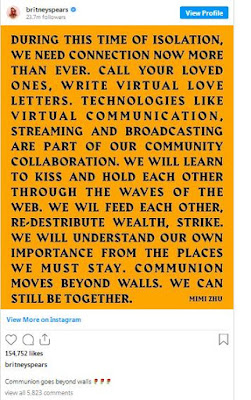 THE CORONAVIRUS pandemic and the accompanying deep recession - heading - toward - depression, is throwing up unexpected political configurations. As capitalism crumbles before our eyes, pop icon Britney Spears has decided that she's had enough. She's called for a general strike and the redistribution of wealth. This is a particularly surprising comment from the pop icon since  she has previously  refrained from publicly backing such figures as Bernie Sanders and Alexandria Ocasio-Cortez - unlike her fellow popsters Ariande Grande and Taylor Swift.
On Instagram she reposted a graphic from writer Mimi Zhu which includes the statement : 'We will feed each other, redistribute wealth, strike.'
While it might be going too far to suggest that Britney's been influenced by Rosa Luxemburg's famous work The Mass Strike, she obviously wanted to make her intentions clear. Her comment 'Communion goes beyond walls' is accompanied by three red roses. The red rose, of course, is the traditional symbol of the socialist movement.

While Britney Spears may not be regarded as a serious political actor by some, she has over 25 million followers on Instagram alone. And they take on board what she has to say. Her post has attracted some 155,000 likes. And some of her fans are now calling her the 'Queen of the Proletariat'.

Actor Fran Drescher has also joined the call for a Mass Strike. Responding to a tweet for a mass strike across the United States and throughout different industries, The Nanny actor tweeted : 'I agree. Capitalism has become another word for Ruling Class Elite. When profit is at the expense of all things of true value, you know you gotta problem'.

Twitter user Bill Corbett commented ' Britney Spears and Fran Drescher went full Trotsky today. Now we're getting somewhere' and Newmo99 tweeted,'I didn't really expect the revolution to be led by  Fran Drescher and Britney Spears, yet here we are and I'm absolutely fine with it.'