CAPITALISM : THE GOD THAT FAILED

In an opinion piece for the New York Times, American journalist Michelle Goldberg writes that for many of America's young, "capitalism looks like the god that failed". While a genuinely left wing movement is emerging in the United States, we have seen little evidence of that happening in New Zealand. Much of that has to do with the continued subservience of much of the left to the electoral interests of the Labour Party.

How Universal Basic Income Gets Attra…
Manton Rempville -6
GIFs on Instagram: Drive Consumer Eng…
Older adults (60plus) lockdown home w…
Koan #6
LAST MONTH American journalist Michelle Goldberg moderated a debate about whether America should scrap capitalism. Organised by the left wing Jacobin magazine, the 450 tickets to the debate were sold out in a day. Jacobin made the decision to move the debate to a larger venue and the extra tickets sold out in eight hours.
In an opinion piece published in the New York Times this week,Michelle Goldberg writes: "When I arrived, people were lined up for blocks; walking to the door, I felt like I was on the guest list at an underground nightclub. Most attendees appeared to be in their 20s and 30s, part of a generation that is uniquely suspicious of capitalism, a system most of their elders take for granted."
in a country where the top one percent now own more of the country's wealth than an incredible ninety percent of the population, Goldberg observes: "it’s not surprising that for many young people, capitalism looks like the god that failed."
The Republican Party's tax plan, effectively a ransacking of the country on behalf of the one percent at the expense of everybody else, can only drive more Americans to the conclusion that the promises of capitalism are false and empty promises. Says Goldberg:
"The Trump era is radicalising because it makes the rotten morality behind our inequalities so manifest. It’s not just the occult magic of the market that’s enriching Ivanka Trump’s children while health insurance premiums soar and public school budgets wither. It’s the raw exercise of power by a tiny unaccountable minority that believes in its own superiority. You don’t have to want to abolish capitalism to understand why the prospect is tempting to a generation that’s being robbed.'
There is good reason to believe that millennials in New Zealand are not enamoured with capitalism either. Every election the political establishment and its media cheerleaders complain about the large number of people who no longer vote - with young people identified as some of the main 'offenders'.
A typical millennial is 26 year old Lauren Parks. Earlier this year she told the NZ Herald: "I'm just not really interested in it, to be honest. I think if I voted for someone I don't think that the opinions that I have would matter to what they have. I've never found someone who would be able to do the things for New Zealand that I'd want to be done, so I've just never really voted for anyone."
And another comment from a another millennial Daniel Talis reflects the same disenchantment with the present political system: "'Low voter turnout' is inevitable when people realise that it doesn't matter who you vote for, the end result will be the same. These days there is little difference between National and Labour, both parties are full of politicians who live in their own bubble and have no idea what New Zealand as a whole needs. If people enter the current system of politics, they deserve all of the criticism and apathy that comes their way. If politicians can't be instrumental in producing positive change for the masses then they shouldn't be there."
In June this year Massey University published the results of a comprehensive election survey, completed by some 40,000 people. It revealed that two-thirds of respondents thought that our representative democracy" is either "completely broken" or "working but needs to change". 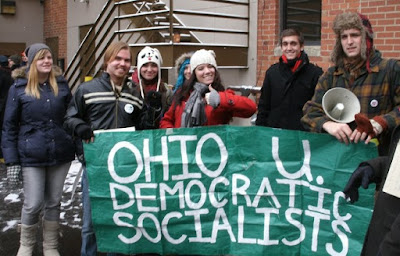 Only 23 per cent said they wanted a leader who didn't want to change things. Only 21 percent disagreed with the statement that our political representatives are "out of touch with the people". More than half disagreed with the statement that "New Zealand is a land of opportunity".
Discontent with the status quo was highest among the young, with nearly 80 percent of 18-24 year olds saying that they thought they got "a poor deal" compared to their elders.
All this suggests there is a fertile ground for a politics that offers real political change, with an impetus that is anti-capitalist. Why hasn't it happened? Why aren't we seeing the kind of political developments that we are seeing in the United States and elsewhere? Why has the mood for change translated into the centrist politics of the Labour-New Zealand First coalition government?
In the United States there is a genuinely left wing politics developing that is, crucially, independent of the Democratic Party. But much of what constitutes left wing politics in this country continues to be subservient to the electoral interests of the Labour Party. The formation of an anti-capitalist politics that is 'Made in New Zealand' has been straitjackted by a left that continues to insist that, even after three decades of slavish devotion to neoliberalism, Labour is preferable to National and represents a way forward. This has not been helpful. Right now, that way 'forward' has led to the limply centrist Jacinda Ardern and her coalition government.

CAPITALISM : THE GOD THAT FAILED