"Dysfunctional" Amherst Pelham Regional School Committee
So when a lawyer uses the term "deception" in writing we should all sit up and take notice. 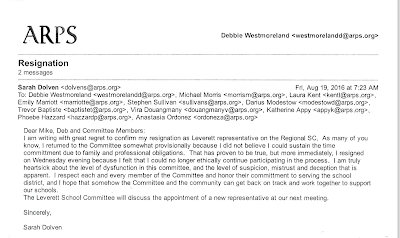 Click to enlarge/read
Especially when she is talking about something not related to ensuring a paying client gets a good legal outcome.

Although in this case her client is really the entire town of Leverett  and they will end up being the saps who have to help cover the $309,000 payout over this regrettable matter.  Along with Amherst, Pelham, and Shutesbury.

When I first heard a few days ago that she had resigned my initial response was hardly one of surprise.  In fact I'm a little surprised a few more have not resigned.  Because obviously some of them are in w-a-y over their heads.

The official minutes of the exceedingly long four executive sessions were supposed to be released a week ago.

And if rookie Chair Laura Kent is withholding them even after her committee voted to release them and after publication by the Daily Hampshire Gazette of the "draft" minutes,  the chances are astronomically good that she will also refuse to release the original five page email from Maria Geryk to her buddy, attorney Giny Tate, outlining her initial demands for a $600K payout.

Apparently in that deleterious document, which attorney Tom Columb -- an associate of Giny Tate -- repossessed, Geryk trashed the reputations of RSC members Baptiste, Cage and Robb.

Coincidentally enough the same three members who were critical of her stewardship as Superintendent in the annual evaluations that have yet to be officially released by the Regional School Committee.

Which seems to indicate someone gave those evaluations to Maria Geryk in advance.  Probably the same ones who happily voted for her $309K payout.

Top Wordpress Plugins You Need In 2020