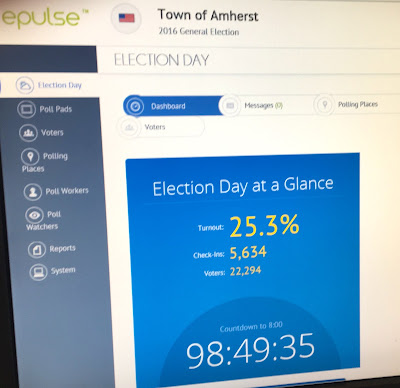 Town Clerk's computer 5:08 PM:  5,634 votes cast (about 1/3 UMass students) out of 22,294 bottom number is time until Tuesday election
Well I for one am willing to declare "early voting" a ballot box landslide success as Amherst already processed 25.3% of the registered voters in town.  Northampton did almost as well with 22.7%

So that means if Tuesday we have an average Presidential election turnout (around 65%) more than one third will not be clogging up the system because they already voted.

Unfortunately it will take an act of the state legislature to allow for early voting at our local annual election in the spring.  And with those more important elections only drawing an average turnout of 15.5% over the past ten years maybe early voting will stimulate a better turnout.

The Charter change in government question will be on the local ballot in the spring of 2017 and charter change questions always double the turnout, so early voting would still come in handy.

Nick Grabbe presentation to Charter Commission:  local election turnout fell from 29% in the 1970s to only 15.5% in the past ten years.  Pathetic!

How Universal Basic Income Gets Attra…
Wuhan Weather Report
CBD 2020: What to Expect + Our Top Pr…
Amidst Crypto Decline, BTC’s Trading …
Can I tell you the truth?