Mysterious-Terror-Womens Shooter-is- First Case-in-middle Java
By Felek Wahyu/Liputan6.com
on 28 Apr 2016 at 06:00 WIB
Liputan6.com, Semarang - Middle Java Police Police Team and Police Magelang today continue to search for the mysterious shooter perpetrators of acts of terror, especially to women in Magelang. The search is done by searching the area Magelang.
Head of Public Relations Police Commissioner Aloiysius Liliek, said the search is conducted in a number of places suspected terrorist hideouts at a women in Magelang. Team work openly or secretly. 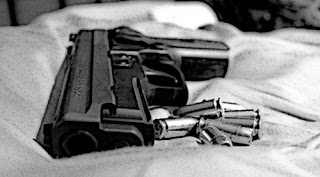 "The combined team of Regional Police and district police continue to search. Weask prayers may soon find the perpetrators," said Lilik, Wednesday, April 27, 2016.
The terror-related cases among women, Lilik said that if during a stint in Central Java terror cases to women for the first time this happened.
"It (the terror of women) the first case in Middle Java. What we are looking for is terrorists who works in mysterious ways. So we work as best as possible," said Lili.
Central Java police chief, Inspector General of Police Condro Kirono, who was installed specifically said it sent a team to place Genesis Case (TKP) to help uncover the shooting.
"Officers from the Criminal Investigation Directorate General and the Directorate of Regional Police had gone down to the location to investigate and arrest the perpetrators," said Condro Kirono, who handed over office, Monday (04/25/2016).
Acts of shooting, the police chief added, in addition to causing a number of casualties, also create fear, especially among women. "(Regional Police) take over. The location shooting was in the same area, 200 meters Area (Chinatown)," said the police chief.
Based on the investigation while, the origin of bullets fired from an air rifle. It was concluded from the buckshot were found at the scene. So far the police have examined nine witnesses related to the case of the mysterious shooter.