Exclusive : The Best Beaches of the World

Ask true beach lovers to name a favorite swath of surf and sand, and the answer changes with the tides. Luckily our planet is covered in oceans, seas, and lakes, which means there’s a beach to indulge any whim. From pearly crescents covered in shells to turquoise bays teeming with Skittles-colored fish, they’re not all created equal. 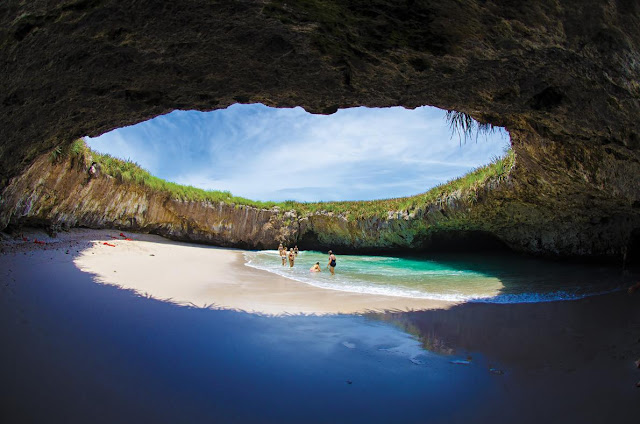 Sun peers through onto Playa del Amor in Marieta Islands, Mexico
Playa del Amor, Marietas Islands, Mexico: A swim through an opening nearly invisible from the sea reveals what locals call the “hidden Beach,” encircled by an impressive rock ring forming a natural oculus for the sun and sky. Only six visitors at a time can visit “Love Beach” via approved tour operators such as Punta Mita Adventures.
GEOLOGIC WONDERS 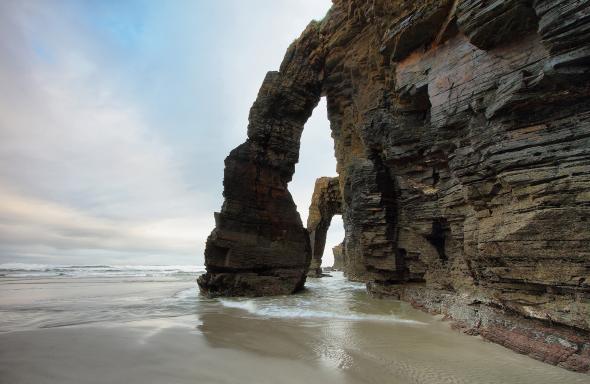 The rock formations that give Cathedrals Beach its name in Ribadeo, Spain.
Cathedrals Beach, Ribadeo, Spain: For a church visit like no other, head to Ribadeo, on Spain’s northwest Galician coast, where wave-carved, hundred-foot rock arches resembling flying buttresses of Gothic cathedrals line the sand. Walk among them at low tide, but beware, when the Bay of Biscay rises, the beach quickly succumbs to the surf. 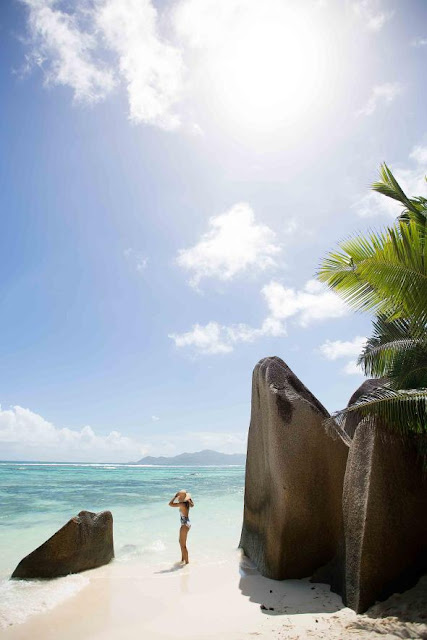 A woman stands in the sun on Anse Source d'Argent beach in La Digue, Seychelles.
Anse Source d'Argent, La Digue, Seychelles: With sun-dappled giant boulders, calm turquoise waters, snow white sand, and palm trees and jungle for greenery, this Indian Ocean beach seems created by a Hollywood set designer. It’s no wonder that it is often ranked as the most photographed beach in the world.
SOULFUL SOLITUDES 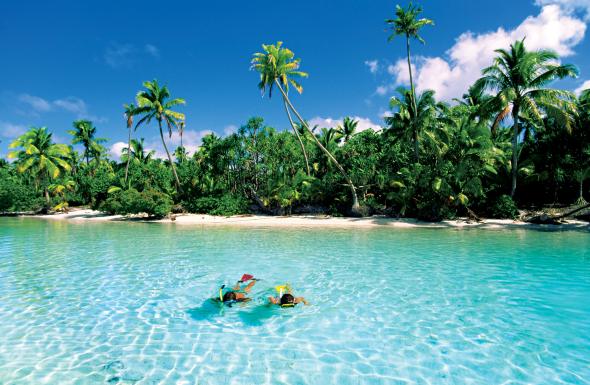 Snorkelers enoy the clear waters of One Foot Island in Aitutaki, Cook Islands.
One Foot Island, Aitutaki, Cook Islands: The marooned vibe is so palpable here it lured hit show Survivor to this 15-island atoll. Tapuaetai, “one footprint” in the local Maori dialect, is a short hop across the translucent lagoon, with a coconut palm-fringed shoreline you can trace in 15 minutes, but don’t rush, and don’t forget a footprint-shaped passport stamp from the hut turned post office. 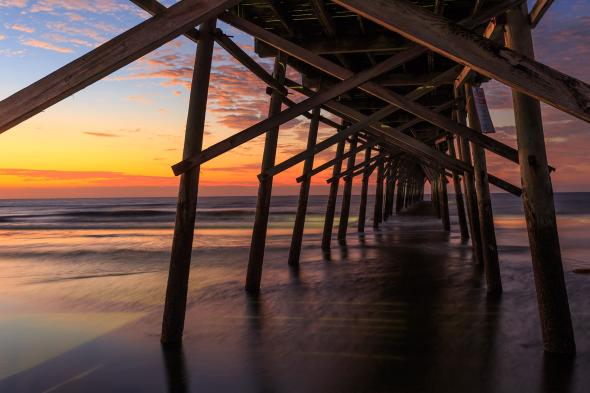 Under the pier of Sunset Beach in Brunswick Island, North Carolina a sunset paints the sky in beautiful colors.
Sunset Beach, Brunswick Islands,  North Carolina: At the west end of this remote beach, a mile from the access point, a solitary mailbox stands, planted by local Frank Nesmith in the ’70s, and continually replenished with notebooks inviting visitors to jot thoughts, dreams, wishes, and whatever else moves the spirit. 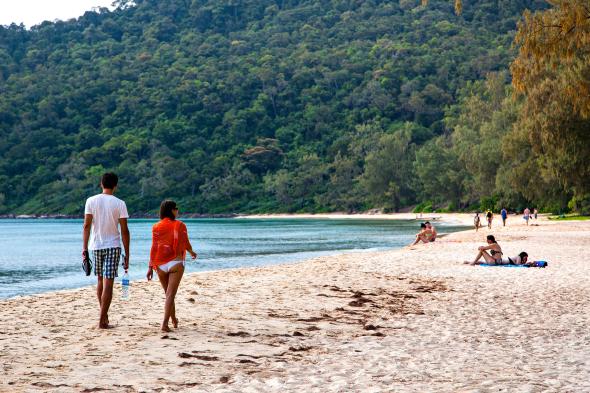 People walk on Lazy Beach on Koh Rong Samloem Island, Cambodia.
Lazy Beach, Koh Rong Samloem Island, Cambodia: If thatched-roof huts, crystalline waters, and silky sand beaches aren’t reason enough to hop aboard a wooden boat in Sihanoukville and join the 2.5-hour jaunt into the Gulf of Thailand, then take this beach’s name to heart and come to meander the jungle, nap in porch swings, and let life slow to a crawl.
SHELL SEEKERS 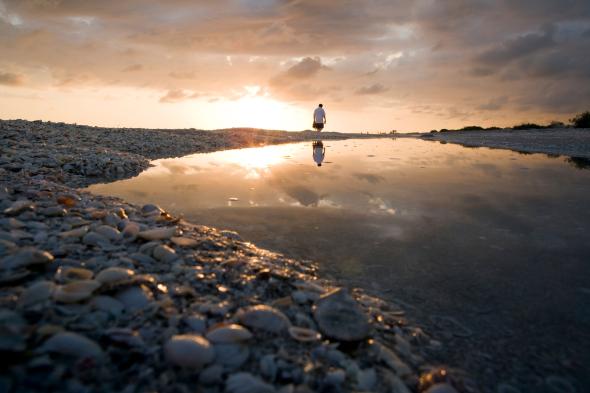 A visitor walks down Bowman's Beach at sunset on Sanibel Island, Florida.
Bowman's Beach, Sanibel Island, Florida: Shell hunters hunch in a stance dubbed the “Sanibel stoop” in search of conchs, coquinas, sand dollars, and dozens of other varieties that hitch a ride on Gulf of Mexico currents. Stock up on hats, buckets, and sunscreen at Bailey’s General Store, an island favorite. 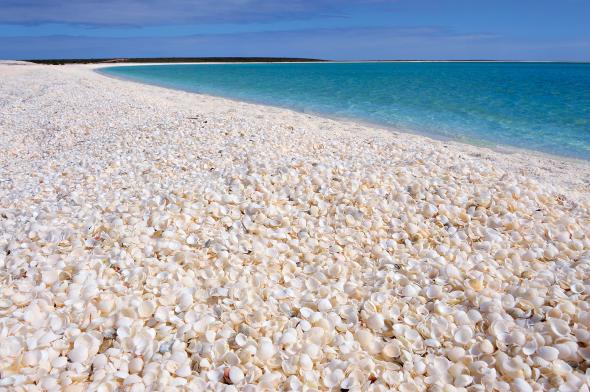 Thousands of tiny white shells fill the beach in Shark Bay, Western Australia.
Shell Beach, Shark Bay, Western Australia: On the edge of the continent, and part of the Shark Bay UNESCO World Heritage site, countless white cockleshells, up to 30 feet deep in some parts, spread for miles. Take nothing but pictures. Stop at Old Pearler Restaurant, built entirely of shells from this beach. 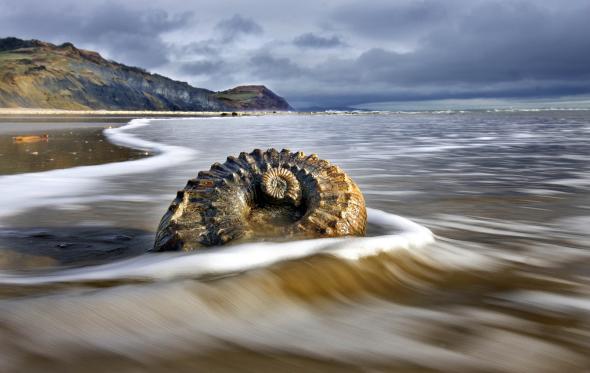 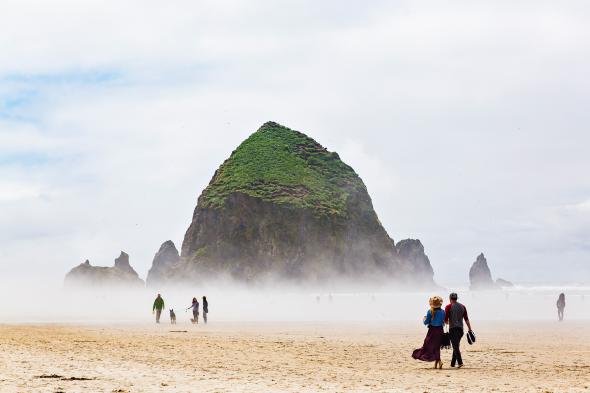 Mist fills Cannon Beach, Oregon, but that does not stop visitors from enjoying a walk.

Cannon Beach, Oregon: Rover is welcome on most of Oregon’s 400 miles of public beaches, including this wide ribbon of hard-packed sand that has the added eye candy of Haystack Rock looming offshore. An annual dog show unfurls in front of the Surfsand Resort each October. 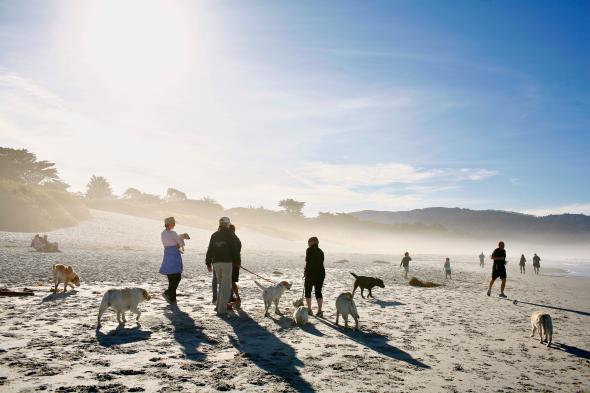 Visitors walk with their dogs along Carmel City Beach in California.

Carmel City Beach, Carmel-by-the-Sea, California: “It’s hard to say who gets more pleasure on Carmel’s beach: the pooches that can romp off leash, or their ‘pawrents,’ who can gawk at world-famous Pebble Beach to the north and Point Lobos to the south,” says Kelly E. Carter, author of National Geographic’s The Dog Lover’s Guide to Travel. 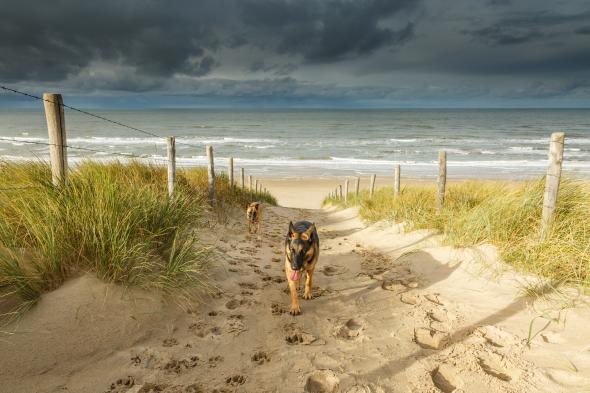 Dogs walk up from Noordwijk Beach, the Netherlands, on a stormy day.

Noordwjk Beach, The Netherlands: Past the tulip fields in south Holland, between Amsterdam and The Hague, the seaside town of Noordwijk has a separate dog beach for wild gambols by the North Sea. There are walking routes for human-canine bonding, and pooch-friendly restaurants and lodgings, including Take2 Beach & Bungalows, near the entrance to the dog beach. 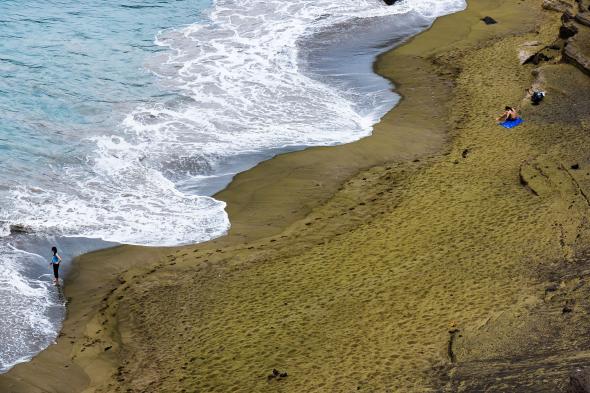 What may look like grass from afar, is really the Green Sands Beach on the Big Island of Hawaii.

Papakōlea Beach, Hawaii: This small cove gets its verdant good looks from tiny crystals called olivine, found in the rocks of the surrounding 49,000-year-old Puu Mahana cinder cone. Getting there requires a strenuous two-mile trek, but isn’t it worth it to leave footprints on one of the world’s few green-sand beaches? 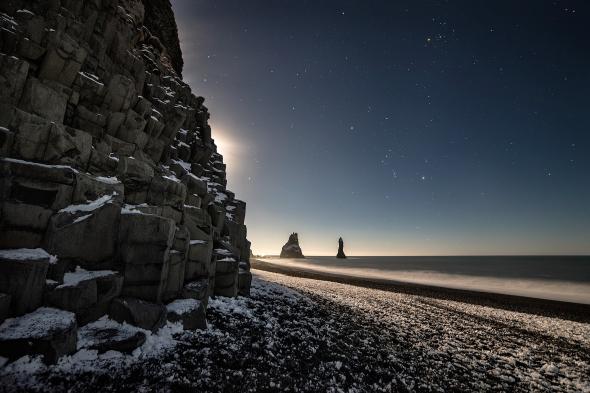 Moon lights up Reynisfjara Beach and the Basalt sea stacks in Iceland. 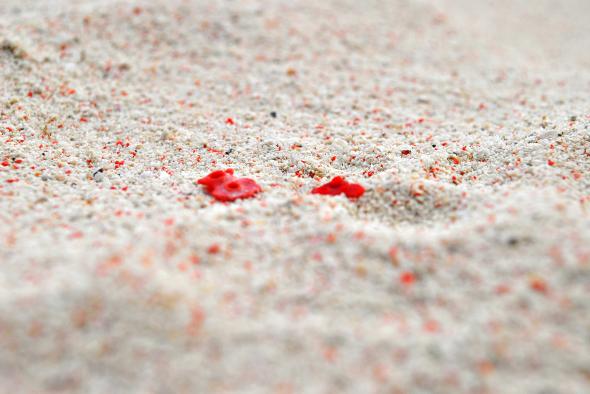 Red corals that break up in the sand make this Pink Beach on Great Santa Cruz Island, Zamboanga, the Philippines.

Pink Beach, Great Santa Cruz Island, Zamboanga, The Philippines: Hardly lacking in gorgeous beaches, the Philippines claims a pink-sand variety, too. The blush color comes from billions of pieces of crushed red organ-pipe coral, seen in every handful of sand. The number of visitors to the island is regulated, and advance arrangements should be made through the tourist office in Zamboanga. 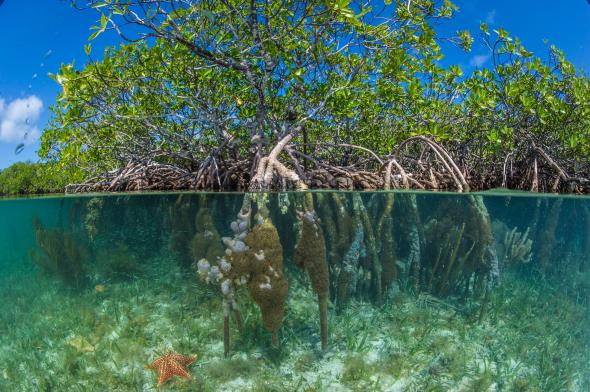 Red mangroves grow below and above the waters of South Water Caye Marine Reserve in Pelican Beach, Belize.

Pelican Beach, South Water Caye, Belize: “It’s the only place in Belize where you can swim safely to the reef within minutes and explore the South Water Caye Marine Reserve, full of colorful coral, angelfish, blue tang, sea turtles, all in less than 20 feet of water,” says guidebook author Lebawit Lily Girma. 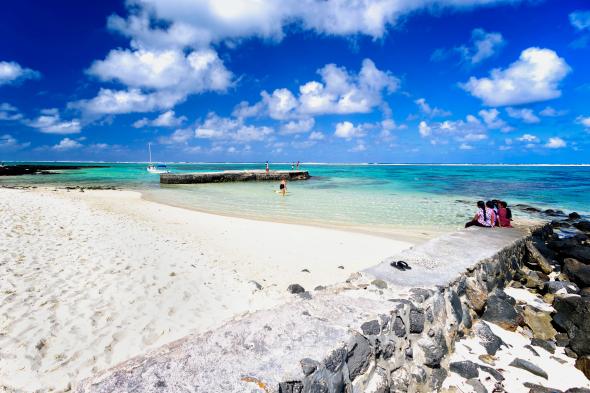 Beachgoers sit on a rock wall on Blue Bay Beach in Mauritius.

Blue Bay, Mauritius: Enter the Indian Ocean at the west end of the public beach and find yourself amid the parrotfish and other flashy underwater life thriving in the 872-acre Blue Bay Marine Park. The Shandrani Beach-comber Resort and Spa and the Blue Lagoon Beach Hotel also have swimmable access. 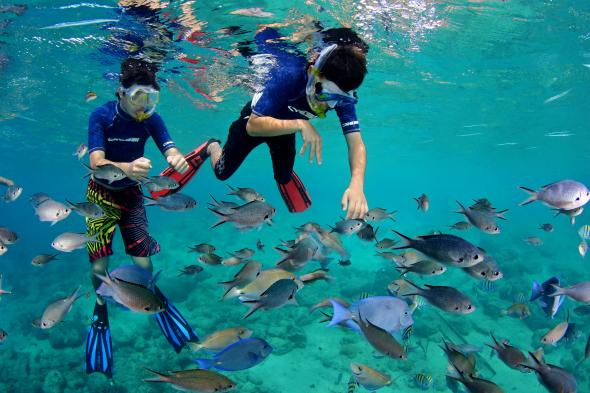 Cas Abao Beach, Curaçao: Ringed by reefs, Curaçao hides a Caribbean underwater wonderland, and this beach is one of the few sandy ones on the arid island, with a bar and a shop to rent snorkel gear. Slip straight into the shallow crystalline bay alive with sea fans and coral, tropical fish, sponges, sea turtles, and more. 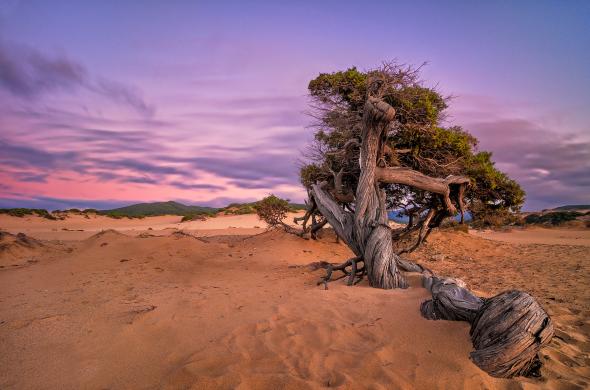 A fallen tree lays in the sand on Piscinas Beach, Sardinia.

Piscinas Beach, Arbus, Sardinia: Sculpted by the mistral wind and embellished with juniper bushes and olive trees, the Piscinas Dunes paint a mercurial backdrop on Sardinia’s southwestern Costa Verde (Green Coast). A former mining warehouse, Hotel Le Dune Piscinas sits at the edge of the Mediterranean Sea, with ample windows and lounge spots for admiring the ever changing canvas of sky, sand, and waves. 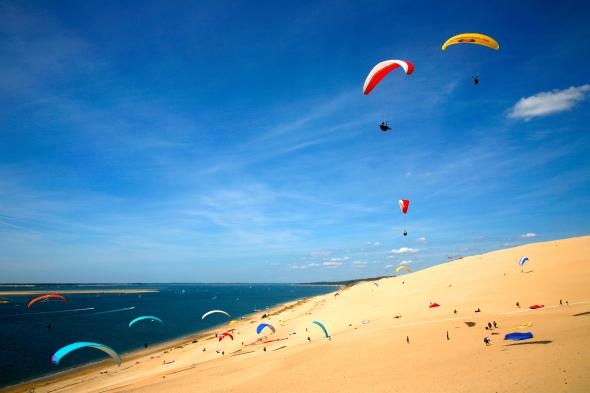 Paragliders fly over a dune on Corniche Beach in La Teste-De-Buch, France.

Corniche Beach, La Teste-De-Buch, France: At 357 feet high, 1,640 feet wide, and 8,800 feet long, the pine forest–hugged Dune of Pilat is the highest in Europe and tumbles to Corniche Beach on the Atlantic Ocean. Climbing is okay, but go for views the birds brag about and hitch a 10-minute paraglide ride with Pyla Parapente over the geomorphic monument.

Exclusive : The Best Beaches of the World