Stung by a 19-year-old student's “audacity“ in overtaking his top-end Range Rover, JD(U) MLC Manorma Devi's son Rocky Yadav allegedly shot dead Aditya Sachdeva, who was travelling in a Swift Dzire with his friends, late on Saturday . Sources said Rocky is a member of the Rifle Club in Delhi.

While Rocky , 23, is on the run, his father and MLC's husband, Bindi Yadav -charged in 2011 with sedition for storing 6,000 rounds of assault rifle bullets -was arrested for “harbouring“ the alleged killer. The Range Rover, which costs upward of Rs 1 crore, was seized from the MLC's residence. Incidentally, a Swift Dzire comes for less than Rs 8 lakh on the road.

The killing by the JD(U) MLC is bound to further embarrass chief minister Nitish Kumar and escalate attacks against his government for sliding law and order. Scandalously , the killing took place in the presence of a cop guarding the VIP's son. Some re ports even said that the policeman fired in the air to force the Swift to stop.

“People call Nitish `Susasan Babu' but his own legislators and their family members are taking law in their hands. The killing of the Gaya youth is not the only instance,“ said Hindustani Awam Morcha spokesman Danish Rizwan. In January, JD(U) MLA Sarfaraz Alam was charged with molesting a woman on board Dibrugarh Rajdhani Express for which he was suspended from the party and an FIR filed against him.Then, RJD MLA from Nawada, Rajballabh Yadav, was accused of raping a minor girl in February and is now in jail.He too was suspended from RJD. Also, JD(U) legislator Narendra Kumar Neeraj along with his bodyguard was booked for beating up a driver in Banka last month. 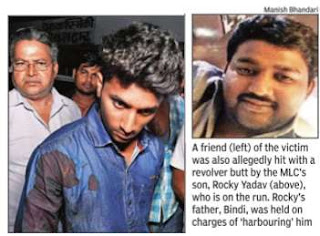