There comes a point in most people’s lives where they will have to do a bit of public Speaking, Whether you end up being the best man toasting the groom during a wedding, or having to do a ‘make-or-break’ presentation for your university degree, public speaking is like jury duty, it is hard to get out of. For many of us, the very thought of standing in front of people, talking and showing things, is enough to leave us in a cold sweat. Paranoid fears of messing everything up or making a verbal faux-pas and embarrassing yourself in front of a whole bunch of people paralyse you, and in a slightly ironic self-fulfilling prophecy, those jitters and fears end up making you screw up the big talk. Big time.

For many people, it is preferable to be buried alive than to get up on stage, but public speaking, such as presentations of quarterly results, speaking at conferences and of course, those cringeworthy wedding speeches, are an important part of becoming successful in both our professional and personal lives. You only have to think of great figureheads such as Martin Luther King, Nelson Mandela, Margaret Thatcher and Malala Yousafzai to understand that many of these people get their message across because they are great orators. 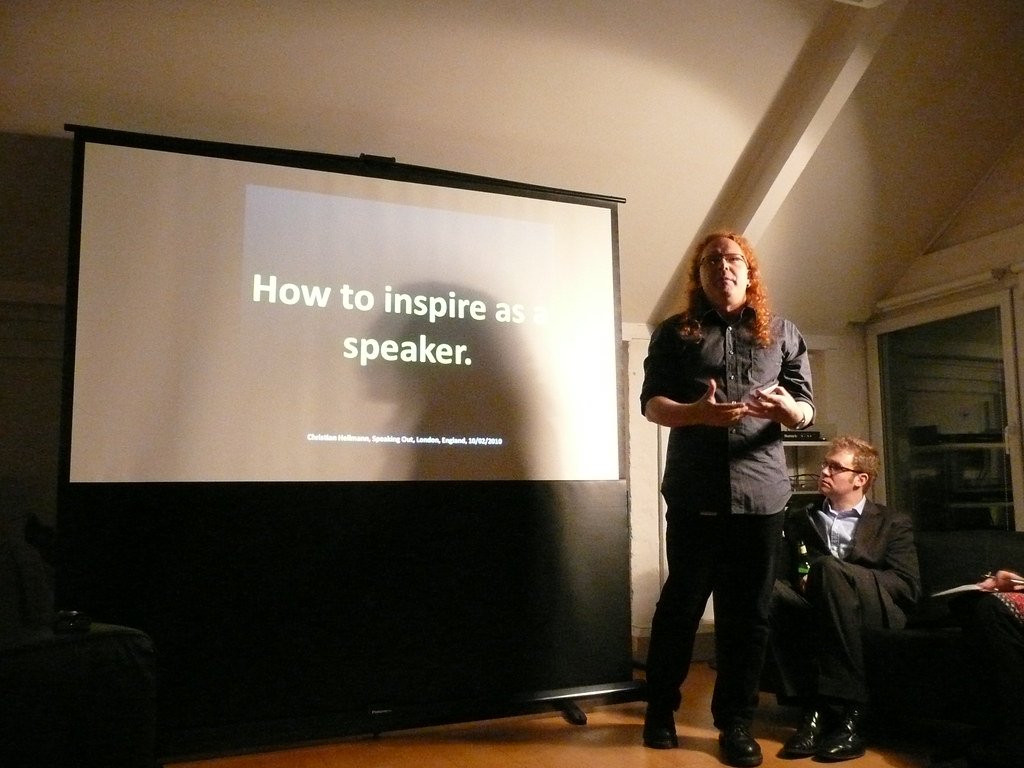 A Peruvian non-verbal language analyst and biology expert in human behaviour and neurocommunication, Miguel Figueroa, had published a book “Rompe el miedo y habla en público”, whose English title translates as Breaking Fear and Speaking in Public, late last year, in which he advises on ways to vanquish the trauma associated with public speaking, especially for first-timers. In a special tete-a-tete with Spanish-language online magazine GrandesMedios.com, Figueroa suggests techniques you can adopt to master the fear of speaking to an audience, as well as improving your expression skills.

When sitting down for interview or presenting at conferences, for example, you may notice people touching or holding their feet. That is because, in an unconscious way, we instinctively protect the soles of our feet, due to their perceived vulnerability. According to Figueroa, placing the bottom of your feet and holding your feet can help relax you and dissipate any nerves. This is due to a ‘hormonal chain reaction’ that encourages relaxing mindsets, according to Figueroa.

While it is not always possible at all public speaking occasions, taking a seat can help you feel more comfortable and less ‘exposed’. Sitting helps provide mental and physical stability and, according to Figueroa, imparts a sense of confidence and authority of the speaker in the audience’s eyes, like a monarch proclaiming to their court from the throne.

3. Go walkabout and let your feet do the talking

Figueroa advises that public speakers should move around on their feet. At first this may seem strange advice. Surely, you might be thinking, trotting around the stage is the surest sign of nervousness. But Figueroa says that it is in the way you walk. You should take measured steps, first placing your heel on the ground, then bringing the arch down, followed by the toes. By doing this, you will avoid the quick rushed steps associated with someone who is frightened out of their wits, helping you feel more in control of the situation and again, upping the confidence levels, in both your and your audience’s perception.

Another foot technique to help you relax. Figueroa advises that a few minutes before you go out there and wow them with your wise words, you should find somewhere a bit private where there is a table or desk and literally put your feet up. Doing this will tell our brains that we are relaxed and calm, helping quell the  flight-or-flight feelings currently whizzing through our minds. This tip is especially useful for people attending interviews or auditions, who can do this in the waiting room or lobby before they go. However, do not do this in a public area and especially not in front of your audience. I do not have to tell you that it is the height of bad manners.

5. Do a little striptease

No, we are not advising you to do a sweaty nerve-wracked Full Monty in front of your audience, but Figueroa explains that hiding your hands when speaking is not a good idea as it tells your audience that you are nervous or insecure. To maintain your look of confidence, the best thing to do if you are wearing a long-sleeved garment, is to simply roll up your sleeves, ideally to your elbow.

The ancient Egyptians saw the pyramid as an important cornerstone in their respect for the dead. It is this humble shape that can also help you bury the feelings of awkwardness in your public speaking. Figueroa suggests placing your hands together with palms slanted towards each other, fingertips touching so that your hands make a sort of pyramid. This hand position suggests balance and intelligence, and is an ideal gesture for saying concrete things, giving messages in depth and when concluding a speech or a negotiation dialogue.

Extending out our hand and fingers, such as when you move your hands when talking, has the advantage of telling you brain that you are in tiger mode, ready to pounce and actively engage the audience. In the audience’s eyes, constant and passionate movement of the hands suggests you want to get their attention and have important mission critical things to say. It also conveys confidence and engagement. A familiar gesture used by expert public speakers is the ‘what to do?’ position.

The last technique Figueroa suggests is to use an object that will act as a barrier and help keep fear away. By holding an object, such as a pointer or a pen, the object serves as a ‘safety placebo’ which will trick the brain into thinking that everything is safe and calm. It is a comforting crutch on a psychological level, and is something that is a legacy of our childhoods from when we would take a stuffed toy to bed before sleep to keep away the big bad monsters in the dark. The barrier can also act as a distraction from negative thoughts or worries, and can be useful for the practicalities of pointing out things to an audience in a presentation.

Subscribe to Halfeatenmind | News And Views From A Partially Di