TOKYO — As an extraordinary two-week Quarantine of a cruise Ship ends Wednesday in Japan, many scientists say it was a failed experiment: The ship seemed to serve as an incubator for the new virus from China instead of an isolation facility meant to prevent the worsening of an outbreak.

Since the virus was identified late last year in central China, it has sickened tens of thousands of people and killed more than 1,800.

As of Tuesday, 542 cases of the virus, known as COVID-19, have been identified among the 3,711 quarantined passengers and crew, making the ship the site of the most infections outside of China. The Diamond Princess Cruise Ship is also the only place where health officials have seen the disease spread efficiently beyond China.

The question now is: Why? 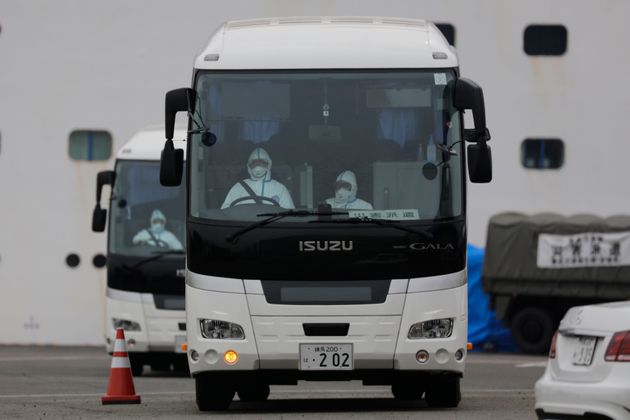 Two buses leave a port where the quarantined Diamond Princess cruise ship is docked in Yokohama on Saturday, Feb. 15.

The Japanese government has repeatedly defended the effectiveness of the quarantine. But some experts suggest it may have been less than rigorous.

In a possible sign of lax quarantine protocols, three Japanese health officials who helped in the quarantine checks on the ship were also infected.

“There are sometimes environments in which disease can spread in a more efficient way,” said Dr. Michael Ryan, executive director of the World Health Organization’s health emergencies program. Ryan said cruise ships in particular were known to occasionally accelerate spread.

“It’s an unfortunate event occurring on the ship and we trust that the authorities in Japan and the governments who are taking back people will be able to follow up those individuals in the appropriate way,” he said.

Japan’s health minister, Katsunobu Kato, told reporters Tuesday that all passengers who remained on the cruise ship have had samples taken and that those who tested negative would start getting off the vessel beginning Wednesday, when their required 14-day quarantine is scheduled to end. 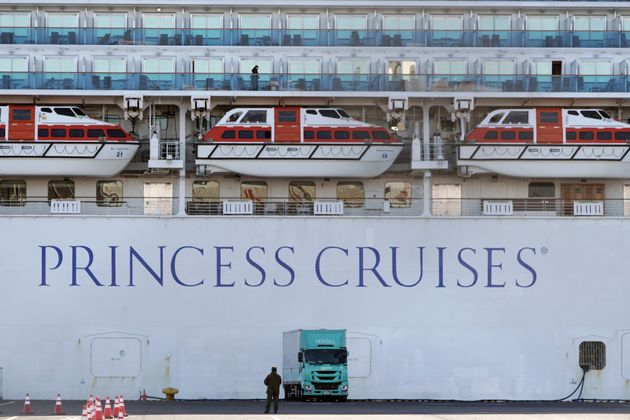 A passenger stands on the balcony of the quarantined cruise ship Diamond Princess on Sunday, Feb. 9.

“They all want to go home as early as possible, and we hope to assist them so that everyone can get home smoothly,” Kato said.

The process is expected to take until Friday because of the large number of people involved.

“Obviously the quarantine hasn’t worked, and this ship has now become a source of infection,” said Dr. Nathalie MacDermott, an outbreak expert at King’s College London.

She said the exact mechanism of the virus’ spread was unknown. Although scientists believe the disease is spread mostly by droplets — when people cough or sneeze — it’s possible there are other ways of transmission.

“We need to understand how the quarantine measures on board were implemented, what the air filtration on board is like, how the cabins are connected and how waste products are disposed of,” MacDermott said.

“There could also be another mode of transmission we’re not familiar with,” she said, noting the possibility of environmental spread and the importance of “deep-cleaning” the entire ship to prevent people from touching contaminated surfaces. 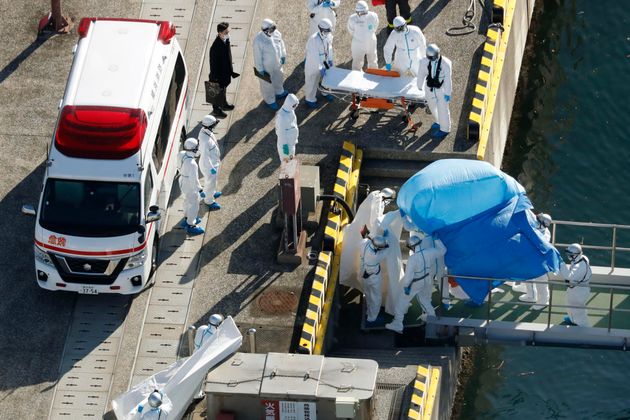 Medical workers in protective suits lead a passenger who tested positive for a new coronavirus on the Diamond Princess cruise ship on Wednesday, Feb. 5.

During the 2002-2003 outbreak of SARS, a related virus, more than 300 people were infected through a defective sewage system in a Hong Kong housing estate. MacDermott said it was possible there was a similar issue aboard the Diamond Princess.

“There’s no reason this (quarantine) should not have worked if it had been done properly,” she said.

Cruise ships have often been struck by outbreaks of diseases like norovirus, which can spread quickly in the close quarters of a boat and among elderly passengers with weaker immune systems. But MacDermott said it would be highly unusual for an entire boat to be quarantined.

“They might quarantine the people affected in their rooms until they’re 48 hours clear of symptoms, but certainly not all passengers,” she said.

Some passengers on the Diamond Princess described the ship as a “floating prison” but were allowed to walk on the decks every day while wearing a mask and were told to keep their distance from others.

“I suspect people were not as isolated from other people as we would have thought,” said Dr. Paul Hunter, a professor of medicine at the University of East Anglia in England. He said the continued spread of the virus could be due to compliance problems. 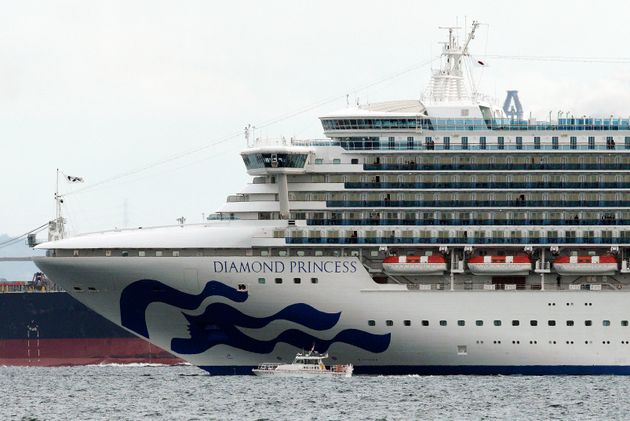 Japanese health officials are conducting extensive medical checks on all 3,700 passengers and crew of the cruise ship that returned to Japan after one passenger tested positive for the new coronavirus.

“It’s difficult to enforce a quarantine in a ship environment and I’m absolutely sure there were some passengers who think they’re not going to let anyone tell them what they can and cannot do,” he said. He suggested that if the passengers had been quarantined on land, having more space might have allowed for better infection control procedures. But he acknowledged that attempting to quarantine more than 3,700 people was logistically challenging.

Hunter said it was “a huge disappointment” that the quarantine hadn’t curbed the spread of the virus and that it was unfortunate some passengers returning to their home countries would now face a second period of isolation.

“Given how the virus has continued to spread, we have to presume everyone leaving the ship is potentially infected, and therefore they have to go through another two-week quarantine period,” he said. “Not to do so would be reckless.”

Japanese health officials say a 14-day quarantine on the ship is adequate, noting that all but one of more than 500 Japanese returnees from the epicenter of the virus in China who initially tested negative were found to be virus-free at the end of their 14-day quarantine. 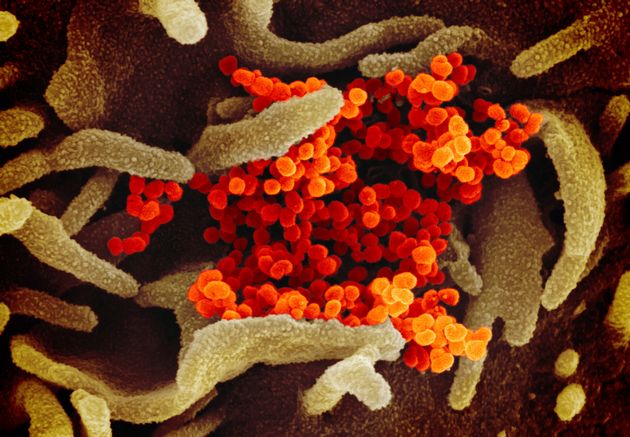 This undated electron microscope image made available by the U.S. National Institutes of Health shows the Novel Coronavirus SARS-CoV-2, orange, emerging from the surface of cells, green, cultured in the lab.

Those officials also defended precautions taken on the ship. About 1,000 crew members were told to wear surgical masks, wash their hands, use disinfectant sprays and stop operations at restaurants, bars and other entertainment areas after Feb. 5, when the first group of 10 infections was reported and the start of the 14-day quarantine was announced.

Passengers were instructed to stay in their cabins and not walk around or contact other passengers. Those in windowless cabins could go out on the deck for about an hour each day.

The quarantine was largely for passengers because crew members kept sharing double rooms and continued to serve guests by delivering food, letters, towels and amenities, and entering passenger cabins for cleaning. Crew members also ate in groups in a crew mess hall.

“Unlike passengers, crew members share their rooms, they share food, and that’s why some of them are infected even after the quarantine started,” said Shigeru Omi, a former regional director for the World Health Organization. 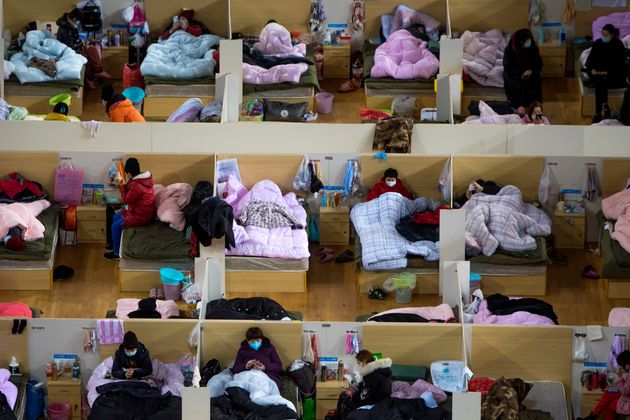 Patients infected with the coronavirus take rest at a temporary hospital converted from the Wuhan Sports Center in Wuhan in central China’s Hubei Province on Feb. 17.

Omi said quarantine is one of the measures considered effective early on. But the virus has already made its way into local communities across Japan, where untraceable cases have been popping up, he said.

At this stage, “the spreading of the virus will be inevitable, and that’s why quarantine is out of the question,” Omi said.

He said the focus now should shift from border control to preventing the spread in local communities.

Other scientists said that passengers should have been removed from the ship from the beginning.

“Boats are notorious places for being incubators for viruses,” said Arthur Caplan, a professor of bioethics at the New York University School of Medicine. “It’s only morally justified to keep people on the boat if there are no other options.”

Caplan said that a second quarantine was warranted, but that officials had done a poor job of explaining what would happen if their original plan failed.

“It’s never good to lose your civil liberties and your rights of movement, but two more weeks of quarantine is not an undue burden if you’re trying to protect spread of a disease,” he said.