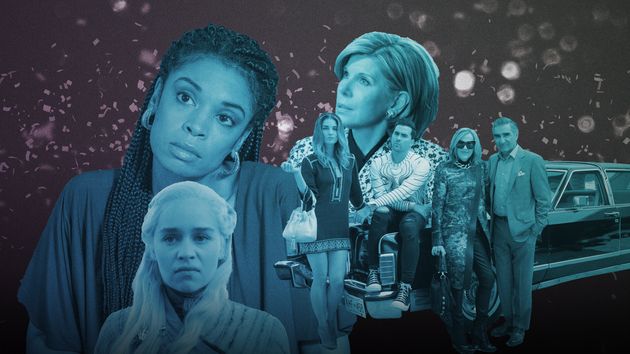 The nominations for the 2019 Emmy Awards were … actually good? But, of course, we still have some complaints.

The Television Academy announced the nominations Tuesday morning, and there we some major snubs ― Julia Roberts for “Homecoming”! ― and a dozen welcome surprises ― “Schitt’s Creek”!

To commiserate, HuffPost’s Leigh Blickley and Cole Delbyck share their thoughts on the biggest, most shocking nominees. And the most maddening.

SNUB: “The Good Fight” for literally everything

Can someone please procure a CBS All Access subscription for Emmy voters because this erasure of “The Good Fight” will not stand. The critically beloved spinoff of “The Good Wife,” which received plenty of awards in its time, has once again been snubbed, and it’s safe to say we object. No show has better tackled what it’s like to live in Donald Trump’s America with straight-from-the-headlines stories that raise pressing questions about truth and justice in a time when both seem out of reach. The Series also employs an impressive roster of New York City theater actors, who populate the series as morally corrupt lawyers, feisty judges and Machiavellian murderers. And if series lead Christine Baranski micro-dosing on acid while holding men in power accountable isn’t award-worthy, we truly don’t know what is. ― Cole Delbyck

Holy Schitt, you guys! Pop TV’s irresistibly charming series about a wealthy family who loses everything and rebuilds their lives in the titular and aptly named small town finally received some recognition. Aside from a long-overdue nod for Outstanding Comedy Series, series creator Dan Levy (Daviiiid!) and comedy legend Catherine O’Hara also scored nominations after years of outright snubs. And if that wasn’t enough, the series was also honored in the Outstanding Contemporary Costumes category thanks to O’Hara’s character’s ever-evolving and seriously iconic wardrobe. If we had our way, everybody on the show would feel the award love ― the absolute bop “A Little Bit Alexis” written for the show deserves ― because, as David’s paramour Patrick once sang, they are simply the best. ― CD

SNUB: Susan Kelechi Watson, “This Is Us”

Season after season, Watson has soared as Beth, the ambitious, rock-steady wife of Randall (Sterling K. Brown), the adopted black son of Jack and Rebecca Pearson (Milo Ventimiglia and Mandy Moore). But her role took on a new layer this year as Beth broke away from the supportive partner mold and seized a few opportunities for herself. It’s a shame Watson wasn’t recognized for her stunning work in Season 3, but hats off to Brown, Ventimiglia, Moore, Chris Sullivan, Michael Angarano, Ron Cephas Jones and Phylicia Rashad for nabbing nominations in various acting categories. This season required many, many tissues. ― Leigh Blickley 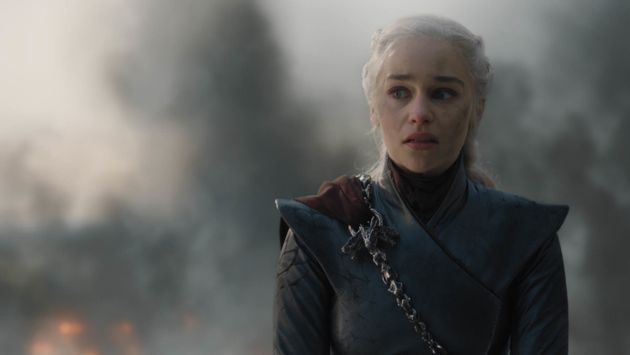 Emilia Clarke in “Game of Thrones.”

SURPRISE: “Game of Thrones” for writing

“Game of Thrones” scored a whopping 32 Emmy nominations for its eighth and final season, but one stood out among the pack: David Benioff and D.B. Weiss for Outstanding Writing for the series finale, “The Iron Throne.” Sure, this show is beloved by many, and “The Iron Throne” was watched by nearly 20 million viewers. But the writing was panned all season long as storytelling was rushed and plot points were forgotten. Although the performances, directing and effects were incredible ― kudos to so many of the actors getting their due ― it appears the academy is celebrating the writing on the series as a whole and not taking into consideration the critical responses to the final episodes. ― LB

Um, hello, Emmy voters? Did none of you watch the weirdest, most mind-boggling singing competition show ever created? “The Masked Singer” took TV by storm when it premiered earlier this year, introducing the U.S. to a concept first created in South Korea. On the show, celebrities face off against one another while disguised in elaborate costumes, which conceal their identities. Each week the panel of famous judges attempts to guess who is under the masks, until a winner is revealed. It’s ridiculously epic stuff. Award-worthy stuff. ― LB

SNUB: The women of “Pose”

FX’s groundbreaking series “Pose,” from the minds of Ryan Murphy, Steven Canals and Brad Falchuk, picked up nominations for Outstanding Drama Series and Outstanding Lead Actor in a Drama Series for national treasure Billy Porter. But standout performers Mj Rodriguez and Indya Moore received zilch. It’s not only that their nods would’ve been history-making ― Rodriguez would’ve been the first trans woman to receive a nomination in the Outstanding Lead Actress category ― but their stories are the beating heart of the series, which has only improved in its second season. Rodriguez, in particular, bares her soul week in and week out, beautifully communicating the joys and heartbreaks of a young trans woman diagnosed with HIV who becomes the surrogate mother to a group of LGBTQ youth. ― CD 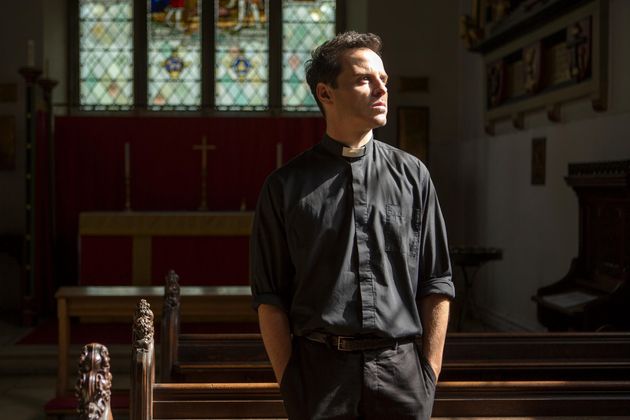 After waiting years for a second season, Phoebe Waller-Bridge’s Amazon  comedy series delivered the godly goods. It was a welcome sight to not only see Waller-Bridge nominated for lead comedy actress but also to see so many supporting women be represented on the docket as well, including Olivia Colman, Sian Clifford, Kristin Scott Thomas and Fiona Shaw. The show earned 11 noms in total. But… ― LB

SURPRISE: All the love for “Russian Doll”

Netflix’s sweet birthday baby “Russian Doll” made a strong showing on Emmy nomination morning, positioning the Natasha Lyonne-fronted series as a major contender come award season. And it’s well-deserving of all the love, as the series explored generational trauma, grief and the changing, gentrifying forces of New York through the lens of a woman who repeatedly dies and relives the same night of her 36th birthday celebration. In eight episodes, the series dug deep into its lead character’s psyche but turned into something truly special by introducing Alan (Charlie Barnett), who’s also living and dying on a loop. Thankfully, “Russian Doll” is coming back for a second season, so we don’t have to watch its first outing over and over and over again. ― CD

SNUB: “The Haunting of Hill House,” in general

This one might be controversial, but someone’s got to say it: “The Haunting of Hill House” was great. The series, which follows the Crain siblings as they come to terms with their traumatic childhood up in a haunted house, was gripping, trippy and utterly bingeable. Sure, there were some mishaps — what was up with that ending? — but the performances given by the likes of Elizabeth Reaser and Victoria Pedretti are can’t-miss. For a ghost story to not only be terrifying but dramatically compelling is a feat, so why has it been ignored? ― LB

SURPRISE: Christina Applegate, “Dead to Me”

The twisty Netflix comedy series has earned a ton of support since it premiered in May. But to say Applegate’s lead comedy actress nomination was expected would be a lie. However, we’ll take it! She gives a career-defining performance as Jen Harding, a widow whose life turns upside-down when she meets fellow mourner Judy Hale (Linda Cardellini) at grief counseling. Applegate has won an Emmy before for her role as Jennifer Aniston’s sister in “Friends,” but she hasn’t been nominated since “Samantha Who?” in 2009. YAY, Christina! ― LB 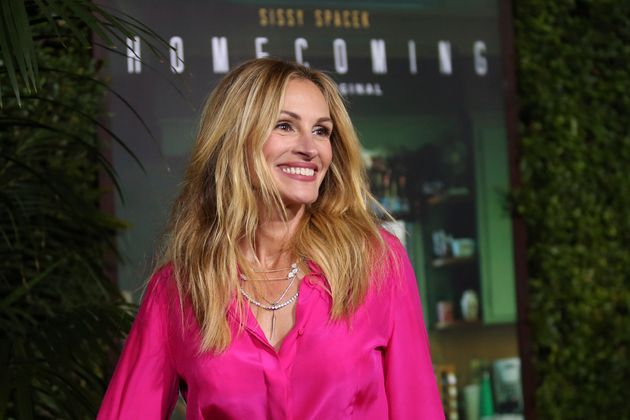 Julia Roberts at the Los Angeles premiere of “Homecoming.”

American icon Julia Roberts suffered through an entire season of Amazon’s psychological thriller in an ill-fitting wig all for naught. The Oscar winner was notably absent from the Outstanding Lead Actress in a Drama category for her first major television series role despite picking up a Golden Globe nomination in January. The Sam Esmail-directed series was a welcome showcase for the actress who’s made her career emoting with a capital E on the big screen, because it allowed her to sink into a subtler, more nuanced performance. But Roberts doesn’t seem too bothered by the snub, joking on her Instagram that she’s in exceptional company with fellow A-listers George Clooney and Emma Roberts, who also didn’t receive nominations. On that note, is there an award for best celebrity Instagram? ― CD

The Emmy nominations might’ve dimmed some of the Netflix series’ shine, but “Glow” has always been about the underdog. Despite blessing star Betty Gilpin with a second nod, the female-led wrestling series was left out of the pack after an even more impressive second season. The show expertly tackled the difficulties of navigating male-dominated spaces as the motley crew of professional wrestlers refused to let the whims of TV executives, coaches and even lovers stop them from reaching glory. And audiences were even treated to a full-blown episode of the show-within-the-show late in the season, as we witnessed the product of the characters blood, sweat, tears and more, yes, more sweat. As for the snubs, we want a rematch! ― CD

The post The Biggest 2019 Emmy Nomination Snubs And Surprises appeared first on CommentWise.