Did Kenya Rope In The Maasai Tribe To Enforce A Lockdown? A Fact Check 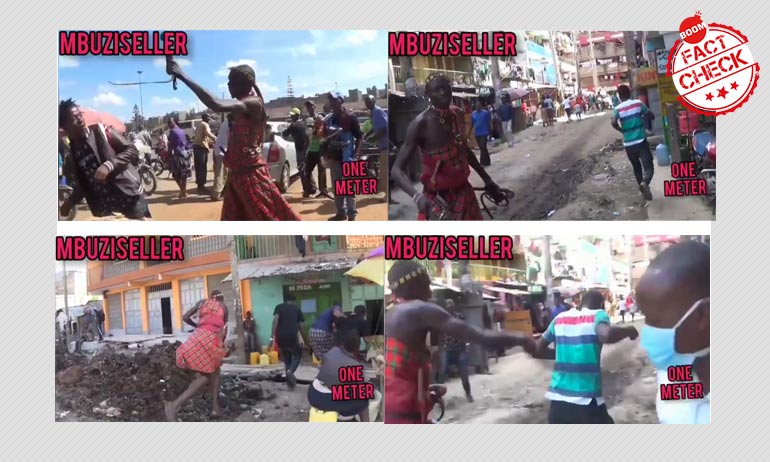 An awareness video by a Kenyan comedian to inform people about the necessity of maintaining social distancing in the backdrop of the COVID-19 outbreak is viral with misleading claims on social media. The video shows the comedian cracking a whip on youngsters who are loitering around in public spaces despite the lockdown.

Antique Anatolian Rugs
Kraken OTC’s 8 out of 10 trades are i…
My Killer Curves Open Doors For Me – …
Why We Need to Sanctify Ourselves
Afraid or not, life still marches for…

It is doing the rounds on social media with claims that the Kenyan government has set the Maasai Tribe on people and are adopting harsh steps for those who are flouting lockdown rules in the country.

BOOM reached out to the comedian, Arisa Nelson, who confirmed that the video is purely for awareness purposes. Several countries have announced strict lockdowns post the global COVID-19 pandemic, to contain the spread of the virus.

The video is viral with the caption, "The Kenyan government uses the Maasai tribe for the curfew decision after the police failed to implement it because people are not afraid of the police , (Massai tribe don't consider a man as a brave one Without killing a lion with his stick ) so the government asked their leader to bring his men to the cities and implement the curfew, within 24 hrs, not a single ant was seen in the street"

You can see the video below. Similar Facebook posts have been archived here and here.

The video has been shared widely on Facebook with the misleading caption. 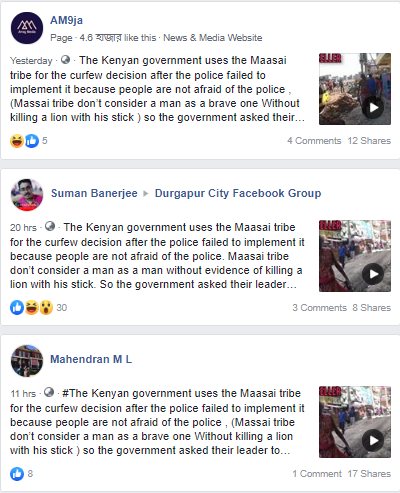 BOOM also received the video via its WhatsApp helpline for verification.

Kenya has a dusk to dawn curfew in place to curb the transmission of the virus, which has infected 158 people in the country. Four people have died so far. The Kenyan police however has been criticised for the extreme means adopted to maintain the curfew. According to reports, a 13-year-old boy was shot and killed on his balcony in Nairobi as police moved through the neighbourhood, enforcing a coronavirus curfew.

We found a longer version of the video that was uploaded by one Arisa Nelson, a YouTuber based in Nairobi, Kenya. The video was uploaded on April 2, 2020. Further, there are no reports of the Kenyan government deploying the ethnic Maasai tribe to make people stay at home.

The name of Nelson's channel is Mbuzi Seller. BOOM reached out to Arisa Nelson, who confirmed that the video was made for awareness and entertainment purposes and was not related to the Maasai tribe of the country. Nelson said, "It was made for entertainment but has an educational message for our society. I am telling people to maintain a distance of one meter through the video."

Below is the longer video uploaded by Nelson. Furthermore, the video is tagged with words like "Tanzania", "comedy" and "entertainment" in local Swahili language, which implies that it is for comic purposes only.

Mbuzi Seller's Facebook page also states that he is a comedian and a self motivated actor. The page is run by Arisa Nelson. Another comic video of Nelson can be seen here.

Also Read: No, This Video Does Not Show Body Bags In A New York Hospital

Did Kenya Rope In The Maasai Tribe To Enforce A Lockdown? A Fact Check