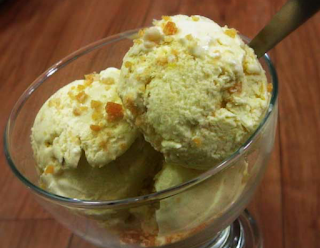 You can never imagine that without the fridge and without the machine, instant butterscotch Ice Cream can also be made. So I will say yes yes why not in today's world nothing is impossible.

Today we are about to make a butter and non-fridge machine without ice cream and that too in just five minutes. So let's see what things will be required to maintain our ice cream.

To make butterscotch ice cream, first, pour milk into a bowl and then mix it well by putting fresh cream in it.

Now add sugar powder in it and mix it well so that the sugar powder dissolves well in the milk. (You can make sugar more or less according to your taste). We do not have to do much to make this ice cream.

Now add half a teaspoon butterscotch essence in it and add yellow food and also add it. Because Butterscotch is of Yellow Karl, add both these things and mix the milk well and put the butterscotch nut in it as well. Save for a little more decorating. Now the mixture is ready to fit our ice cream.

Now what we have to do next, you can take two polyethene if you wish to take zip-locked polyethene. Which comes on the market but we have taken simple polyethene here because you are told to make ice cream from whatever you get in the house easily.

We have taken two plasma polythene. Now, what is it to do first, put the mixture that I have made with milk, put it in a polythene and put a rubber on top, by tighter, you just have to take care of it that it has to close very tight. So that does not leave them a little too far. That is why I have told you that you can also take a polythene of people.

Now put half the ice in another polyethene and put one teaspoon salt and then put the mixture in the second polyethene inside it. Then put the rest of the remaining ice on top and then add a tsp salt and top over it.

Now we will also tighten it by a tie-in with any rubber or band. And then we will take a towel and make this packet well in the towel and rake it well. And then for five to seven minutes, we will shake it (keep moving with your hands) after opening it, set it open and see our ice cream is frozen.


Now we will open it and pick out ice cream polo side. Then open it and remove the ice cream in a serving bowl, decorate it with a butterscotch nuts above the top and serve yourself and enjoy yourself.