Chinese space station, or pieces of it, will fall to Earth in March — somewhere – Technology & Science

Sometime in March, a streak of fire will cross the sky as the Chinese space Station Tiangong-1 falls out of orbit.

Recent analysis by the Aerospace Corporation in California concludes that it will fall to Earth in mid-March, give or take two weeks.

However, in March 2016, Chinese officials announced they were no longer tracking the station, its orbit would begin to decay and the station would burn as it falls to Earth.

Due to several unknown elements — such as Tiangong-1’s orientation as it orbited and even the density of the Earth’s atmosphere in a particular location — its difficult to say precisely where or when it will fall. 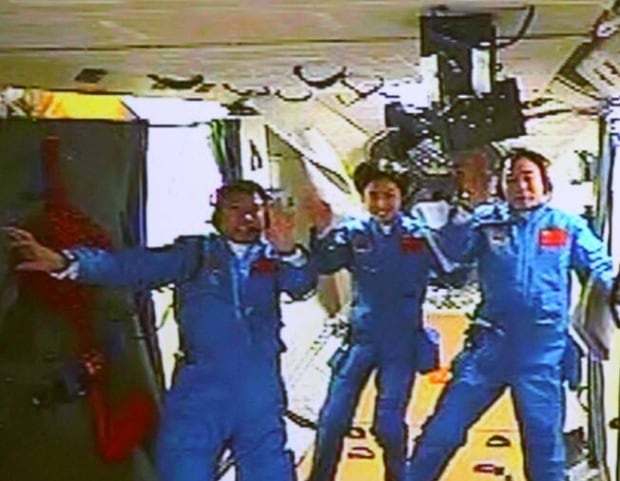 Chinese astronauts, from left, Liu Wang, Liu Yang and Jing Haipeng wave in the orbiting Tiangong-1 lab module in 2012. The space station, or pieces of it, will fall to Earth in March. (Associated Press/Beijing Aerospace Control Centre via Xinhua)

“Based on Tiangong-1’s inclination … we can confidently say that this object will re-enter somewhere between 43 degrees north and 43 degrees south latitudes,” the Aerospace Company recently said on its website.

The good news is that most of the station will burn up during re-entry. However, there is a chance that small debris may reach the ground.

“The date, time and geographic footprint of the re-entry can only be predicted with large uncertainties,” Holger Krag, head of European Space Agency’s Space Debris Office, said in November. “Even shortly before re-entry, only a very large time and geographical window can be estimated.”

But, as Earth is mostly water, there’s a good chance it will fall into an ocean, and the area in which it will fall will span a few hundred kilometres. There is almost zero probability that debris will fall over Canada.

While it may seem alarming that a metal object the size of a bus is going to fall to Earth, there is good news: in the history of space flight, no one has been killed by space debris.

And it’s not the first time a space station has fallen to Earth.

In 1979, the United States’ first space station, Skylab, fell to Earth. The 77-ton station also had a decaying orbit, mainly because NASA had focused so hard on getting it up, it didn’t come up with a plan to return it to Earth.

While in parts of the world there was concern over where it would fall, in the U.S. people actually threw “Skylab parties.”

On July 11, 1979, pieces both large and small — including part of an air tank — landed in Australia’s outback. 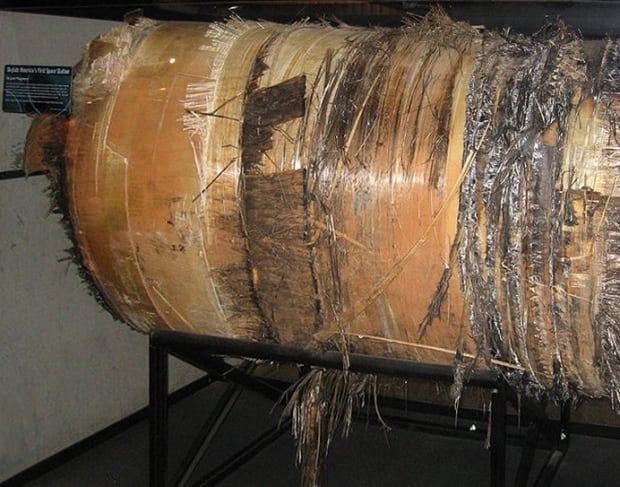 This fragment of an oxygen tank from Skylab landed in Australia in 1979. (Wikimedia Commons)

Though China has not confirmed it, Aerospace believes the re-entry of Tiangong-1 is uncontrolled.

In 2001, Russia’s Mir space station — a whopping 120 tons —made a controlled re-entry into the Pacific Ocean.

Though it’s rare, sometimes a piece of rocket debris is seen burning up in the atmosphere.

Last November a fireball streaked across Saskatchewan and Alberta. U.S. Strategic Command confirmed it was part of an Antares rocket returning to Earth.

iHerb – Grocery Sale: Up to 50% OFF +…
A Guide To Visiting Antigua, Guatemal…

The post Chinese space station, or pieces of it, will fall to Earth in March — somewhere – Technology & Science appeared first on JuiceeNews.

This post first appeared on DIGITAL MVMNT: Technology News & Product Reviews, please read the originial post: here
People also like
iHerb – Grocery Sale: Up to 50% OFF + Extra 5% discount
A Guide To Visiting Antigua, Guatemala: The Best 5 Things To Do And See

Chinese space station, or pieces of it, will fall to Earth in March — somewhere – Technology & Science