Acknowledging his push to broker peace in the Middle East has stalled, U.S. President Donald Trump on Tuesday appeared to threaten to cut off U.S. aid money to the Palestinian Authority, asking why the U.S. should make “any of these massive future payments” when the Palestinians are “no longer willing to talk peace.”

Trump, in a pair of tweets, said the U.S. pays “the Palestinians HUNDRED OF MILLIONS OF DOLLARS a year and get no appreciation or respect.”

“They don’t even want to negotiate a long overdue … peace treaty with Israel,” he wrote.

…peace treaty with Israel. We have taken Jerusalem, the toughest part of the negotiation, off the table, but Israel, for that, would have had to pay more. But with the Palestinians no longer willing to talk peace, why should we make any of these massive future payments to them?

Trump infuriated Palestinians and Muslims across the Middle East when he announced late last year that the U.S. would consider Jerusalem the capital of Israel and move its embassy there, upending decades of U.S. policy and igniting protests.

While the Palestinians haven’t closed the door to a potential deal with Israel, Palestinian leader Mahmoud Abbas said the announcement had destroyed Trump’s credibility as a Mideast peace broker, calling the decision “a declaration of withdrawal from the role it has played in the peace process.”

Tuesday’s tweets mark a tacit admission by Trump that his decision to move the U.S. embassy in Israel from Tel Aviv to Jerusalem has thrown a wrench into his administration’s plans to restart the peace process between Israelis and Palestinians, which he had dubbed “the ultimate deal.”

Trump tasked son-in-law Jared Kushner to restart the effort, and brought his former attorney, Jason Greenblatt, into the White House to lead the negotiations. Trump’s Mideast peace team had held meetings with Israeli, Palestinian and Arab leaders for nearly a year ahead of an expected peace proposal.

But by recognizing Israel’s claim to Jerusalem, Trump was seen by the Palestinians as siding with Israel on the most sensitive issue in the conflict. The Palestinians seek east Jerusalem — which Israel captured in 1967 — for their capital.

Trump said his decision merely recognized the reality that Jerusalem already serves as Israel’s capital and wasn’t meant to prejudge the final borders of the city.

In his tweets, Trump argued his decision had taken “Jerusalem, the toughest part of the negotiation, off the table, but Israel, for that, would have had to pay more.”

When Trump declared Jerusalem to be Israel’s capital, he insisted, counterintuitively, that the move would improve, not hurt, prospects for clinching a peace deal. 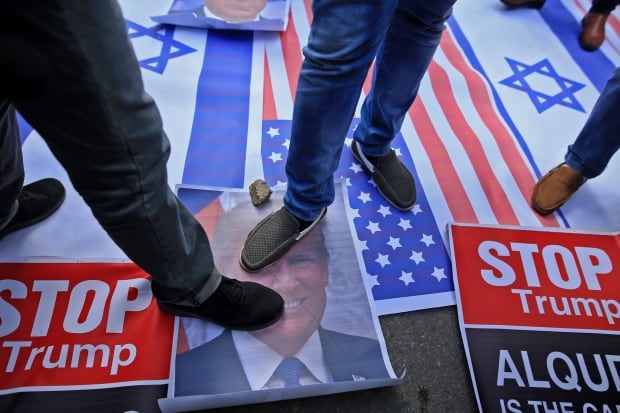 Palestinian protesters step on U.S. and Israeli flags and on a portrait of Trump on Dec. 7 after he said ‘it is time to officially recognize Jerusalem as the capital of Israel.’ (Mohammed Abed/AFP/Getty Images)

In the days after the decision, Trump administration officials said the strategy was based on the notion that Israel had lost faith in the U.S. as a committed partner during the Obama administration. With trust in Washington restored, Netanyahu’s government would be more inclined going forward to make tough concessions that would ultimately be needed for a peace deal, the U.S. officials argued at the time, and Israeli officials quietly indicated that they could potentially do so.

No one spelled out, however, what the Palestinians would receive in return.

Trump on Tuesday also issued a threat to cut off foreign aid dollars to an unspecified list of countries that don’t reciprocate. 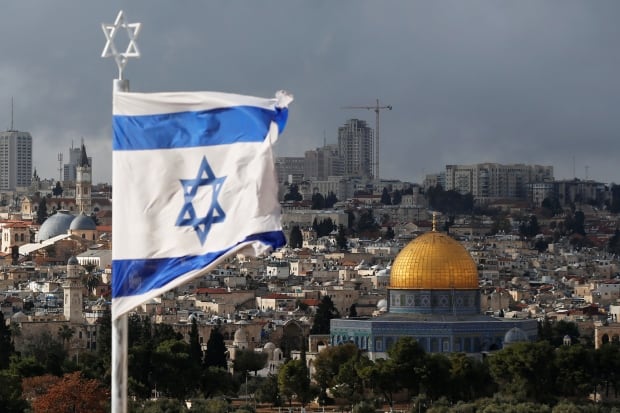 By recognizing Israel’s claim to Jerusalem, Trump was seen by the Palestinians as siding with Israel on the most sensitive issue in the conflict. (Reuters)

“It’s not only Pakistan that we pay billions of dollars to for nothing, but also many other countries, and others,” Trump wrote, appearing to reference a Jan. 1 tweet lambasting Pakistan for failing to do enough to combat terror groups while taking U.S. aid. “No more!” Trump had tweeted Monday.

Trump’s envoy to the United Nations, U.S. Ambassador Nikki Haley, foreshadowed Trump’s warning earlier Tuesday at the UN Security Council. Haley said the president doesn’t want to give more funds “until the Palestinians are willing to come back to the negotiation table.”

Since a Dec. 21 UN vote condemning Trump’s Jerusalem decision, U.S. officials have been weighing various options for retaliating against the Palestinians for pushing the resolution, which passed by a 128-9 margin.

Those options, which were to be discussed by Trump’s top national security aides at a meeting next week, included several involving cutting off some or all aid to the Palestinian Authority. Another option would cut funding to the UN agency that provides services to the Palestinians in places like Gaza, Jordan and Lebanon.

The talks are in their very early stages, with no determination yet of a fixed amount or percentage of assistance to be cut, according to officials familiar with the discussions.

However, the officials noted that only a relatively small amount of the more than $220 million that the U.S. was planning on sending to the Palestinians in the current budget year actually goes to the Palestinian Authority. Most of that assistance flows to non-governmental groups that are involved in building civic organizations that promote good governance, anti-corruption efforts, and health and education projects.

The officials said one possibility would be to redirect aid from the Palestinian Authority to those groups. Similar proposals were envisioned for the U.N. relief agency for Palestinians, the officials said, noting that Palestinian children in Gaza, Jordan and Lebanon would be disproportionally affected by an immediate and complete cut-off.

One basket of money that is unlikely to be affected is security assistance that helps the Palestinian Authority coordinate police cooperation with Israel, the officials said. They spoke on conditions of anonymity because they were not authorized to speak publicly about internal deliberations.​

how to control your thoughts - lovelc…
Jordanian Startup Eon Dental Raises $…
Review: ‘Trouble’ Scott Van Zen
Getting It Wrong, Making It Right: A …
Are there Differences between Real an…

This post first appeared on DIGITAL MVMNT: Technology News & Product Reviews, please read the originial post: here
People also like
how to control your thoughts - lovelcute
Jordanian Startup Eon Dental Raises $26M in Series B
Review: ‘Trouble’ Scott Van Zen
Getting It Wrong, Making It Right: A Call to White Helping Professionals
Are there Differences between Real and Online Blackjack?
The Important Details About An Eviction You Should Know More About
iPhone 13 mini — Should There Be One After the Fate of iPhone 12 mini?
How to “Reference Check” a Potential Employer
11 Ways to Use Content Marketing in Every Stage of the Sales Funnel