Daedalus, the Legendary Craftsman from Greek Mythology, has Two Warnings for Investors 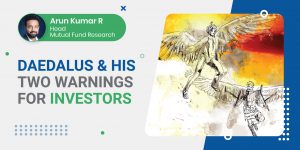 This article was originally published in LiveMint. Click here to read it. In Greek Mythology, master craftsman Daedalus and his son Icarus, were imprisoned on an island by King Minos. To escape, Daedalus created two sets of wings made of wax and feathers. As they planned their escape, he had two warnings for his son.  Warning 1: […]

Karen Wiesner: The Stories Behind Cla…
Hard Rock Sister Trio, The Warning, R…
Trigger Warning: A Chinese Father Sav…
Best Things to Do in Cadaques, Beauti…
8 Signs You Should Avoid That Potenti…

The post Daedalus, the Legendary Craftsman from Greek Mythology, has Two Warnings for Investors appeared first on Insights.

Daedalus, the Legendary Craftsman from Greek Mythology, has Two Warnings for Investors