nasdaq 100 technical analysis... what is happening?

"The fundamental picture has been mixed, so it's a little bit hard to look to that as the reason for what seems to be a solid rally," said Bruce McCain, chief investment strategist at Key Private Bank.

He also noted that Democratic nominee Hillary Clinton's lead in the polls over her GOP counterpart, Donald Trump, may be a contributing factor to the recent rally. "Not to make a statement on which candidate is better, but usually markets prefer for the incumbent party to retain the White House."

The three indexes also posted new intraday highs, as benchmark S&P 500 and the Nasdaq composite broke above previous intraday highs of 2,188.45 and 5,238.54, respectively, shortly after the open. The Dow Jones industrial average also posted a record high, rising past its previous high of 18,638.34. These previous records were all set last week, despite the indexes posting just slight weekly gains.

"It's a major vacation time between now and Labor day," said Ernie Cecilia, CIO at Bryn Mawr Trust. "The market right now is floating up on not a lot of news." "There's a lack of alternatives into other instruments," he said, noting that trading volume has been low recently.

Looking at the chart, we can see the Nasdaq has had about 10-11 red days in the last month and a half. That has to be almost a record, and we are starting to become a bit skeptical about actually how long that can last! Be that as it may, when you step back and look at the chart, the TREND IS YOUR FRIEND until the end in trading, and there is little much else to say that we are still in a solidified uptrend, and channel. Here is the chart. 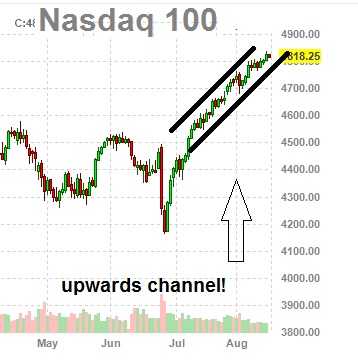 CLICK HERE - To Get Our Daily Charts & VIP Updates
On the earnings front, several firms, including Home Depot, Lowe's and Cisco Systems, are scheduled to report results this week.

I cover more and more technical analysis ==> HERE in our VIP members section.

WHAT IF YOU KNEW WHICH WAY THE MARKET WAS ABOUT TO MOVE BEFORE IT HAPPENED?  CLICK HERE To Join Our VIP ELITE GROUP  -- FREE!