GBP/USD. December 5. Results of the day. Pound will continue to grow under the influence of a single factor 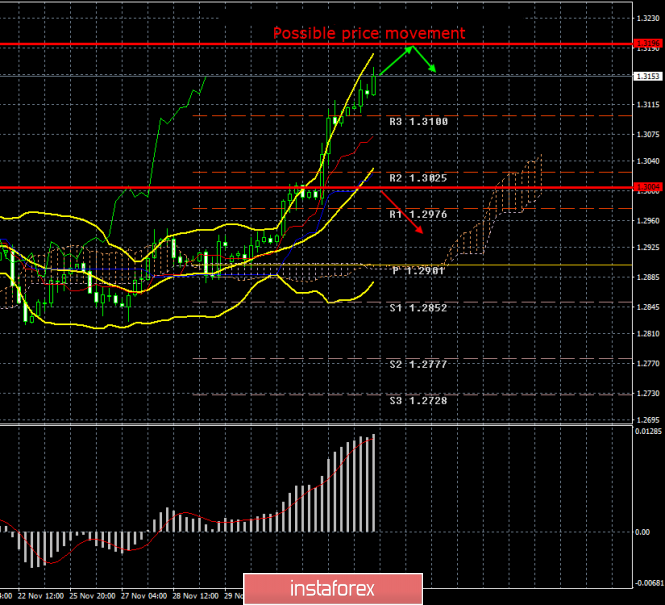 Average volatility over the past 5 days: 96p (average).

The GBP/USD currency pair continues its upward movement as if nothing had happened. Not a single important macroeconomic report was published either in the UK or in the US today, but this did not prevent Traders from continuing confident purchases of the British pound. What does this day? Firstly, that traders continue to completely ignore all macroeconomic information, and secondly, that the political factor for the pound/dollar pair is not just in the first place, it occupies the only place in the list of factors that affect the movement of the pair. Thus, only one conclusion can be drawn now: the pound is growing and can continue to grow only on the expectations of market participants that the Conservative Party will win the parliamentary elections and not just win, but win with the necessary number of deputy mandates, which will allow Boris Johnson to implement Brexit under an agreement with the European Union unhindered, which was reached literally “in the last 5 minutes” back in October.

Bikepacking - A Brief Introduction an…
Step-by-Step Guide on Creating the Ul…
How to Clean a Ninja Coffee Bar for a…
Meet RapidGator for Android, the Late…
The Happiness Cart – Falooda Express

Based on the conclusions made, we can assume that tomorrow’s macroeconomic statistics from the United States will either have no effect on the movement of the currency pair, or that it would but very restrained. The macroeconomic calendar for tomorrow is completely empty in the UK.

Thus, we can fully expect continued strengthening from the pound/dollar pair at the end of the trading week. About one week remains until the election date, the results will be known, most likely, on December 13th. Traders do not need to reduce long positions tomorrow, which is called “before the weekend.” Considering the fact that in the last two months, the pound sterling shows growth solely on the expectations of the Conservative victory in the elections, nothing prevents traders from continuing to buy the pair tomorrow. In such a situation, when in reality only one factor affects the currency, it is best to pay attention to technical indicators. All of them are currently pointing up. The Heiken Ashi Indicator (or MACD), for example, will show the willingness of traders to start a downward correction if they turn down and begin to color the bars in blue. The immediate goal, which we determined in the morning, based on the average volatility indicator for the last five days – 1.3196. The pair can even work today, or at least get close to it. A new goal will be obtained tomorrow, which is likely to be located at about $1.33 and will also be quite real to work out this week. After December 12, the future of the pound will depend entirely on the election results, so it makes no sense to guess where the pound could be for the New Year.

As for the likelihood that Conservatives will win the election, there is essentially nothing to talk about here, just look at the chart of the pound/dollar currency pair and everything becomes clear. If traders did not believe in victory, if rating and analytical agencies did not publish the results of opinion polls and social studies every day, which clearly indicate a 10-15% gap between the Conservatives and the Labour Party, then maybe the British currency would not grow on the eve of the elections. We can only once again warn traders that the political rating of Conservatives is now about 44-45%, which is far from necessarily converting to more than 50% of parliamentary seats. Of course, if Johnson’s party gains 48% of the 650 seats in Parliament, then the deal with Brexit can also be considered resolved, it will be possible to gather Conservatives to vote for the deal with the European Union, but the total number of MPs less than 300 can already create certain problems and tighten Brexit for a few more months or even years.

The technical picture is now unambiguous – all indicators are directed upwards. Thus, it is recommended to continue to remain in purchases until the Heiken Ashi (or MACD) indicator turns down. During tomorrow’s publication of macroeconomic reports in the United States, it is advised to be aware of open transactions, but we believe that there will not be a particularly strong reaction. And if the reports turn out to be weak, it can further push the pound to new heights.

GBP/USD continues to move up. Thus, since the pair managed to get out of the side channel, it is now recommended to trade for an increase while aiming for 1.3196. New targets for buying the British pound will be determined in the morning review tomorrow. It is not advised that you consider selling the pound at the moment, as we are witnessing an upward trend, and the pair is very far from the critical Kijun-sen line.

Explanation of the illustration:

Tenkan-sen is the red line.

Kijun-sen is the blue line.

Red line and bar graph with white bars in the indicator window.

*The market analysis posted here is meant to increase your awareness, but not to give instructions to make a trade.

Get a bonus from InstaForex

InstaForex analytical reviews will make you fully aware of market trends! Being an InstaForex client, you are provided with a large number of free services for efficient trading.

GBP/USD. December 5. Results of the day. Pound will continue to grow under the influence of a single factor