BSE Sensex and NSE Nifty charts (Aug 12, 2016): bulls and bears fight each other to a standstill

On a weekly closing basis, Sensex gained 74 points (0.26%) while Nifty lost 11 points (0.13%). With no immediate bullish triggers for the market, both indices are undergoing some consolidation.

In another worrying sign for the economy, CPI inflation rose to 6.07% in Jul '16 against 5.77% in Jun '16 - mainly due to rising prices of pulses, sugar and vegetables.

The daily bar Chart pattern of Sensex repeated the previous week's price pattern. It touched a slightly higher top of 28290 on Aug 9, formed a 'reversal day' bar (higher high, lower close), and corrected down to the support level of 27600.

A surge in buying by FIIs on Fri. Aug 12 led to an upward bounce. The index closed above its three EMAs in a Bull Market, but within the 'support-resistance zone' between 27600-28600 for the 5th week in a row.

Three of the daily technical indicators - ROC, RSI, Slow stochastic - are in neutral zones. MACD is falling below its signal line in bullish zone. However, all four are showing negative divergences by touching lower tops (marked by blue arrows) while Sensex has been touching higher tops.

Some more consolidation or correction is likely. With FIIs buying on every dip, the Sensex may not face a deep correction.

Stay invested, with a stop-loss. Do not try to short a bull market. Avoid big lump-sum bets on 'cheap' stocks. 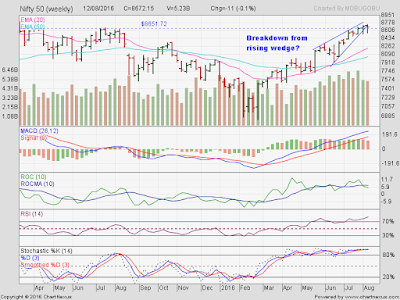 The weekly bar chart pattern of Nifty breached the 'rising wedge' pattern within which it was trading for the previous 11 weeks. But it was more of a sideways breach rather than a breakdown.

The index touched a new 52 week high of 8728, dropped below the wedge to a low of 8540, and then pulled back towards the wedge to close above the resistance level of 8650.

In the process, the index formed a 'reversal' bar (higher high, lower close). In candlestick parlance, a bearish 'hanging man' pattern has formed.

Weekly technical indicators MACD, RSI and Slow stochastic are well inside their respective overbought zones. But ROC has crossed below its 10 week MA and moving down. Is it a precursor to a correction?

Nifty's TTM P/E is still quite high at 23.71. The breadth indicator NSE TRIN (not shown) has fallen sharply towards its overbought zone.

The index is trading well above its two rising weekly EMAs in a bull market, and may continue to move higher on the back of FII buying. But technical signals are flashing red, so caution is advised.

Bottomline? Sensex and Nifty charts show that bulls and bears are fighting hard for dominance. Index valuations on a TTM basis are quite expensive, increasing downside risk. The 7th pay commission awards next month may trigger the next up move.

BSE Sensex and NSE Nifty charts (Aug 12, 2016): bulls and bears fight each other to a standstill