Wealthy Affiliate Scam or Not
Chatfuel Vs BotMyWork Chatbot Builder…
Can I Spy on A Cell Phone Without Ins…
GNU: A Heuristic for Bad Cryptography
6 Clever Ways To Start A Furniture Up…

During the week, the daily bar chart pattern of Sensex consolidated sideways while trading above its three daily EMAs in a bull market. However, bears put up a good fight at the 335 points downward 'gap' (formed on Feb 28) - continuing to frustrate efforts by bulls to push the index higher for the third straight week.

A foray inside the 'gap' Zone on Wed. Sep 16 could not be sustained despite buying by FIIs. On a weekly basis, the index closed flat. The hurdle of the 'gap' will need to be overcome before bulls can resume control of the chart.

US stock indices closed lower for the third straight week, as a tech-led sell-off intensified. If current restrictions on short selling are not extended beyond Sep 24, expect selling to intensify in Indian stock indices as well.

After 50% gains from its Mar '20 low, do not expect Sensex to surge much higher. Stocks like RIL, which has gained more than 100% since its Mar '20 low, HDFC twins, HUL fuelled the index rally.

Now midcap and smallcap stocks are coming to the forefront and several IPOs are in the pipeline. Small investors should be extra cautious not to fall into the trap of making easy money with little effort.

Wealth building in the stock market requires knowledge, discipline, patience and a lot of time for the magic of compounding to take effect. Quick profits are here today, gone tomorrow. 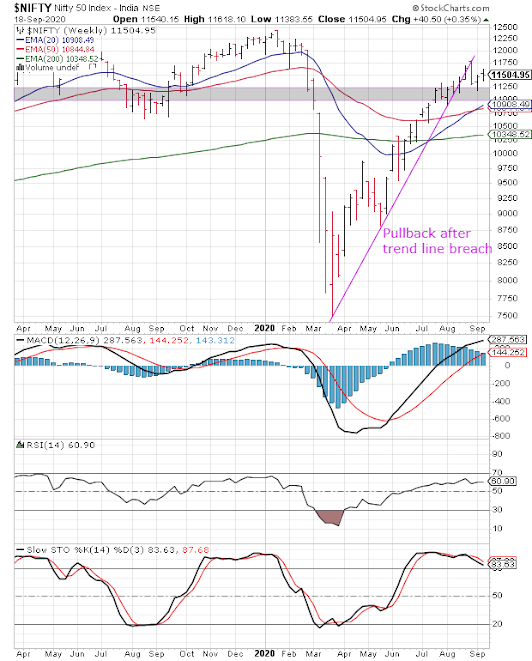 The weekly bar chart pattern of Nifty had bounced up after dropping inside the 'support-resistance zone' between 11000-11250 in the previous week. Despite FII buying, the index failed to make much upward progress - gaining about 40 points (0.35%) on a weekly closing basis.

Convincing breach of an up trend line is often a sign of trend reversal. But bears are still on the back foot, since all three weekly EMAs are moving up and the index is trading above them in long-term bull territory.

After touching a new high of 33.03 on Tue. Sep 15, Nifty's TTM P/E has moved down a bit to 32.98, which is well above its long-term average and deep inside its overbought zone. The breadth indicator NSE TRIN (not shown) has dropped sharply from its oversold zone. Some more near-term index consolidation or correction is possible.

Bottomline? After breaching 5 months long up trend lines on Sensex and Nifty charts, both indices have been consolidating near resistance zones. Some more consolidation or correction is likely. Stay on the sidelines. Wait for better entry opportunities.
Subhankar (http://investmentsfordummieslikeme.blogspot.com)