In Your House: Good Friends, Better E…
Achyuth Reddy – Setting A Sustainable…
Woodlands Caravan Park
Cat Coronavirus Diary – Day 10
Can You be Too Old for Entrepreneursh…
During Jul. '20, FIIs were net buyers of equity worth Rs 24.9 Billion - thanks to their strong buying during the week of Jul. 20-24. It was their third straight month of net buying. DIIs were net sellers of equity worth Rs 100.08 Billion during Jul. '20. It was their heaviest monthly selling since Mar. '19.
The index of eight core sector industries contracted 15% in Jun '20, compared with 22% in May '20 and 37% in Apr '20. During Q1 (Apr-Jun '20), the index contracted 24.6%. Only fertilisers showed 4% growth. The other seven (coal, crude oil, natural gas, refinery products, steel, cement, electricity) contracted between 6 to 34%.
Gross tax revenue shortfall of 32.6% during Q1 (Apr-Jun '20) widened India's fiscal deficit to Rs 6.62 Trillion, which is 83.2% of the Rs 7.96 Trillion budget estimate for FY 2020-21. This is the highest fiscal deficit in percentage terms since Q1 (Apr-Jun 1998)
BSE Sensex index chart pattern

An interesting tussle between bulls and bears is evident on the daily bar chart pattern of Sensex. Despite buying pressure from FIIs, bears continued their last-ditch resistance at the 640 points downward 'gap' formed back on Mar 6th.
On Tue. Jul. 28, the index closed above the 'gap' zone. However, formation of a 'reversal day' bar (higher high, lower close) on Wed. Jul. 29 provided a psychological boost to bears. The index corrected during the rest of the week, and closed just below the 'gap'.
What next? Technically, the balance remains tilted towards bulls. The index is trading above its three daily EMAs in bull territory. The up trend line - drawn through Mar '20 and May '20 lows - remains intact. The 50 day EMA is poised to cross above the 200 day EMA - the 'golden cross' will technically confirm a return to a bull market.
Bears are not out of the game yet. As per 'gap' theory, part or complete filling of a 'gap' is usually followed by a resumption of the trend prior to formation of the 'gap'. That means the down trend that started from Wed. Jul. 29 can continue.
On the downside, the wide range between 35700 (level of 50 day EMA) and 37200 (level of 20 day EMA) can provide good support. However, a convincing breach of the up trend line (at 36500) will confirm a trend reversal.
Daily technical indicators are in bullish zones, but starting to show downward momentum. MACD is moving sideways but has slipped below its signal line. ROC has crossed below its 10 day MA. RSI and Slow stochastic have dropped down from their respective overbought zones.
There is no rush to buy the dip. It is possible that the index will test support from the up trend line. Add if the index bounces up from trend line support. Book profits if the trend line gets breached.
NSE Nifty index chart pattern 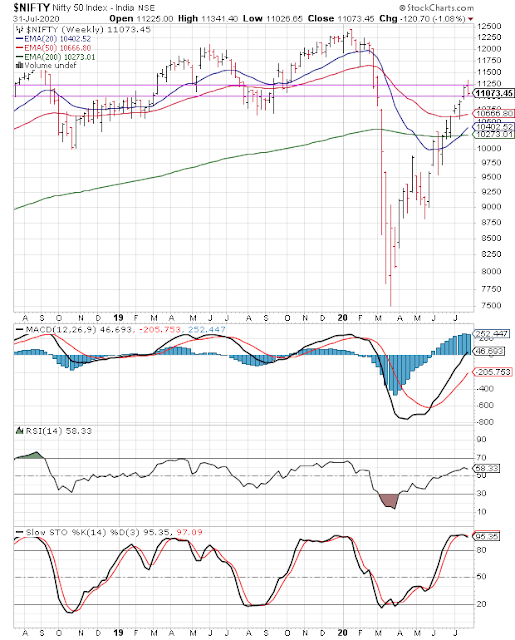 The weekly bar chart pattern of Nifty closed above its three weekly EMAs for the fourth straight week, but formed a weekly 'reversal' bar (higher high, lower close) that stalled the upward momentum of the rally from its Mar '20 low.
The index moved above the 'support-resistance' zone between 11000-11250 intra-week, but failed to sustain above 11250. Bear resistance forced a second weekly close inside the 'support-resistance' zone.
The 20 week EMA has crossed above the 200 week EMA after forming a bullish 'rounding bottom' pattern. The 50 week EMA is in the process of forming a 'rounding bottom' pattern. So, bulls have no reason to panic just yet. However, a test of support from the 200 week EMA (at 10273) may be on the cards.
Weekly technical indicators are in bullish zones. MACD is rising above its signal line and has entered bullish zone. RSI is above its 50% level. Slow stochastic is well inside its overbought zone.
Nifty's TTM P/E has moved up to 30.2, a new lifetime high and deep inside its overbought zone. The breadth indicator NSE TRIN (not shown) is in neutral zone, hinting at more consolidation or correction.
Bottomline? Counter-Trend rallies on Sensex and Nifty charts have expectedly stalled at resistance zones after re-entering bull territories. The current dip may not be a buying opportunity. Sometimes, staying on the sidelines can be a good strategy.
Subhankar (http://investmentsfordummieslikeme.blogspot.com)