FIIs returned with renewed buying vigour after Monday's holiday. On Tue. Sep 6, their net buying in equities touched Rs 1440 Crores, while DIIs were net sellers of equity worth only Rs 270 Crores, as per provisional figures.

The Nikkei India Services PMI, which tracks monthly changes in activity in services sector companies, rose to 54.7 in Aug '16 - up from 51.9 in Jul '16 - its 14th straight month of expansion and highest level in 42 months. New business was the main driver of activity growth. 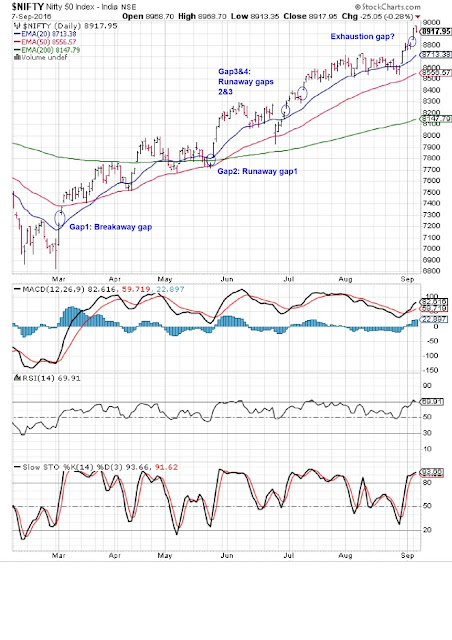 Since touching its Feb 29 low that marked the end of a year-long bear phase, the daily bar Chart pattern of Nifty has formed several 'gaps', starting with the
'breakaway gap' (marked by blue circle as Gap1 on the lower left of chart).

'Runaway gap4' occurred on Aug 30 but has not been marked on the chart for two reasons: (a) to avoid cluttering up the chart; (b) because it is technically less significant because it has formed within a consolidation zone.

A few other 'gaps' (upward and downward) had also formed on the chart - but have been ignored because they have been filled either partly or completely, and hence are technically less significant.

A 'runaway gap' has measuring implications, and hence is also called a 'measuring gap'. It usually occurs at the mid-point of a price move (up or down).

Here, we have a situation - not unique, but unusual - of three such 'runaway gaps'. Unfortunately, there are no measuring 'rules' for such unusual occurrences.

So, we need to use our common sense and chart position of the 'gaps' to arrive at a suitable mid-point of the bull rally. Using approximations instead of exact calculations (because a price chart doesn't move according to arithmetic or logic), we arrive at the following figures:

This target has already been exceeded. In one of those strange coincidences that keep happening on price charts and make technical analysis fun, 8850 also happens to be a long-term 'support-resistance' level (refer last week's post).

Now we come to the most crucial 24 points 'gap' formed on Tue. Sep 6. The reasons for considering it as an 'exhaustion gap' that signals the end of a price move are two fold: (a) it has formed just below our price target of 8850 before moving higher by 100 points; and (b) it has been followed by a 'reversal day' bar (higher high, lower close) that often signals the end of an intermediate up move.

So, should you sell all your stocks first thing tomorrow and move to cash? That will be akin to timing the market, and is not recommended.

Whether yesterday's 'gap' is an 'exhaustion gap' or not will be technically confirmed when it gets filled. That should happen within the next three or four trading sessions. Even after that, there is no reason to believe that the bull market is over even before it has started properly.

What is likely to happen is either a decent (5-10%) correction - which will provide the adding opportunity for all those who missed the rally of the past 6 months - or a period of consolidation, following which the next leg of the up move should resume.

Daily technical indicators are looking overbought. Breadth indicator NSE TRIN (not shown) is falling deeper inside its overbought zone. Nifty TTM P/E is well above its long-term average at 24.45. All these are technical signals suggesting a correction.

No need to panic. Part-profit booking - particularly in mid-caps and small-caps that are trading at very high valuations - can release some cash for investing at lower levels. Alternatively, stay invested with a trailing stop-loss.