It's advisable to clean your Computer internal hardware of dust, particles, and other materials that may be present inside it's case. I found this out, after my mother's desktop computer (2 years new or old) was running a bit slow, and intermittently switching itself off. We had done all the common computer system cleaning procedures, by applying Anti virus, spyware (e.g. Avast, Malwarebytes, HiJack This, What's Running (background activity) Adware, etc. Also applied diagnostic hard drive clean up targeted methods and trouble shooting windows PC errors - altering and running mscongfig - startup, services, ccleaner, defrag: defraggler, uninstalling unwanted programs, check disc, system restore, and more. 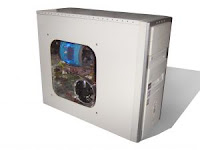 But still the computer's issues existed, after running numerous software and comprehensive diagnostics. But I never really though about to clean the computer's interior hardware until a while later. I think many people, understandably think a system process, and spyware, adware, etc, is the cause, and like me jump in an attempt to find and fix it. But if standard trouble shooting, produces no noticeable result or improvement - then the hardware is generally considered suspect. There are also hardware diagnostic/information freeware that can help target specific issues. (e.g. Fresh Diagnose, PC diagnostics Freeware 1.0.0.8, PC Wizard, S/W System Information, etc). Image of pc by marinm at SXC.

Computer Location - Dust Absence
Even though I clean my PC's internals about every 3 to 4 months, hence I suspected a dirty computer - simple. Thus I dismantled the computer case, and man what a dirty dusty mess inside. The PC system must have been struggling (i.e. dust interference with electrical circuitry?), overheating slightly, surely affecting it's performance. But I think it's unsuitable environment must have contributed, because the hard drive lives in a boxed up corner on thick carpet, adjacent to two windows of thick curtains, and next to a bed with a thick bedspread. Also I think trees large outside, may have contributed, with it's pollen grains (evidence on the adjacent outside balcony). Hence an unnoticeable dusty surroundings, without any air circulation. So a simple, but cautious cleaning operation was undertaken, to expel the trappings of dust and other particles, within the computer. 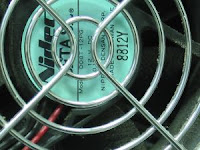 This was removed and carefully cleaned and dried, with a moist cloth, a fine artist brush, and blowing by mouth. Ideally a can of compressed air would be quicker, and of course after the computer's power is turned off. Pays to separate the screws for the entire case, power fan, and it's shroud, as I got them a bit mixed up. I considered testing the fan's efficiency (flow rate?) or somehow for voltage or current input. But it spun fast enough, so OK by me. Image of PC Power fan By veredgf at SXC.

This was carefully cleaned, and in fact layers of clumpy dust/particles were picked and brushed off, and blown out, and also within the hard drive enclosure, memory, modem, and within the front panel. I believe a anti-static strap should be used, but I have never used one, in about 10 years. I also used a mini USB vacuum cleaner, which helped a little. I also carefully slanted and shook the case sideways and foward- backward. Image of pc innards by saejinn at SXC.

For my PC I clean the case vent holes externally every few weeks, but this PC had to be washed and dried around the vent holes from the inside. Application of paper tissues/wipes, cotton swabs (for PC's), rubbing alcohol (or similar) could be used on the computer case vents - but make sure they are dry before re-attaching. There was grime and dust cluttering the vent holes. So don't know if the computer was breathing properly, but should breath better after a thorough clean. 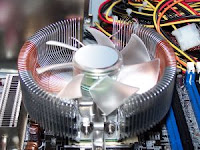 Carefully cleaned the CPU and it's surroundings, as it's important for it too stay cool to allow the computer system to function properly. Their are utilities to monitor CPU functions, including temperature (e.g. Core Temp: www.alcpu.com/CoreTemp/). Your PC system or driver disc may have a such a utility, which you may want to use for monitoring. Image of CPU heat Sink By thefork at SXC. 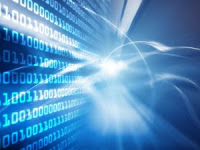 After cleaning we found the computer went noticeably faster, without switching off. But we felt it should be faster still. Extra ram, and a new CPU (my Mother's idea, and I did not know until later) were installed, certainly increased the computer speed, and now all working good - at speed. But I don't know, or can easily figure out, if having a dirty computer over 2 years, may have had a detrimental effect on the hardware components, thus causing for components to be replaced for increased performance. At this stage, some may want to run their anti virus, spyware, defrag, and cleaning programs to round off a computer's hardware cleaning. But to clean your computer, is generally straight foward, and if implemented with care, and on a regular basis, can reduce a loss in performance. Image of Digital Dreams By flaivoloka at SXC.