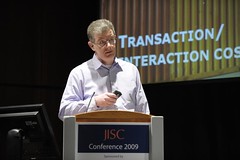 OCLC announced in January that Lorcan Dempsey was retiring at the end of April. For me, it has seemed like Lorcan had worked at OCLC forever, but that was not true. However, I've seen his impact on OCLC research and have been thrilled to use some of his work, especially Collection Directions: Some Reflections on the Future of Library Collections and Collecting which he wrote with Constance Malpas and Brian Lavoie. And I am thankful for Lorcan's willingness to share his work.

Last year, Lorcan was asked if he "could talk about what  [he] valued or found essential for a library student to know." He turned that request into a long, well-written, and meaningful blog post, Advice to an LIS graduate student: reflecting life and career. Yes, the post contains advice as well as stories from his life and career.

I very much appreciate Lorcan's honesty about attending college and his early work and life. He wrote:

I was a college dropout. For several years, I worked in temporary jobs, or, well, sometimes, I did not. This included a spell of over eight months working on a production line in Continental Gummiwerke in Korbach, Germany, as one of a group of Irish gastarbeiters [guest workers].

I think many of us have taken winding routes to this profession, including barriers that we dug under, jumped over, or ran around. Thank you, Lorcan, for putting yours in writing!

Yes, this piece is full of advice, although some of it is tucked in what he says about himself. For example:

I have learned to try never to take anything for granted, and I understand only too well from experience that I do not always have perfect or even very good judgement or intuition. I understand that my background affects how I behave or how I think and importantly how I can seem to others. I always have more to learn, whatever the situation, and it is dangerous to rush to quick judgement.

Learning doesn't stop when you finish a degree. Learning must continue! It happens as part of life, but it also must happen intentionally.

I encourage you to pour a cup of coffee or tea and read what Lorcan has written, even if you are already established in your career. I think you'll still find it useful. And do give it to current students, as well as recent graduates. This was written for them and they should read this advice by someone whose has impacted their work, even if they don't know it.