#NYLA2020 Wrap-up: The joy of an online conference during a pandemic 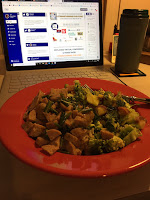 Like many other conferences, the 2020 New York Library Association Annual Conference went virtual with broadcasted sessions on Nov. 5-6, and access to prerecorded content for weeks afterwards. This was a very different experience. There were no group lunches or dinners. No alumni events. No running into colleagues in the hallway. Instead we were each in front of our own computers as we attended the live sessions. That spot became where we had breakfast, mid-morning coffee, lunch, and snacks. For some, it was where they exercised while watching sessions!  So what stood out?

Next year (2021) the Nyla Annual Conference is scheduled to be in Syracuse on Nov. 3-6.  Every 2021 conference is looking at their options and wondering if they will be able to hold their events in person. In addition, every 2020 virtual conferences is realizing that participants saw a benefit in having an online conference and likely want some virtual components to continue.

Why go to an on-site conference?

I'm sure there are other reasons, but that is what comes to mind right now.

I do want to say that I missed driving to Saratoga Springs, where the conference was supposed to be held. And I missed my favorite food places in Saratoga (Hattie's), as well as the independent bookstore. The MSLIS programs in NYS have alumni events at the conference, and I missed those too.

Whatever form NYLA 2021 takes, I am looking forward to it. My hope is that it will be on-site (at least part of it).  If so, my plan is to create a food map for participants to use!  Maybe some dine-arounds? We'll see!

#NYLA2020 Wrap-up: The joy of an online conference during a pandemic