YouTube pranks - something that everyone loves to watch and laugh at because they're so real and so innoce- nope, they're the worst thing in YouTube next to the cringey vine/youtube/twitter/musical.ly kids and the #dontjudgeme challenge compilations. The pranksters themselves are absolute idiots, making pranks (or should I call them ''social experiments'' now?) seem innocent while they should be put in prison for doing those innocent ''Isis bombing social experiment (Gone sexual)(Gone wrong)(In the hood)", "Raping social experiment (Gone wrong)", "Killing best friend prank" (The last one is an actual title, surprisingly. Not really tho) So here are the 3 biggest problems with the pranks:
1. Clickbait titles and thumbnails. Most of the prank videos now have at least one of these in the title: (GONE WRONG)/(GONE SEXUAL)/(IN THE HOOD). Of course, making people click it, wanting to find out what happened that it went wrong or sexual. The thumbnails also contain some clickbait elements, usually having red circles and red arrows in them or simply having some moment from the video that attracts attention. First - all I did was write 'pranks' in the search, this is what came up:

Yup.. so I clicked search when I put in 'pranks' and thisis what came up: 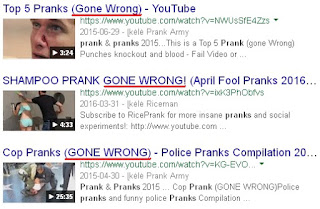 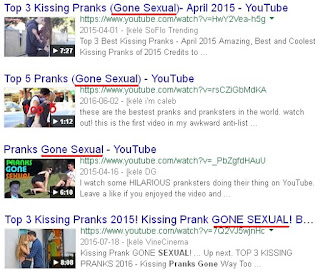 And welp, every each one of them has clickbait both in the title and in the thumbnail. Nice. This is what YouTube has come to, clickbait titles and fake pranks. Speaking of which..

2. The amount of faked pranks. (Tbh, with how the pranks have been going lately, it's actually nice knowing that practically every prank is faked) No matter what kind of prank it is, "Isis bomb prank" or "Talking car prank", practically every single prank on YouTube has been faked in one way or another, which would mean either actors being hired for reactions or simply asking random people to come and act surprised. Many YouTubers have been exposed for fake pranks but not many have come clear saying that they did so, but rather denying it even thought the people exposing them have shitloads of evidence. One of the best YouTube prank exposers is this guy:

I think he deserves WAY more subscribers than he has now. He has exposed so many pranksters, some of the biggest ones too, I recommend checking his channel out, it's some next level detective shit.

3. The idiots that run the channels and the content they produce. Personal opinion: Most of them look like psychos that would murder you if they got the chance or instead set you on fire and watch you slowly dying and decaying. I don't even know what goes trough their heads when they make those pranks, do they just sit in their secret Prankster hideout and be like: ''Yo dude, I'mma create a vid terrorizing people and make loads of money, you in fam?" I actually wouldn't be surprised if that was how things worked in the pranking community. Also, most of the pranksters are usually inconsiderate about the pranks they make and what recently happened.

That title alone is the worst thing. *Try not to laugh at people being scared shitless because they think that someone threw a fucking bomb at them*. That's not at all funny, some people could seriously have a heart attack or something.


And of course they made someone dress up as a muslim since every single muslim is a terrorist... not... These bombing/shooting pranks should be stopped and the pranksters behind them should be arrested and put into prison for at least 4 years. You're probably thinking: ''But dude, you said practically every prank is faked, then these are probably too.", you see, the fact that it might be fake doesn't make it better in any way since they're putting out a negative message and muslims already get a lot of hate because of what some did (which I still don't get, if some do it, doesn't matter the whole race does it. We've seen white people shooting in theathers/schools, so why don't we get as much hate as they do?), so making this video would make it even worse.

(NOTE: At this point, I noticed that all of the screenshots of YouTube in this post are in a language most of you might not understand. Sorry about that, but the titles are still the same and so are the channel names, so it's not really the worst)

In conclusion: practically every prank video is faked, has clickbait in the title and thumbnail and usually produced by some inconsiderate twats. I believe that the pranks will settle down due to the fact that legal action has been taken recently because some pranksters made a video about art gallery heisting which had so many people in terror because some dude came into the art gallery with guns and I think what seem to be female socks on their heads, told everyone to be still, took some paintings and ran out while an alarm was going off. So hopefully the bad prank decade has ended..