How to Watch UFC 202 Online With Cheap PPV

The Notorious One is back and he is all set to take out his revenge against Nate Diaz at UFC 202. Conor McGregor’s invincible record was broken by Diaz at UFC 196 after a shock defeat. Since then, McGregor has been itching to get his hands on Nate Diaz. On August 20th 2016, we will witness this epic showdown between Nate Diaz and Conor McGregor at the T-Mobile Arena, Las Vegas.

There are many ways through which you can watch UFC 202 online. But when you look for the easiest and wallet friendly methods to live stream UFC, nothing comes close to purchasing the event on pay-per-view (PPV). That said, PPV has different prices all around the world; meaning it will be expensive in some regions while being cheap in others.

This is where our guide comes into play. We will show you how to get pay-per-view at affordable prices and the best locations to purchase the PPV from.

The price of UFC 202 PPV varies from region to region. To find out the most suitable location from where you can get pay-per-view at the lowest possible price, we conducted a small research. We switched our virtual location using a VPN; connected to different servers located in different regions, and collected data about PPV prices.

After finding various prices for Ufc Ppv, we converted these prices into USD. The results showed that in Philippines you get the lowest PPV price to watch UFC 202 online. Here are the results from other countries and the VPN services that we used:

*Note: These prices may vary due to current currency exchange rate as they were converted to USD as of August 16th 2016.

Our research revealed that Philippines is the best location you can use to get cheap PPV for UFC 202. The price difference of PPV among different regions is considerable. But with Philippines, you get the lowest price possible.

The original price (or the price in USA) of UFC PPV is $59.99. We observed this price when were not to a VPN service: 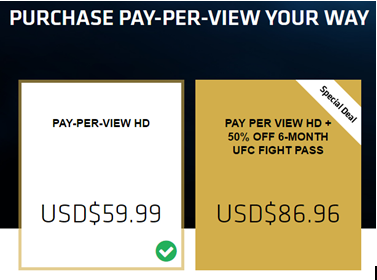 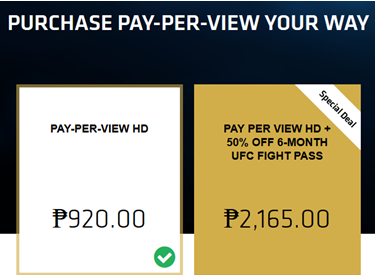 How to Bypass UFC Pay-Per-View Blackouts

Now what if UFC pay-per-view is blacked out in your region? There are different countries such as UK, Germany, Brazil, and France where you can’t access UFC pay-per-view. This is because in these regions the fight is being broadcasted on local television channels. Therefore, if you are located in a country where PPV is blacked out, you won’t be able to watch UFC 202 online and will be shown the following message:

To overcome this problem and bypass UFC PPV blackouts, you should use a VPN service. By connecting to a server where UFC PPV is available, you will be able to overcome these restrictions and purchase the pay-per-view.

On a side note, there are many UFC fans that are looking for ways to watch the event on Kodi. To help you out, we have compiled a list of add-ons that will help you watch UFC 202 on Kodi:

Within each of these add-ons are different channels. Once you have added these add-ons to Kodi, you can watch UFC 202 online. However, some of these channels are geo-restricted and will only work if you are located in the prescribed locations. But if you have a Kodi VPN by your side, you can easily bypass geo-restrictions and watch UFC 202 on Kodi.

The build up to UFC 202 is intense and could cause major pandemonium throughout UFC. The rematch between Nate Diaz and Conor McGregor has all the makings for one of the best UFC fights as both the fighters are eager to get their hands on each other.

Nate Diaz will be looking to prove that his victory at UFC 196 wasn’t a fluke, while Conor McGregor wants to get his revenge against Diaz and undo his shock defeat. This could very well be the highest selling UFC pay-per-view to date but we’ll have to wait and see.

You can watch UFC 202 online by purchasing PPV at cheap prices and avail major savings (almost more than 60 percent). Just change your IP to Philippines using a VPN and enjoy the thrilling showdown between McGregor vs. Diaz.

Don’t forget to check out this awesome extended preview of UFC 202:

Full list of winners from the 2017 MTV Video Music Awards

How to Watch UFC 202 Online With Cheap PPV