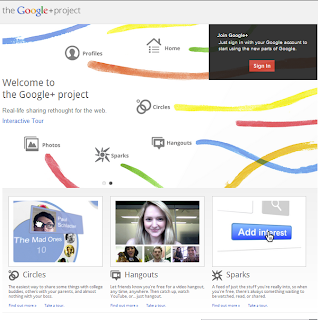 This week, I finally managed to get on to Google+ (A special shoutout to my friend, Reevi Rajan for the invite!) It took a while to get there, thanks to Google's night-club-velvet-rope approach. (No, I didn't receive a special early bird invite. Guess I'm not important enough. Sigh!)

I’d already read a lot about Google+’s features, so I somewhat knew what to expect. And I immediately started putting my friends, acquaintances and people I follow on Twitter, into circles (earlier, I just put them in boxes – so the change is merely geometrical, so to speak.)
I haven’t tried out all the features yet (I'm yet to play around with Hangouts and Huddle for lack of enough friends who’ve made the move to Google+) so I won’t wax eloquent on all its features or crystal-gaze into its future since I’m no ‘expert.’ But I will say that I am glad that there is a social network that recognizes that ‘friends’ cannot be clubbed together under one homogenous label. There were times when I held back from saying something too personal because apart from my close friends, a lot of acquaintances and people I know professionally, would be reading it. There were also times when I shared links or other information that I felt would be completely irrelevant to some of my ‘friends.’
A good friend of mine had even started a second Facebook account, which she hoped would allow her to be herself with a select group of close friends since her other account had more acquaintances than friends. So I’m thrilled that Google+ makes it so easy to arrange people into friends, acquaintances and other people whom I may not know personally - such as folks I follow on Twitter -- but whose posts I would like to ‘follow.’ I also love the fact that Google+ allows you to edit comments or posts. I hate typos and ended up deleting and reposting on Facebook quite a few times. I’m hoping that Google+ gains enough traction; it's still quite lonely out there and the network's success hinges on how many people will be willing to make the switch from Facebook.
Jay Baer made an interesting point in his blog post ‘Why Google Has The Hammer To Make Businesses Use Google Plus.’ Because Google mainly controls search and also has a whole range of other products under its wing, the ability to offer an integrated experience is what makes Google a powerful player. (I love how I can integrate Picasa with my Google+ profiles so easily  uploading lots of pictures to Facebook is usually a painful process.) Once Google starts incorporating Google+ in search results, businesses will have to start using it to stay ahead of the SEO game.

A big question on my mind though is if Google+ becomes popular with businesses and people alike, what happens then to the time and effort spent in building engagement and ‘likes’ on Facebook business pages? It really would be undoing a lot of work to start all over again on Google+. Any answers?

If you're looking for information on Google+, here are a few great posts I read this week:

1. 8 Quick Thoughts on Google Plus by Sree Sreenivasan, DNAInfo
2. I Really Wanted To Hate Google Plus by David Meerman Scott
3. Will Google Plus Let Me Hang Out With Halle Berry by Baratunde Thurston
4. Why Google Has The Hammer To Make Businesses Use Google Plus by Jay Baer
5. It Pays to Wait by Kellye Crane
6. Nine Reasons to Switch From Facebook To Google Plus by Mark Sullivan, PC World (via @sabera)
7. Google+ is Facebook's Number One Challenger, and LinkedIn Better Watch Out Too by Paul Sawers, The Next Web (via @sree)

Have you tried out Google+ yet? I'd love to know your thoughts.