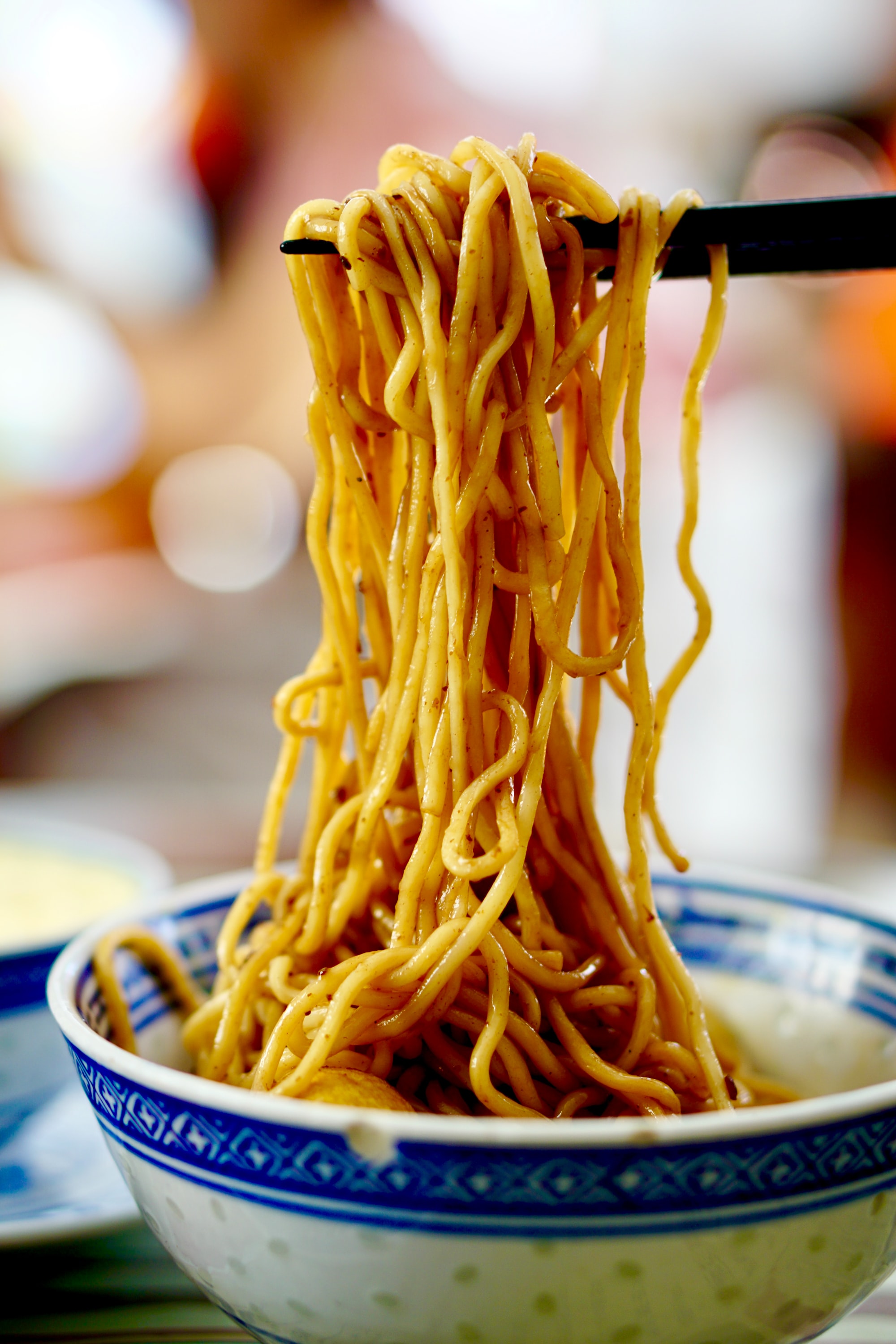 In The Grasshopper: Games, Life, Utopia, Bernard Suits defines a game as “a voluntary attempt to overcome unnecessary obstacles.” We know people love to play games, but people's lives are already full of hard work and obstacles. Who wants more?

One explanation is self-determination theory (SDT), which is a fancy term that says we choose to do things to fulfill our basic psychological needs for autonomy, competence, and relatedness. For games, competence is key. People play games for many reasons, but perhaps most important is that we like experiencing the rush of self-improvement.

If your job is boring and doesn’t provide any avenue for self-improvement, then games can give you what you’re looking for. One important thing though: delivering a feeling of competence is hard because as players improve, they need greater and greater challenges in order to stay engaged.

If you’ve studied game design, you’ve probably come across the concept already: it’s called “flow”. When you're experiencing flow, things feel “just right”. They're difficult enough to keep you interested, but not so difficult that you feel like it's impossible. If you're playing tennis against Roger Federer you're (probably) just going to get stomped. If you’re playing against a four-year-old, you're going to beat them too easily. Neither is very engaging.

So games need to increase in difficulty over time or people will get bored as they improve in Skill. But if they get too hard too quickly, players will also get frustrated and quit. Our goal is to keep players happy between those two states, so they can experience flow while continuing to improve (and fulfill their psychological need for competence).

“So just make difficulty increase over time, problem solved!” you might say. That’s a nice idea, but there are two problems:

First, skill does improve over time, but not linearly or predictably - people plateau, regress, and jump in skill level as they play. If you hit a plateau, one of two bad things can happen: Either you lose interest because you’re no longer improving, or the game’s difficulty keeps on increasing, and you start getting demolished. Sometimes both! 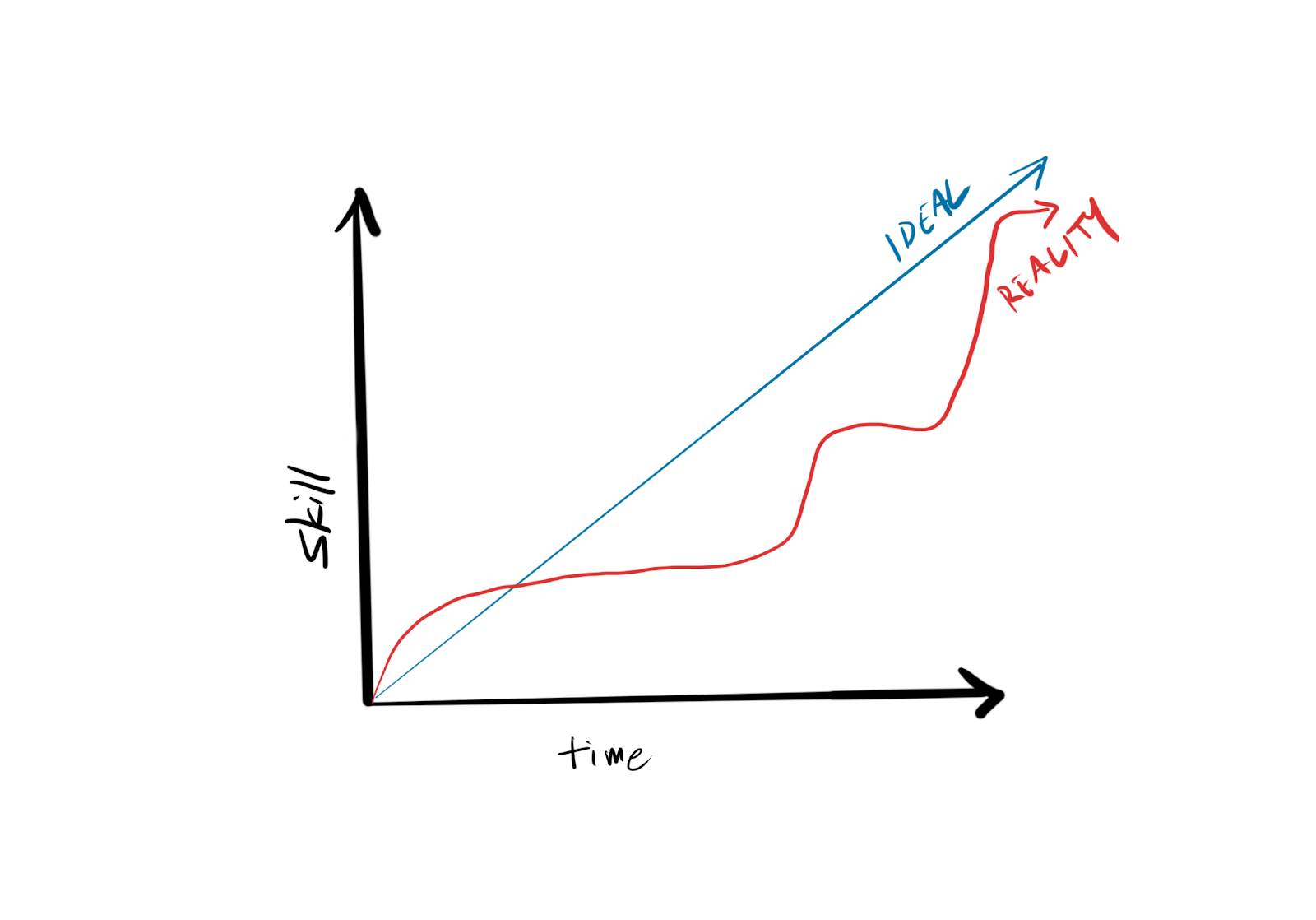 Second, we need to design games for people with a wide range of skills and rates of improvement. If we just have a set difficulty for everyone some people are going to find it too hard while others find it too easy; again preventing us from delivering that sweet, sweet feeling of self-improvement. This is why many games have difficulty settings that players can opt into – but how can you hope to cover all the possible players out there with only a few different settings? 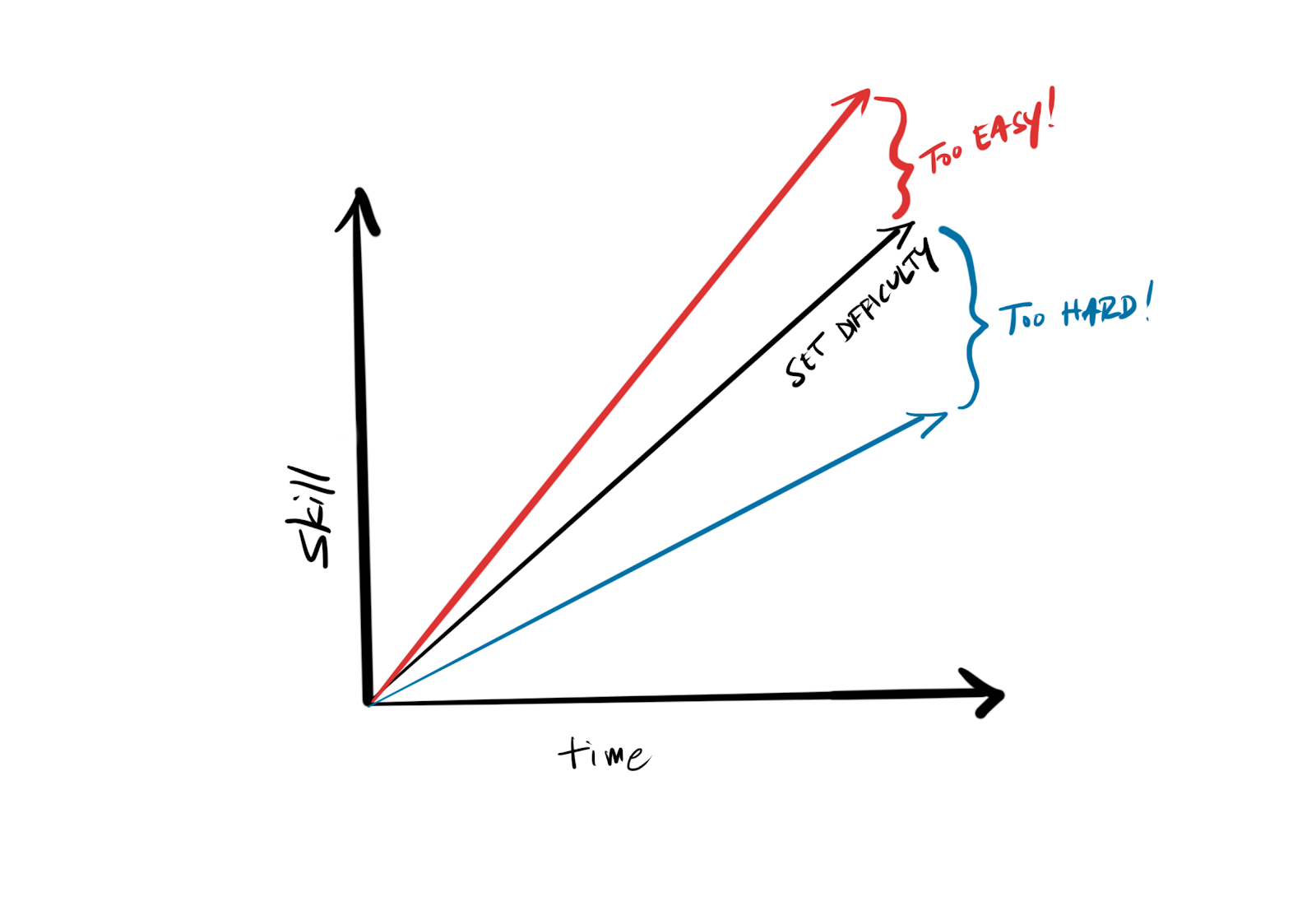 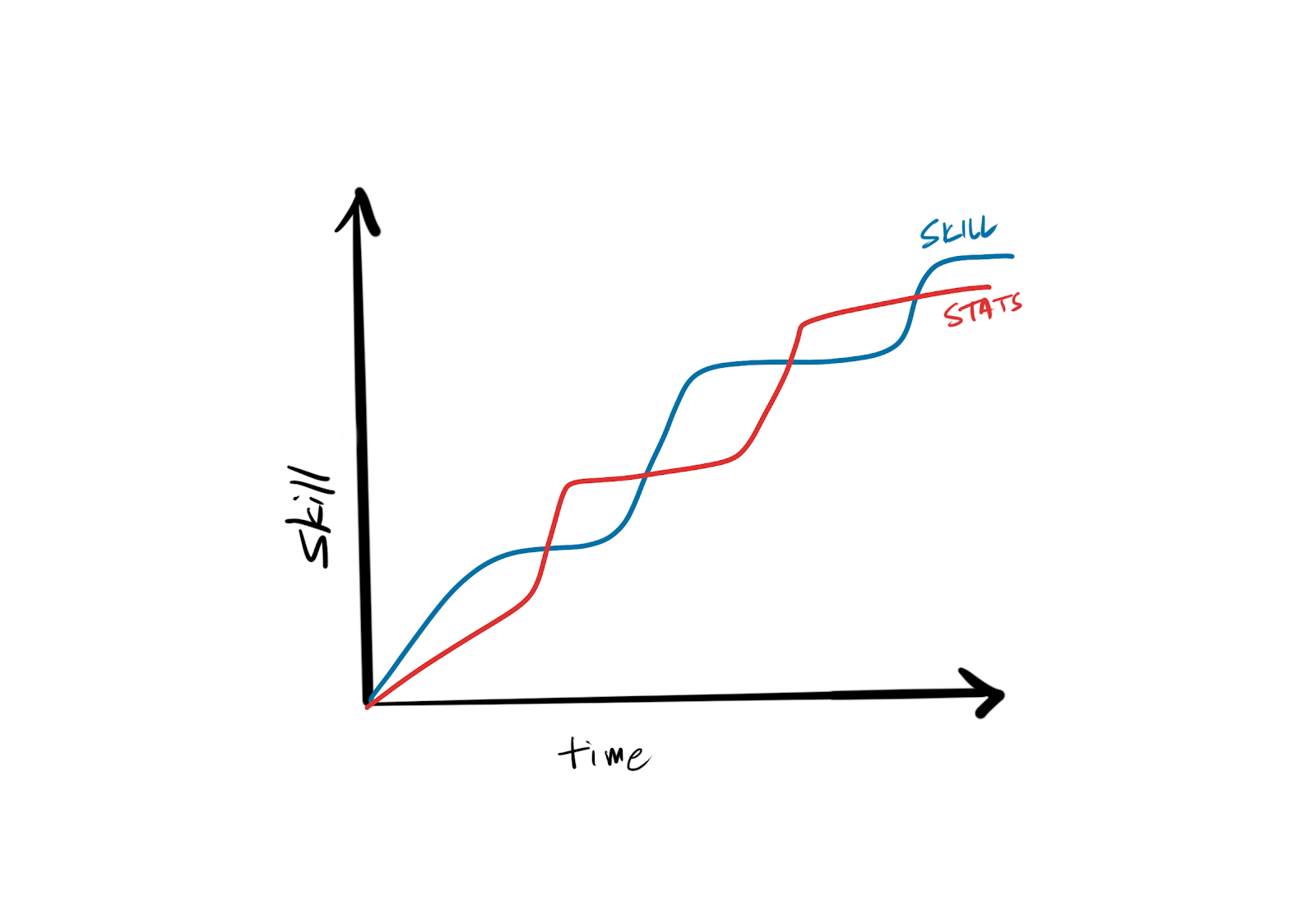 Now do this again, and again. Add a noodle that represents your character’s equipment improving over time. Add another for your spells increasing in power. And so on. 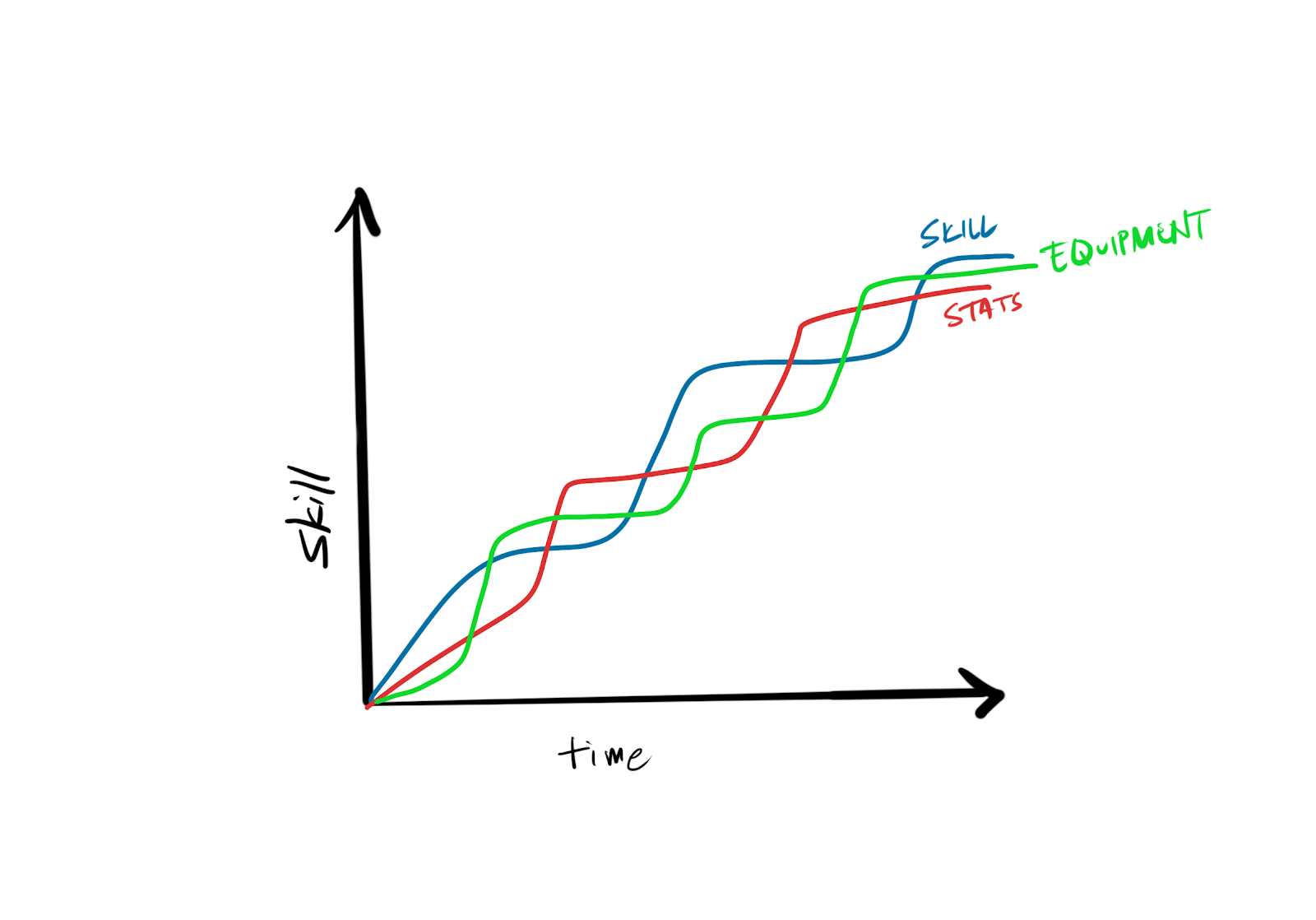 The crucial thing is that, as designers, we have more control over the shape of these noodles than we do over the player’s skill. We can’t control how quickly players fundamentally improve at a game, but we can significantly influence the rate at which they gain new equipment or power up their stats. It’s one reason why role-playing game (RPG) systems are so powerful – they enable us to pile on noodles and smooth over the inconsistency of player skill improvement.

This means even if you are in fact stuck on a skill plateau for now, we can still provide the illusion of improvement, thanks to the other noodles. Every time you play, you’re able to satisfy the need to demonstrate competency.

Back to the tennis analogy. Imagine you were practicing and improving, but at the same time, your racket was getting a little bigger, more accurate, and more powerful. Are you getting better because of the racket, or because of your innate skill? Who knows! Who cares! You’re having fun!

The reason that Noodle Theory works  is that your brain can’t really tell the difference between you getting better, versus your equipment or stats improving. Even when you know that it’s because you upgraded your gear (i.e., it had nothing to do with your skill), the part of your brain that pumps you full of dopamine for accomplishing a hard task isn’t smart enough to tell.

Once you see this, you see it everywhere in games. But this goes beyond just games – in any activity that involves long-term growth and improvement (learning tennis, getting better at your job, becoming a world-champion hot dog eater), people will stick with it longer if we can give them the illusion of improvement along the way. This illusion ironically leads to actual improvement simply because people end up keeping at it longer.

So give the people what they want: the satisfaction of competency, with a helpful bowl of noodles.

This concept was taught to me by the VP of Game Design at Pocket Gems, Jon Selin.