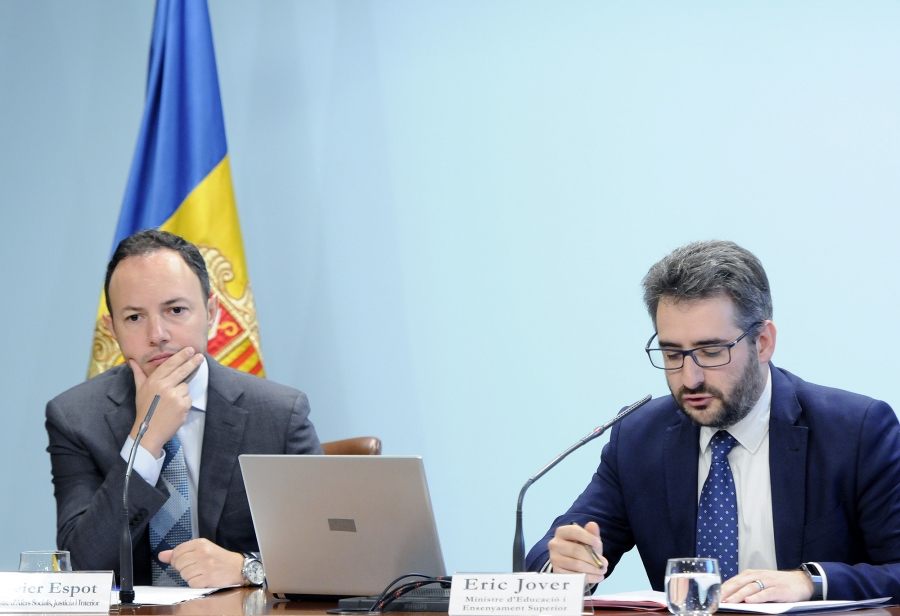 The ministers of Social Affairs, Justice and Home Affairs, Xavier Espot, and of Education and Higher Education, Eric Jover, presented this Monday the bill amending the rights of Children and adolescents and the draft law which defined the Criminal responsibility of minors. Both were approved at the last Council of Ministers. Both texts aim to give greater protection to minors and work in parallel.

The minister of Education and Higher Education has pointed out that the bill qualifying the rights of children and adolescents has been agreed on by taking into account the contributions of all the actors involved.
The text provides the coordination between public administrations, private entities, families and the same children and adolescents, and establishes the creation of the National Commission of Childhood and Adolescence, and the elaboration of the National Plan of Childhood and Adolescence, as a management tool and strategy towards this collective.

Likewise, the bill introduces the principle of priority for the budget and identifies the Raonador of the Citizen as an institution for the promotion and defense of the rights of children and adolescents.

One of the aspects that it regulates in detail is the protection against any type of abuse, with measures of prevention and awareness-raising. So, it creates a record of abuse, provides access to direct advice or complaint mechanisms for all citizens, and establishes measures to avoid the secondary victimization of children and adolescents.

With regard to the measures of protection, these are extended by adding the family care specialist or professional, for those children or young people with behavioral problems that are more difficult for family care. In these cases, the professionals who can do welcome to your family will receive compensation.

In addition, it also incorporates the option of residential intensive care protection for adolescents with disorders of conduct, recurrent or addiction. The Centre Residential Education Intensive is expected to be put into operation during 2019 on the Verge of Enclar.

On the other hand, with regard to the draft law defining the criminal responsibility of minors, Xavier Espot has underlined that it is a norm to give better responses to children. On the one hand the law will be more incisive with minor repeat offenders, but in addition, it will provide more solutions and guarantee measures for social reintegration and the prevention and prosecution of offences.

The bill defines for the first time that the law applies to people under age although during the criminal process they may well reach the age of majority. In addition, it designates the Court of Parliament to judge the criminal infractions committed by minors and is established expressly who shall instruct the criminal proceedings.

Among the new provisions of the text, Espot pointed out that it creates the figure of the ad hoc representative when the legal representative can not intervene in the criminal process. In addition, it considerably expands the catalogue of precautionary measures that can be applied, in order to promote education and reintegration.

Another remarkable change is the fact that the measure of internment in a closed regime may be imposed on minors who have committed a felony or to which a measure has been imposed previously for two or more minor crimes in the last two years. This is a step that allows us to be more incisive, because until now, this could only be applied internally in cases of having committed a major crime with a prison sentence exceeding 8 years or in case of recidivism. In this sense, the law has been clarified so that it matches the legislation in other countries.

The bill also increases the term of prescription of crimes over and contravencions criminal. It creates a record of criminal proceedings against minors and regulates the regime internally, as well as the disciplinary regime of juvenile centres.

Finally, Espot wanted to emphasize the new requirement that was included in the text, because the police, bailiffs, magistrates, prosecutors and clerks judicial proceedings involved in the criminal proceedings against minors will have to follow specific training programs.

The post Eric Jover and Xavier Espot have presented this Monday the bill amending the rights of children and adolescents and the draft law which defined the criminal responsibility of minors appeared first on ALL ANDORRA.