NEW DELHI: There’s no stopping Virat Kohli. Literally. The Indian captain, who is hands down the most prolific batsman in world cricket currently has now broken yet another record. The 29-year-old has become the fastest to complete 10,000 ODI runs. What will make this an extra special record for Kohli is the fact that he has broken his idol, the legendary Sachin Tendulkar‘s record. 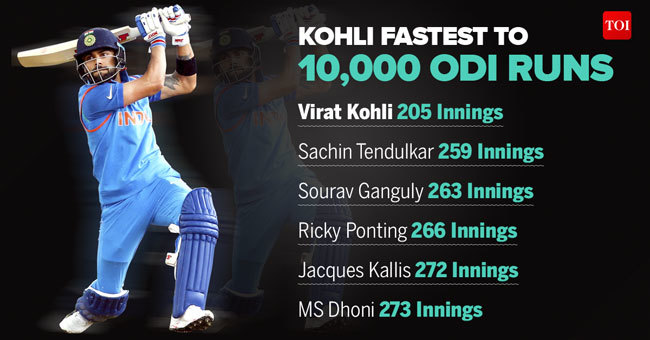 Kohli is now the fifth Indian batsman and the 13th overall to complete 10,000 runs in ODIs. Kohli achieved the incredible milestone during the second ODI against the West Indies at the YS Rajasekhara Reddy ACA-VDCA Cricket Stadium in Visakhapatnam.
Kohli hit West Indies’ Ashley Nurse for a single to enter the 10000-run club in the 37th over of the Indian innings.
Kohli, who scored a century in the first ODI, needed 81 runs to reach the landmark and the 29-year-old did it in style.
Apart from Kohli, the other four Indians in the 10,000 ODI runs club are Sachin Tendulkar, Sourav Ganguly, Rahul Dravid and MS Dhoni.
When he reached 48 in the 24th over of the Indian innings, Kohli also broke Tendulkar’s record (1573) of most ODI runs by an Indian batsman against West Indies.
Source : timesofindia