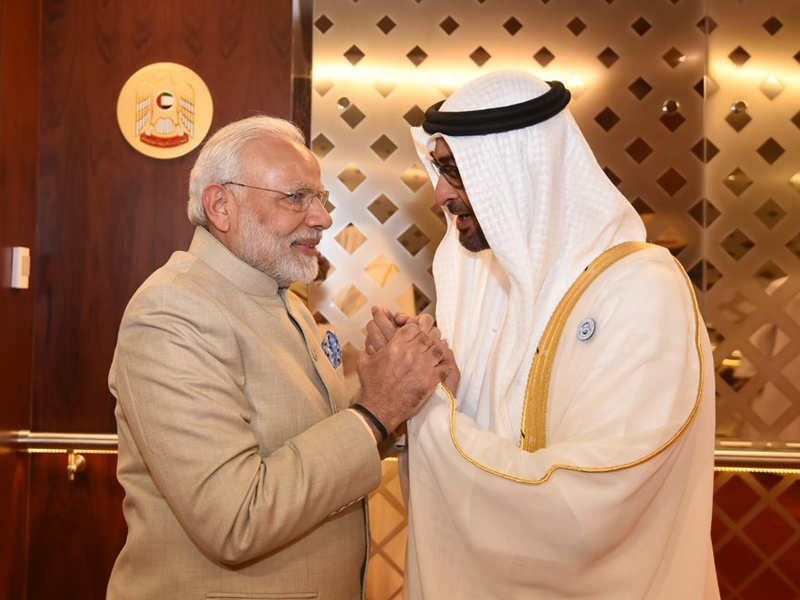 ABU DHABI: Prime Minister Narendra Modi on Saturday arrived here on a two-day official visit during which he will hold talks with top leadership of the Gulf nation and witness signing of nearly a dozen agreements to bolster political and economic ties.

Modi, who arrived here from Jordan on the second leg of his three-nation tour, was received by Crown Prince of Abu Dhabi Mohammed Bin Zayed Al Nahyan and other members of the Royal family at the airport.

PM @narendramodi landed in UAE. In a special gesture, he was received by HH Mohamed bin Zayed Al Nahyan…. https://t.co/4K3CyJS29j

“PM @narendramodi arrives in Abu Dhabi, United Arab Emirates to a ceremonial welcome. In a gesture of warmth and goodwill, PM was personally received by Crown Prince of Abu Dhabi and other members of the Royal family. UAE is a valued partner in an important region of the world,” Ministry of External Affairs Spokesperson Raveesh Kumar tweeted.

Soon after his arrival, Prime Minister Modi left for the presidential palace for a meeting with Mohammed Bin Zayed, the Crown Prince of Abu Dhabi and Deputy Supreme Commander of the UAE Armed Forces.

“We warmly welcome our state guest and valued friend, the Indian Prime Minister [email protected] to the UAE. His visit reflects our longstanding historical ties and is testament to our friendly bilateral relationship,” Mohammed Bin Zayed tweeted.

Prime Minister Modi, who is here on his second visit to the UAE, has several meetings lined up in the evening and will also attend a banquet in the UAE capital.

Various buildings in Abu Dhabi were lit in tricolor as the city was decked up to welcome Prime Minister Modi.

Nearly a dozen agreements and MoUs are expected to be signed between the two countries.

Modi is scheduled to address the Indian community tomorrow in Dubai after witnessing the groundbreaking ceremony of a temple in Abu Dhabi.
Prime Minister Modi will also deliver a keynote address at the World Government Summit in Dubai where India is a guest of honour this year.
On the first led of his trip, Modi travelled to Ramallah, becoming the Indian prime minister to make an official visit to Palestine.
From the UAE, Modi will travel to Oman.
Source : timesofindia