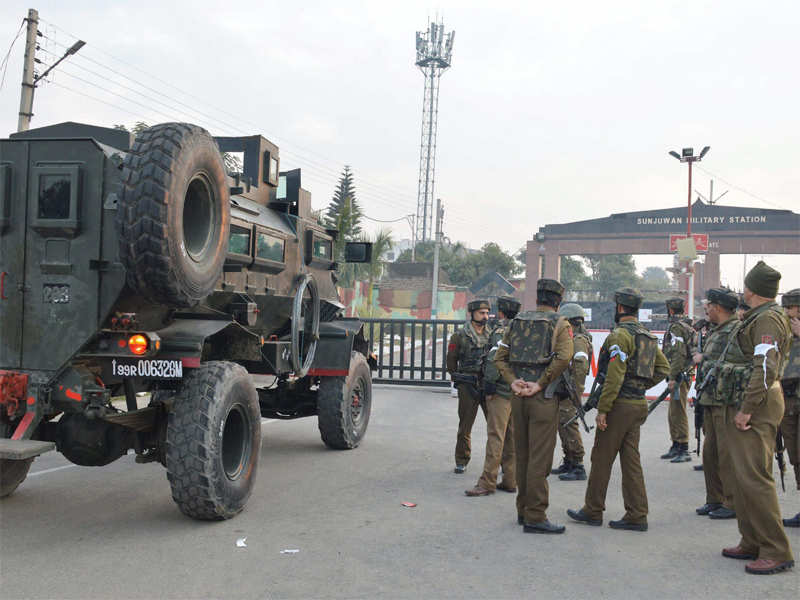 SUNJWAN (JAMMU): Distant booms of the guns broke early morning slumbers of residents of this garrison town on the outskirts of Jammu on Saturday.
And their initial belief of it being usual practice shooting inside the Army camp dissipated as the firing became intense and an alarm was sounded. Soon, it dawned on them — the Army camp has been targeted.

“It all began around 4.30am with deafening sounds of explosions and gunfire. Initially, we thought it was a routine practice firing but when there was an alarm from inside the camp, we thought something is wrong,” said Mohammad Yasir, a resident.

A group of terrorists of Jaish-e-Mohammed has struck on the Army camp. One Junior Commissioned Officers (JCOs) has been killed and six others including a Major-rank officer and daughter of an Army personnel injured in the attack, officials said.

The number of militants was not immediately available but preliminary reports suggest that they cut wire fencing on the rear side of the camp and entered into it.

The residents have moved out of their homes as a precautionary measure and are camping at safer places nearby.

Yasir said the heavy exchange of firing stopped at around 0830 hours and later by intermittent exchange could be heard.

Security officials present at the scene said the Army initially focussed on rescuing civilians inside the camp, spread over a vast area. The families of army personnel were at the camp.

Police and CRPF have thrown a cordon outside the camp so that no militant manage to escape from the camp.

Groups of BJP and Bajrang Dal activists appeared outside the camp and shouted anti-Pakistan and pro-India slogans.

“We are here to support the army… The cowardly act of Pakistan to target families of the jawans is condemnable,” a BJP activist said.
President of Anti-Terrorist Front Ashok Kumar said he has left for morning walk when he heard gunshots from the camp.
“We are in panic…if Army is not safe, how could be the local population. This area usually remains abuzz being the commercial part of the city. If they can enter into an army camp, they can strike anywhere,” he said.
Located on the Jammu-Delhi national highway, policemen had a tough time in managing traffic and keeping away the onlookers.
Source : timesofindia