Kasganj violence a blot on UP, says governor Ram Naik 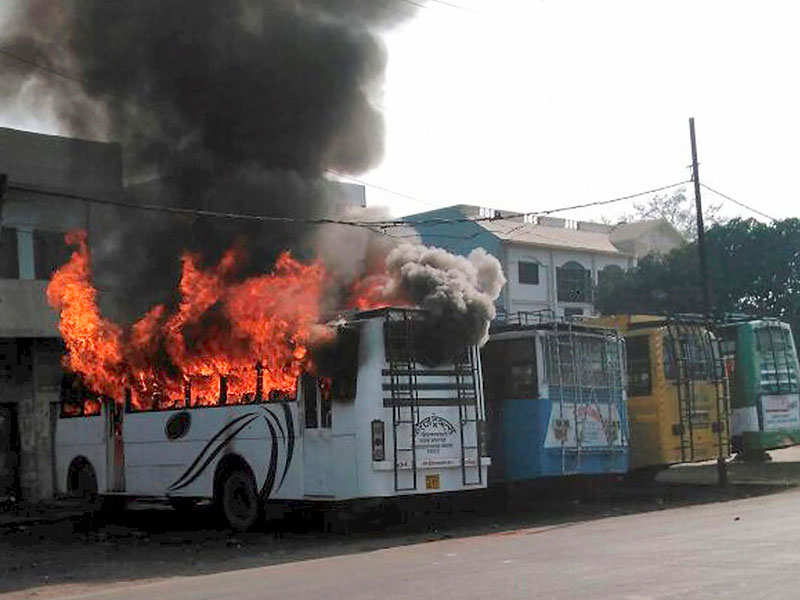 LUCKNOW / AGRA: Using unusually strong words, Uttar Pradesh Governor Ram Naik on Monday described the communal conflagration in Kasganj+ as a “blot on the state” even as the Yogi Aditya Nath government shunted out the SP of the troubled district.
Expressing his concern over the violence, the governor told journalists on the sidelines of a function organised to mark the death anniversary of Maharana Pratap in Lucknow, “Kasganj ki ghatna pradesh ke liye kalank hai (Kasganj violence is a blot on UP).”

Naik said the state government was probing the circumstances that led to the clash. He said that there was no such violence in the last nine months of the present government, but whatever happened in Kasganj should have been strictly avoided. Though Naik has, from time to time, alerted the BJP government in the state on the need to control crime and improve law and order situation, this is the first time that he has used such strong words.

In the first major action after the communal violence that started on Republic Day, the Yogi government shunted out Kasganj SP Sunil Kumar Singh and asked him to join police training school (PTS) in Meerut. The incumbent PTS SP, Piyush Srivastava, will replace Singh in Kasganj. Minutes before receiving the transfer order, Singh told TOI that the violence was a “deliberate political conspiracy”.

“The violence and arson on Saturday and Sunday was a deliberate attempt by miscreants to keep the district on the boil. These miscreants were backed by some local politicians, who had grudges against police and local administration, who in the past came down heavily on their illegal sand-mining activities,” he said.

Describing the clash on the morning of Republic Day as “unfortunate”, Singh said what happened on subsequent days was a deliberate attempt to affect peace and tranquility of the district. “Arsonists have been targeting areas on the outskirts of Kasganj city, so that the place will be in the news, and they can put pressure on the administration to release arrested criminals,” he added.
On Sunday night, too, two houses in Manuta Colony and PLGC Colony of Nadraigate area and a small grocery store on Station Road were set on fire by miscreants. The fires were brought under control and no casulty was reported.
On Monday, district magistrate R P Singh and the SP visited the house of Chandan Gupta, who was killed in the violence on Friday, and met the family members. The senior officers gave Rs 20 lakh in compensation to Chandan’s father Sushil Gupta. Rapid Action Force and Provincial Armed Constabulary personnel are still deployed in Kasganj city to avoid any further violence.
In another development, UP police chief Om Prakash Singh issued an 18-point note to SPs in all 75 districts for maintaining communal harmony and keeping a check on trouble-mongers to ensure that a repeat of Kasganj does not occur. In the note, Singh stressed on efficient use of electronic equipment such as CCTV cameras and drones in sensitive and violence-hit areas to identify unruly members in the mob. The DGP said that the routes on which religious processions, shobhayatras or other religious group events are to be held should be sanitised well in advance. Source : timesofindia

Kasganj violence a blot on UP, says governor Ram Naik