Tags: cricket mumbai played
November 9th 2017
View original
The Mumbai Cricket Association (MCA) is probably one of the greatest sports bodies in Indian sports history. With 44 finals and 41 title wins, its track re cord is un paralleled. What makes Mumbai the dominant force in domestic cricket is its club culture, the legacy left behind by its great players and tremendous support by the administration.

That Mumbai produced 70plus Indian Test players is remarkable.

Selfless coaches like Vasant and Mohini Amladi, Ramakant Achrekar, Ramnath Kenny, Vasant Patil to name a few, had a huge role to play in moulding all these players and polishing their games. As one reminisces the good old days of club cricket, one recalls rubbing shoulders with these giants in tensely fought matches. No one was above the other, no quarter given, one wanted to impress them to get noticed. Even one failure meant that you had to wait for a full year to get another opportunity. Respect for seniors came naturally. The dressing room was a temple of learning. One hung on to every word spoken by these giants.

And this is where the word ‘khadoos’ comes from. It means stubborn, tough, determined, one who has a never-say-die attitude and one who is always willing to go for the kill without ever being over confident. 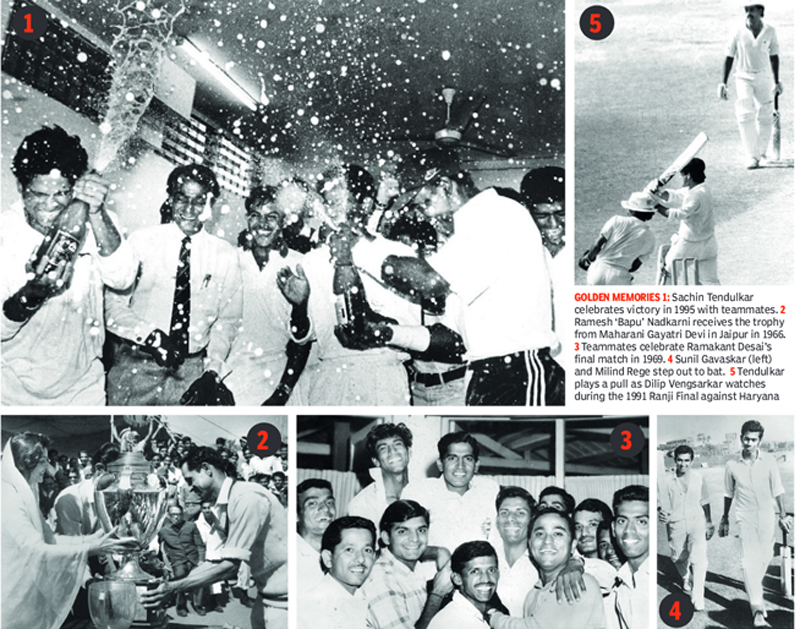 The seniors have always taken it upon themselves to shepherd a debutant. I remember, Sardesai asking for me as his room partner on my debut. One had seen these players from the North Stand a few months ago and then to share thoughts and five days with them was a dream come true.

The legacy of Merchant, Mantri, Umrigar was taken forward by Wadekar and Sardesai and then by Gavaskar, Vengsarkar, Manjrekar and Tendulkar.

Club cricket played a major role in Mumbai cricket. It was said that the standard of cricket in Times Shield was far higher than what one witnessed in First Class cricket. This tournament not only gave the Mumbaikar a secure future, but also the confidence to play against top opposition in the country. That it is not open to all, now is a matter of debate but many Indian stars from outstation participated. Imagine playing against Tiger Pataudi, Salim Durrani, Hanumant Singh, G Vishwanath, Abid Ali, and Rajinder Goel on dusty tracks on the maidans of Azad and Cross. Tata, ACC, State Bank, Mafatlal, Nirlon, Air India and lately DY Patil, Customs, Indian Oil, BPCL to name a few were some of the companies which supported corporate cricket. Many teams have come and gone but the spirit of Times Shield goes on.

Kanga League, Purshottam and Talim Shield, Police Shield are some of the 90-odd tournaments played with the same gusto for youngsters to display their talent.

Nowhere in the world is cricket nurtured the way it is in Mumbai and for that the enthusiastic and supportive MCA administrators deserve kudos.

During my time, teams were paid ‘smoke money’ of Rs 5 a day but that did not matter as one played for pride and passion. While one is aware that a lot of money has come into the game, the willingness to spend all that on the welfare of the sport needs to be applauded.

Teams at all levels travel in style and the legacy left behind by those administrators of yesteryears is carried forward.

(AS TOLD TO GAURAV GUPTA)

This post first appeared on Daily Kiran, please read the originial post: here
People also like
64 Awesome Things to Do in Costa Rica, Where to Stay, Know Before You Go
The A500 Mini Review
Dash Cam Footage Shows Moments Before Uber Driver & Mother Of Four Is Murdered In Pennsylvania
Robert Pattinson Beard & How You Can Ace This Thick Style