Why India is dredging rivers in Bangladesh

DHUBRI (INDIA-Bangladesh BORDER): Pronab Payeng from Majuli is a navigator of SL Lohit, one of the five survey vessels stationed in the Brahmaputra. For the last 27 years — since he has been associated with Inland Waterways Authority of India (IWAI) — Payeng has spent more nights on the River than on its bank. He understands the pulse of the river, which singer Bhupen Hazarika once termed Mahabahu (the mighty); the Assam stretch of the river from Sadiya to Dhubri, for example, is 891 km long and 15 km wide near Dhubri, according to satellite images procured by the state’s water resources department. For hydrographic surveyors measuring the depth of the river through the thalweg survey, Payeng is an asset beyond his navigational skills. He can tell them with precision the locations where the river has turned shallow — Subansiri Mukh (Subansiri is the largest tributary of the Brahmaputra), Borgang Mukh, Bhekeli in Majuli, Orang et al. The thalweg survey duly confirmed what Payeng’s intuitive intelligence would only reinstate — a thalweg is the line of lowest elevation in a watercourse — necessitating interventions like dredging.

The government of India in July sanctioned Rs 400 crore to dredge the Brahmaputra. Four dredgers have already been deployed and two more are being procured. Each dredger — including a cutter suction dredger (CSD), a tug (which pushes or tows the CSD) and houseboat (for night accommodation) — costs between Rs 35 and 40 crore. 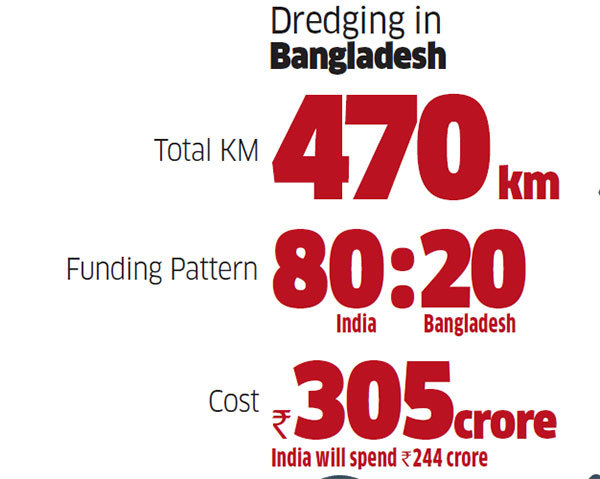 Then, New Delhi has tied up with the Bangladesh Inland Water Transport Authority (Biwta) to dredge two river stretches — from Sirajganj to Daikhawa (175 km) in the Jamuna in Bangladesh (which is the Brahmaputra in India) and from Ashuganj to Zakiganj (295 km) in the Kushiyara, a distributary river across Bangladesh and Assam and a branch of the Barak river of south Assam. India has committed 80% of Rs 305 crore required for these two stretches; the remaining will come from Bangladesh. The contracts are likely to be awarded by the end of this year; Indian and Bangladesh dredging companies or their consortia will be eligible to bid, according to a senior IWAI official privy to the matter. The dredging in the Bangladesh stretches will begin by February-March 2018, with the contractors getting two years to dredge 2.5 to 3 metres of LAD (least available depth) in a 45-m-wide channel, with a binding clause of five years of maintenance.

The Alternate Route
If the two neighbours have their way, by mid-2020 India will cease to depend only on the Chicken’s Neck, the 22-km corridor near Siliguri in West Bengal that connects the Northeast with the rest of the country. Once the dredging in Bangladesh is complete, large vessels can move from Varanasi in National Waterway 1 (NW-1, the Ganga) to NW-2 (Brahmaputra) and NW-16 (Barak) via Bangladesh river channels, thereby reducing the over-dependence on the narrow stretch.

“Dredging in Bangladesh will help reducing congestion in the Northeast,” said Nitin Gadkari, minister of road transport, highways and shipping in a detailed written reply to ET Magazine’s questions on the rationale behind India’s largesse to dredge channels in Bangladesh. The minister may not be mandated to talk in detail about the strategic importance of the alternative route, but India’s quest to build an alternative route, that too expeditiously, is only logical considering the recent Chinese military buildup at Doklam, to the north of the strategically-vulnerable Chicken’s Neck, on the pretext of expanding its road connectivity. 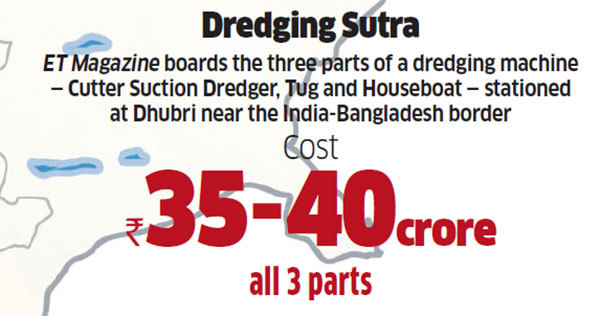 Though there was an official “disengagement” in the area since August 28, recent reports suggest that about 1,000 personnel belonging to People’s Liberation Army are still stationed in Chumbi Valley near the Siliguri corridor.

The river route will have economic spinoffs as well. “Britishers used cargo steamers for carrying petroleum, timber and coal products from Assam to the seaports through the rivers. But that route became redundant. Now, dredging in Bangladesh will once again make the river channels navigable throughout the year. Landlocked Northeast will then have access to the seaports,” says Assam Chief Minister Sarbananda Sonowal. Siliguri corridor and will also provide an alternative route to the There will be dividends in terms of fuel and environmental costs, as one vessel with a capacity of 2,000 metric tonnes of cargo will keep as many as 200 trucks off the road. According to IWAI estimates, cost of water transport is the cheapest compared to road and rail (see How Waterways are the Most Economical). What is more, the luxury tourist vessels currently cruising from Varanasi to Haldia in the Ganga and from Pandu (Guwahati) to Neemati Ghat (near Jorhat) in the Brahmaputra could find new routes to sail.

The existing Indo-Bangladesh Protocol route (1,647 km) connects Kolkata with Silghat (near Nagaon in Assam) and then Kolkata with Karimganj (south Assam). Under this protocol, the dos and don’ts of inland water transit and trade including customs checks, documentation, opening of branch offices, appointments of agents by vessel operators, transactions in the port of calls and the like are clearly defined. Under this route, ships are allowed to stop on a voyage only in key ports — Narayaganj, Khulna, Mongla, Sirajganj and Ashuganj in Bangladesh; and Kolkata, Haldia, Karimganj, Pandu (Guwahati) and Silghat in India.

And it’s not that cargo vessels cannot pass through Bangladesh waters. Only four months ago, a vessel carrying iron rods from Kolkata sailed via Bangladesh to Tripura. There was plenty of excitement at Ashuganj port in Bangladesh, with none other than the shipping minister receiving the vessel. 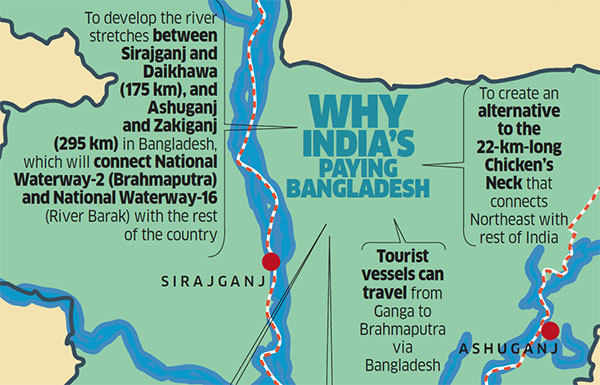 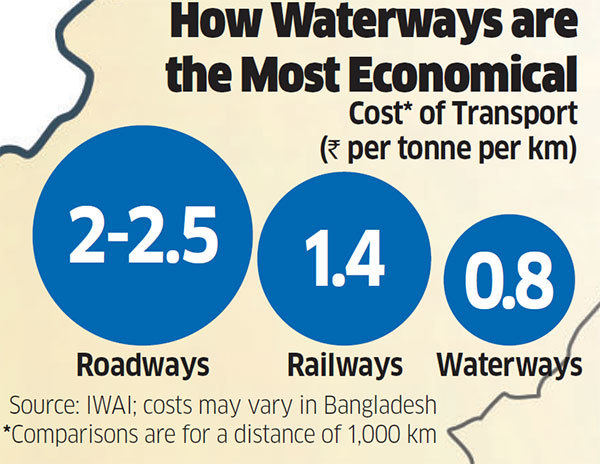 The Annual Deluge
The problem, though, arises when water levels recede after the monsoons, making the river unsuitable for large vessels to navigate. That’s where the dredging is expected to play a pivotal role. The companies involved in dredging and building of river ports may find a new lease of life, as the NDA government is clearly betting on developing waterways as an alternative and cost-effective way of transporting cargo. The National Waterways Act declared as many as 111 national waterways encompassing 24 states in India, up from mere five waterways prior to April 2016 when the legislation came into effect.

A Rs 5,369 crore-project to develop NW-1 from Haldia to Varanasi is currently underway in a 50:50 partnership between the Centre and the World Bank. The project, which will enable the movement of large vessels of 1,500-2,000 tonnes capacity, is scheduled to be completed by 2022-23. Similar projects are on the drawing board to develop the Cumberjua canal, and Mandovi and Zuari rivers in Goa (Rs 23 crore), canals in Kerala (Rs 1.6 crore), Gandak river in Uttar Pradesh and Bihar (Rs 12.91 crore), and the Rupnarayan river (Rs 24 crore) and Sunderbans Waterways (Rs 18.1 crore) in West Bengal; dredging will be a major component of all these projects.

Harshvardhan Bhatnagar, president of Ardeshir B Cursetjee and Sons Ltd, a company established way back in 1810 that specialises in maritime activities including dredging, says that the company has been in talks with European and US dredger manufacturers to buy new-age machines. The company currently owns five dredgers. “We foresee opportunities for large and longterm contracts for dredging. They will offer a high occupancy rate of dredgers.” Bhatnagar adds that the company will compete for the work in Bangladesh only after understanding the terms and conditions.

Can the dredging be a flood mitigating mechanism too, considering that an unstable Brahmaputra is one of the reasons for annual floods in Assam? Bhatnagar isn’t too upbeat. “Dredging in general is not a tool to control floods. The merits of dredging for flood mitigation will, however, depend on case to case.”

Assam has witnessed four rounds of floods this year that killed over 150 people, and the CM is counting on dredging to alleviate flooding woes. “Dredging will reduce floods as the water-carrying capacity of the Brahmaputra will increase,” reckons Sonowal, echoing what he had said to this writer in an interview in July when the Assam flood was at its peak, and the towns like North Lakhimpur were almost submerged. 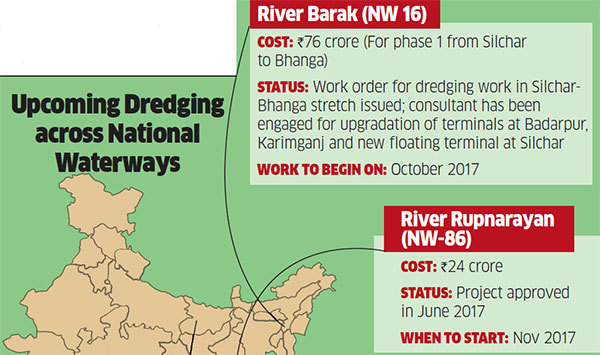 The Sed ment Element
In Dhubri where the Brahmaputra is currently the widest at 15 km, before it enters Bangladesh and changes its name to Jamuna, dredging was undertaken for a month last winter to facilitate a RO-RO (roll on, roll off ) service to ferry goods and passengers between Dhubri and Hatsingmari (the southern path of the Brahmaputra), a distance of 32 km; this made a circuitous road route of 220-km via Jogighopa redundant. The key part of the dredger — CSD-Mandovi — excavated sand and deposited it on a nearby existing sand shore with 200-m-long pipeline. But a 45-m channel being dug in a river that’s as wide as 15 km may be a totally different ballgame. Gadkari has talked about using the sand to build highways, but how feasible is that?

Experts who ET Magazine spoke in Dhubri clearly say that there’s no way that the excavated sand could be thrown onto the side of the river. Also, while throwing away the sand, the pipeline contains 30% water along with 70% sand. This means that if the pipes are directed at the riverbank, they’re likely to create havoc for those living by the riverside. Chandan Mahanta, professor of civil engineering department at IIT-Guwahati, suggests that there should first be a pilot to judge efficiency of dredging before more dredgers are deployed. “To quantitatively measure the efficiency of dredging in the Brahmaputra, carrying out a pilot project in and around dynamic places like Majuli may be useful, if it’s accompanied by bank stabilisation. However, considering the enormous and continuous inflow of non-cohesive sediments, a comprehensive approach will be essential to make even localised dredging somewhat effective,” says Mahanta.

The highways — and the sand for them — can clearly wait. The first priority is a waterway that connects the northeast to the rest of the country.

Three men in a boat
ET Magazine travels 1.5 km on a survey vessel down the river Brahmaputra

SL Lohit is one of the five survey vessels presently stationed in the river Brahmaputra. The others are SL Subansiri, SL Barak, SL Dibang and SL Burhidihing, all named after Assam’s rivers or tributaries. Early this week, it began a seven-day-long journey upstream from Pandu port (near Guwahati) to Neemati Ghat (near Jorhat). It has two mandates. One, the hydrographic surveyors undertake a thalweg survey mainly to measure the depth of the river and spot the areas where the LAD (least available depth) is below the permissible level of 2.5 metres. Two, it escorts a two-storied river cruise vessel MV Mahabaahu that ferries foreign tourists from Guwahati to Jorhat, which touches the Kaziranga National Park, a sanctuary known for its one-horned rhinoceros.

As Sandeep Kumar and Sonu Singhal, both hydrographic surveyors with a civil engineering background, switch on the machine in the airconditioned cabin of SL Lohit, they can read and record the depth of the river, the vessel’s location and speed, and also the route it’s taking. Near Guwahati, they find the depth of the river as high as 29 feet (8.8 metres). “The riverbed near rocky hills gets eroded over time, which explains the fabulous depth here”, the surveyors discuss.

But the Brahmaputra has many locations with shallow depth, something that forces the government to contemplate the deployment of dredgers — six to begin with. For example, the surveyors of SL Lohit found many shallow areas in a survey undertaken only last month. Here are five locations with the least depth:

Why India is dredging rivers in Bangladesh