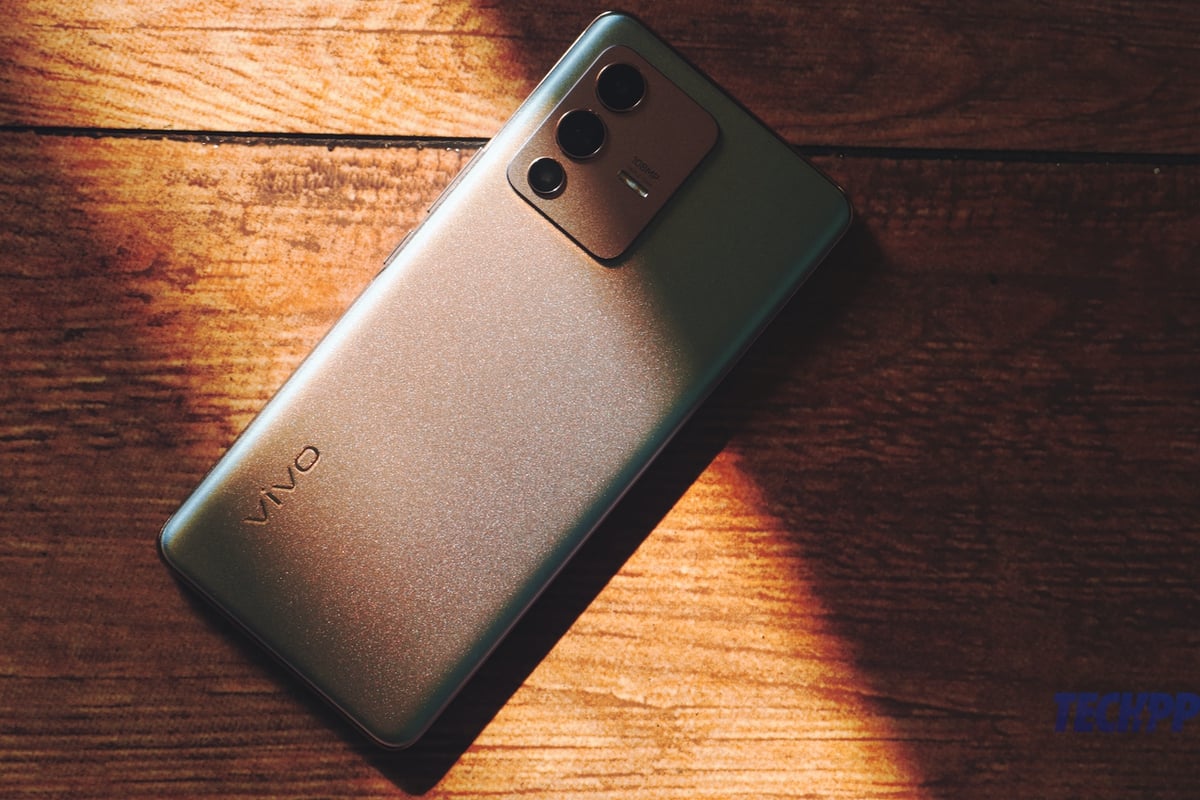 The year 2021 saw the Rs 40,000 price point emerge as a competitive zone with the likes of Xiaomi, Samsung, and OnePlus releasing devices that tried to hit the middle ground between the upper mid-segment and the lower premium one.

And 2022 has got underway with Vivo adding its own contender to the list – the Vivo V23 Pro. 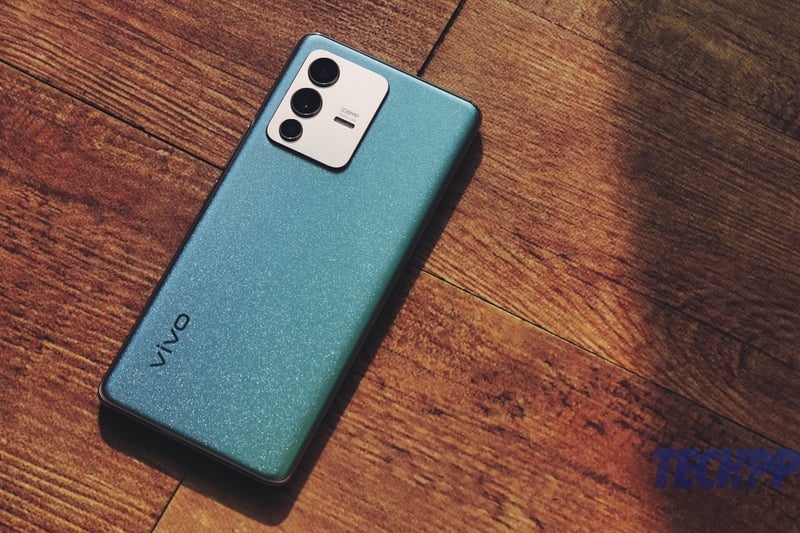 Vivo has taken a very different approach from its competitors at around this price point to the brand’s credit. While most have tried to play up their spec sheets and unleash potential “flagship killers,” Vivo has developed a device that focuses on style rather than benchmark scores and spec readouts. It might not have the heavy-duty specs that some of the devices at this price point do, but it has other features that they do not.

Slim, very stylish with a color-changing back

The Vivo V23 Pro will stand out from most of the phones in the market because of its design. At a time when flat, straight sides are coming back into fashion, Vivo has elected to go with the classic premium Android look of a curved display and thin, tapering sides. As a result, and rather remarkably, it is striking both from the front and the back.

The back, of course, is the one that will catch attention straight away. It comes with what Vivo terms “color changing Fluorite AG Glass.”

As its name indicates, it changes colors depending on the angle at which light falls on it. Now, this is not something altogether new – we have seen it before, most notably on the Mi 11X Pro and a few other devices – but Vivo’s implementation of it is easily the most striking. We got the Sunshine Gold version (there is also a more ‘normal’ Starlight Black), and the back kept switching from gold to a very pleasant bluish-green shade. Definitely very eye-catchy.

In a neat touch, the three cameras at the back are in a large, rectangular enclosure, and this enclosure does not change color but remains golden (in our case) irrespective of the color change going on around it. The back also has a smooth texture which not only feels premium but does not pick up smudges either, so you can actually use the phone without its cover (always a good thing, in our opinion). 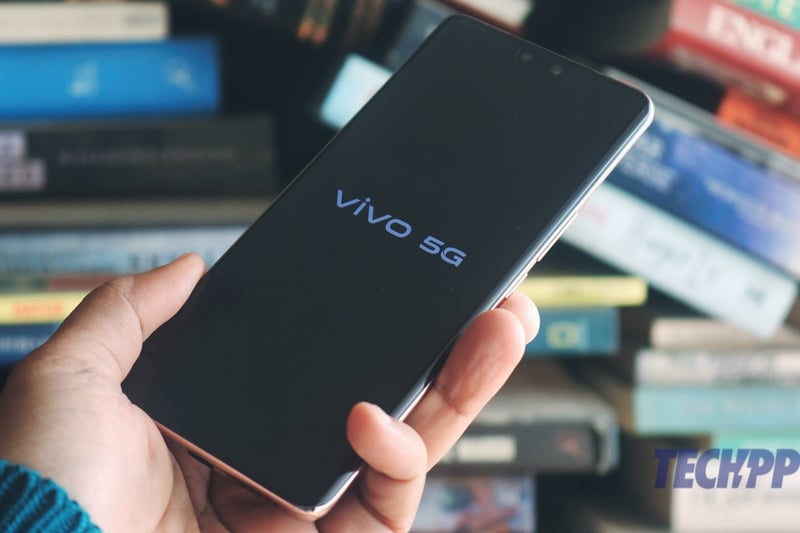 The front will turn heads not just because it is curved but because of a slightly large-ish (by Android phone standards) notch located at the center of the top of the 6.56-inch AMOLED display. Some – especially those used to tiny punch hole notches in the corners – might find it intrusive, but in a world dominated by the iPhone, we were not too distressed by it. However, the absence of dust and water resistance is a bit of a downer at this price point, as most devices now have it.

At a mere 7.36 mm slim, Vivo claims the V23 Pro is the slimmest phone with a 3D display out there. It is definitely not a small phone with its length of 159.46 mm, but at 171 grams, it is on the lighter side, given its screen size. With that curved display, color-changing back, and clean finish, the Vivo V23 Pro is easily the most stylish phone we have seen below Rs 40,000, or even Rs 50,000 for that matter. 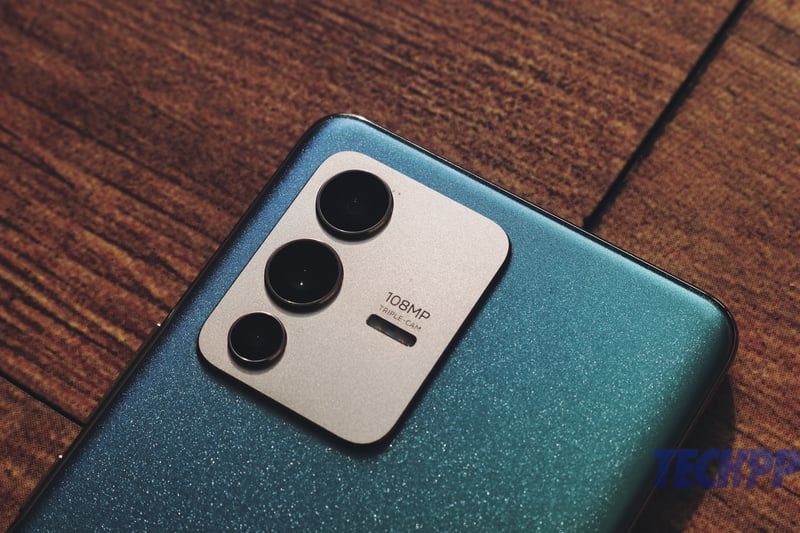 “Professional photography” are the words printed right on top of the Vivo V23 Pro, something we saw in its flagship X series as well. Although there is no Zeiss branding, there is significant camera muscle on the V23 Pro to justify that tag. This is perhaps the first Vivo phone in the Indian market to sport a 108-megapixel sensor at the back, accompanied by an 8-megapixel ultrawide and a 2-megapixel macro camera. That slightly large notch at the front has two cameras too – a 50-megapixel main camera and an 8-megapixel ultrawide, making it one of the few phones out there to come with dual selfie cameras.

It is a lineup that delivers some very good results. The main 108-megapixel camera snaps the sort of pictures a lot of people will like – with bright, slightly oversaturated colors and a lot of detail. Admittedly, the colors are not as eye-popping as on some other phones, but by and large, if you stick to using the phone in good light conditions, you will get results that look very pleasant, even if just a teeny bit unreal at times. 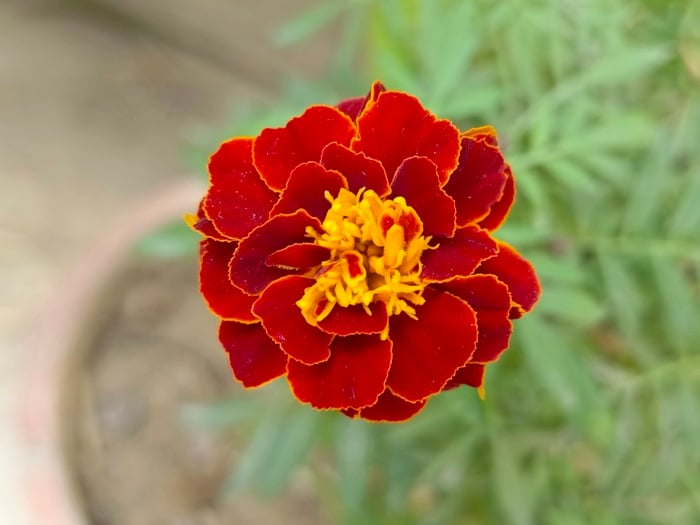 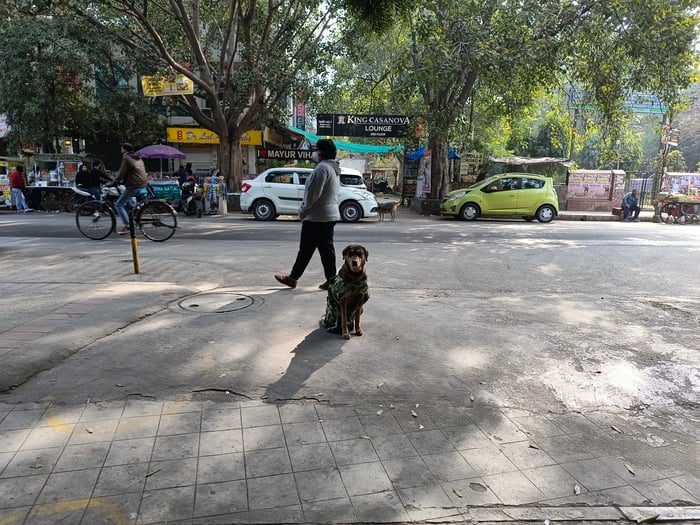 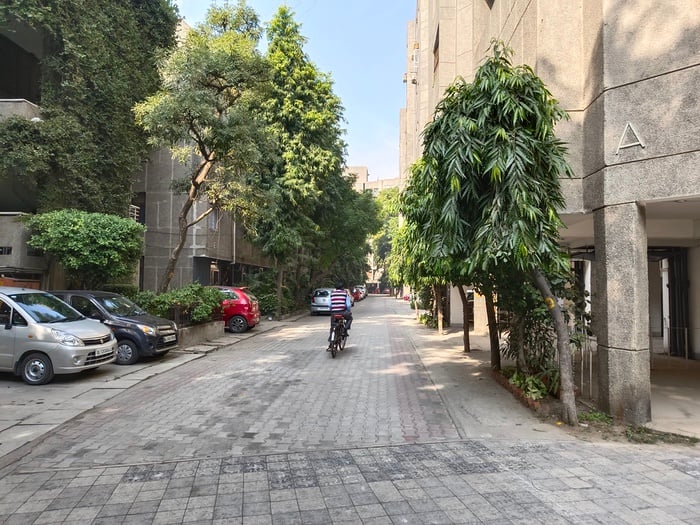 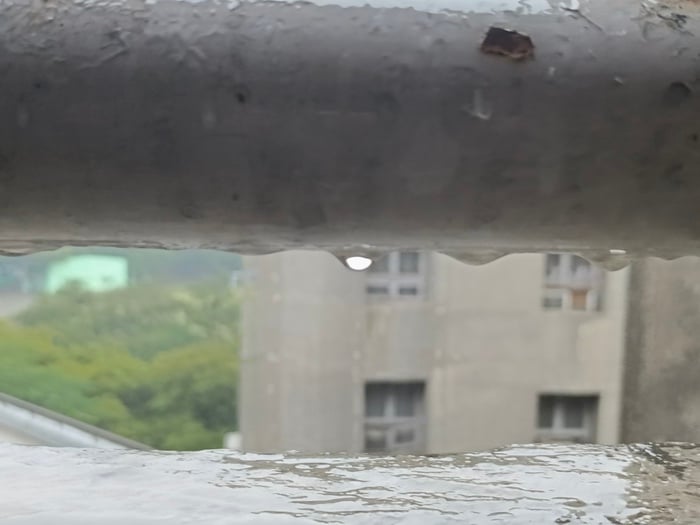 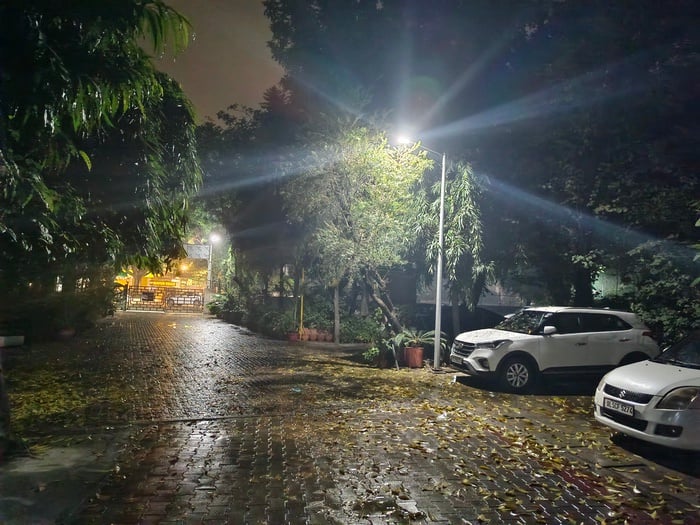 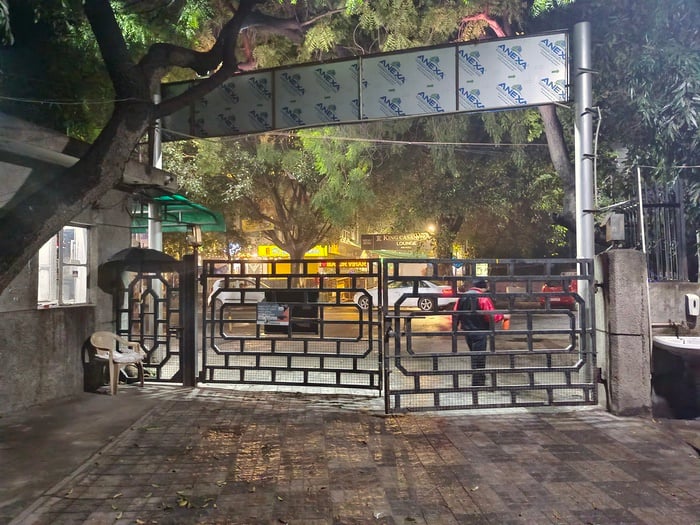 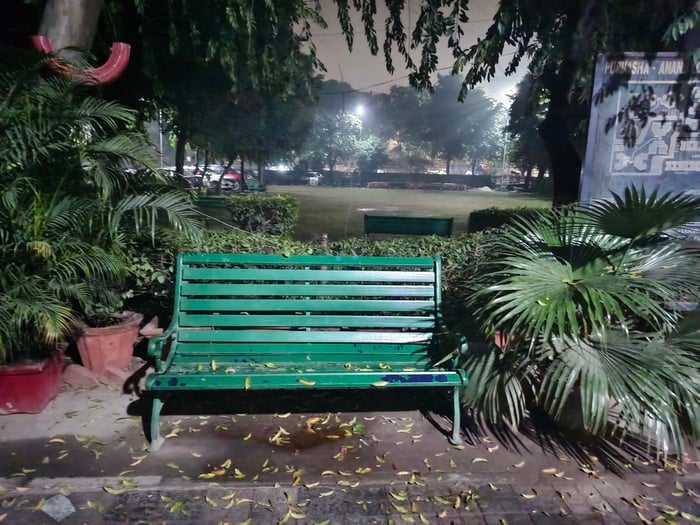 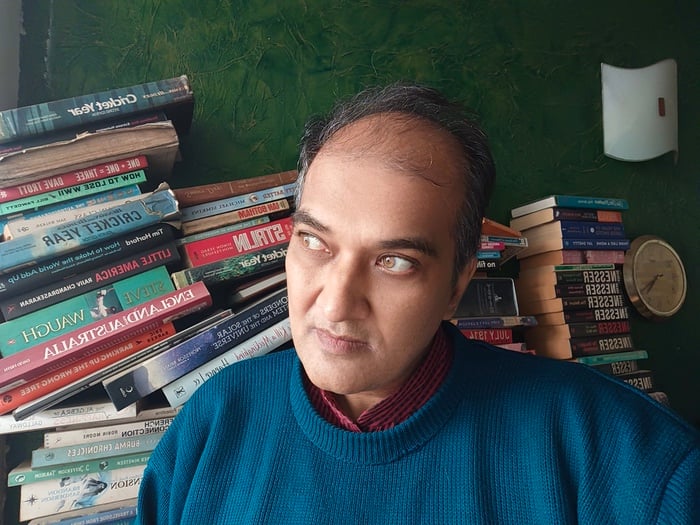 The secondary sensors are not quite as good – the ultrawide sensor will give you a wider perspective, but detail does get compromised, and the performance does not convince us of the 2-megapixel macro (take a shot by the main sensor and crop it for better results). Low light performance is decent, too, with the stress being on delivering very bright colors once again, although detail is not the greatest.

None of the cameras on the V23 Pro come with optical image stabilization (something the OnePlus Nord 2 is making a factor in this zone), but that does not stop them from giving us some very good photographs and videos. Just make sure the light conditions are generally good. 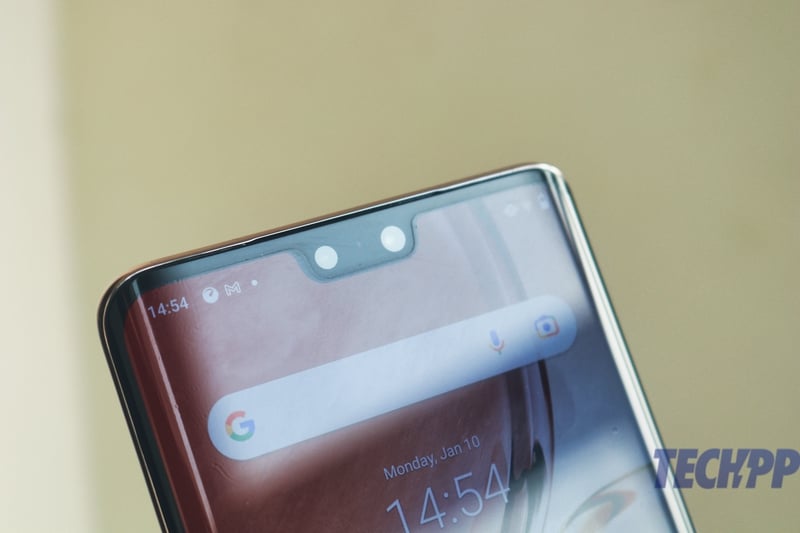 If the rear cameras (well, mainly the main rear camera) of the Vivo V23 Pro are very good, its front cameras are exceptional and perhaps the best we have seen on any Android smartphone. The combination of a 50-megapixel main sensor and an 8-megapixel ultrawide means you get a tonne of detail in selfies. Although there is a lot of “skin smoothening.” The video quality of the front-facing cameras is also very impressive, making this a phone that content creators will love. Vivo has also added dual flashes at the top of the phone for better low-light selfie snaps. We would not recommend using them in pitch dark conditions, but they are very handy when the lights start dipping a little.

This being a Vivo device, there are a truckload of image shooting and editing options. From special night modes and portrait modes to using both front and back cameras at the same time to pro settings and a number of effects and filters, the V23 Pro allows you to do a whole lot. So much so that, at times, it gets a little overwhelming. But, all in all, the V23 Pro comes with a very good set of cameras, perhaps the best on a non-X series Vivo device. 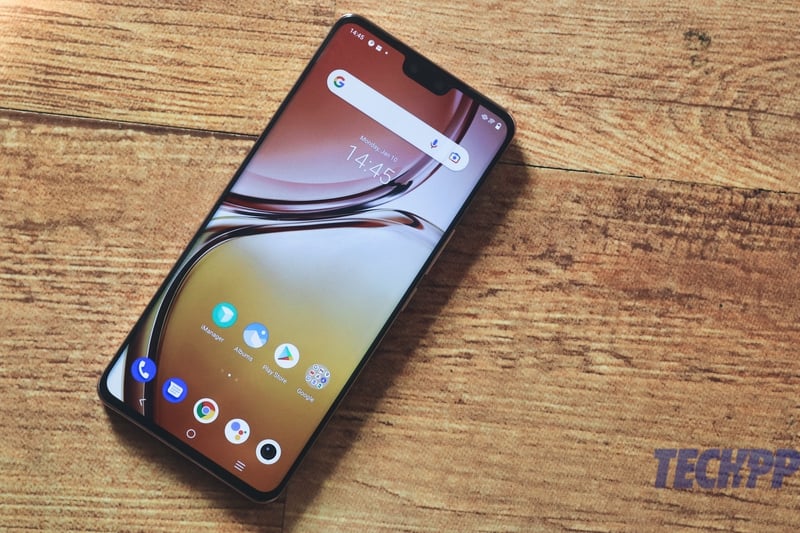 The Vivo V23 Pro is overall a very solid performer. The 6.56 inch AMOLED display is a Full HD+ one. It comes with a 90 Hz refresh rate with a Smart Switch option that lets the display switch between 90 Hz and a more normal 60 Hz refresh rate depending on the content being shown on it. Of course, there are brighter displays with higher refresh rates at this price point (and even below it), but if you are into viewing a lot of video content, this one will more than suffice.

There is also a fingerprint scanner beneath it, which works smoothly although we prefer scanners on the side or even the back; Multimedia fans will feel a little let down by the absence of stereo speakers – the single speaker is impressively loud but does not give the sort of immersive experience that you get from two speakers. There is also no 3.5 mm audio jack on the device, but that is something we are getting used to at this price point. 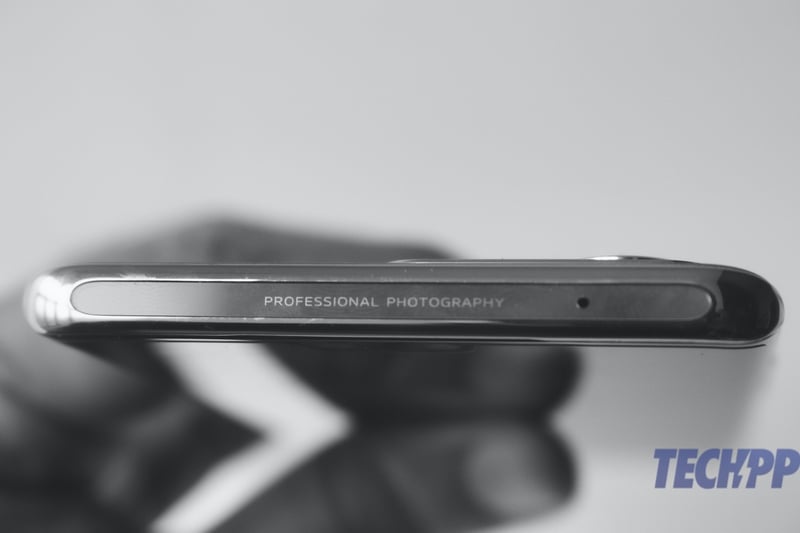 Running the V23 Pro is the MediaTek Dimensity 1200 processor, paired with 12 GB of RAM and 256 GB of storage (there is also an 8 GB / 128 GB variant), with storage not being expandable. While this is a very capable processor, it is seen by many as a step below the Snapdragon 870. In fact, there are devices below Rs 30,000 that feature this chip.

But that does not mean that the Dimensity 1200 is not a good performer. Unless you are looking to play every game at maxed-out settings or trying to do heavy video editing at a crazy speed, the Vivo V23 Pro will handle whatever you throw at it with a degree of ease. It will not set crazy benchmark scores, and there will be the odd lag and pause as you get into the more heavy-duty task zone, but you will be able to do almost everything you can on a flagship on this device. 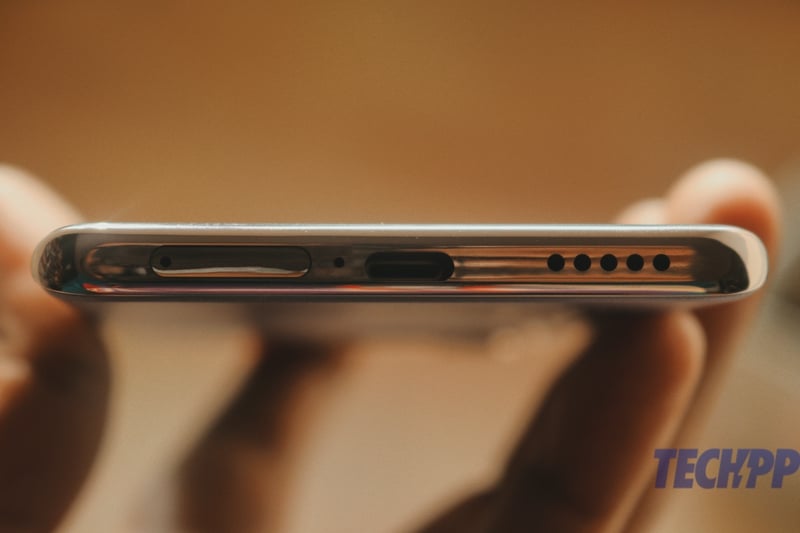 Another reason for the phone being a smooth performer is the fact that it runs on Android 12 – one of the first phones to be released in the Indian market with the latest Android out of the box. Of course, Vivo’s Funtouch OS is laid over it. It runs very smoothly indeed, and although stock Android fans might not like the additional apps and features, we do not think regular consumers would have too many issues with it. The phone also comes with all the connectivity options (Bluetooth, Wi-Fi, GPS) you would want, including support for 5G, although there is still no sign of the network in India.

The 4300 mAh battery will generally see off a day of normal use, but you will need to keep the charger or a battery pack handy if you use those cameras a lot. Despite being slim, the phone does not heat up as much as other thin devices. However, there is a 44W charger in the box, and it can charge the phone from about 0 to 60 percent in slightly more than half an hour and from 0 to 100 in around an hour. That might seem a little slow compared to some of its competitors, including the Warp Charge sporting OnePlus devices, but it should be more than sufficient for most users.

For the stylish crowd, rather than spec chasers 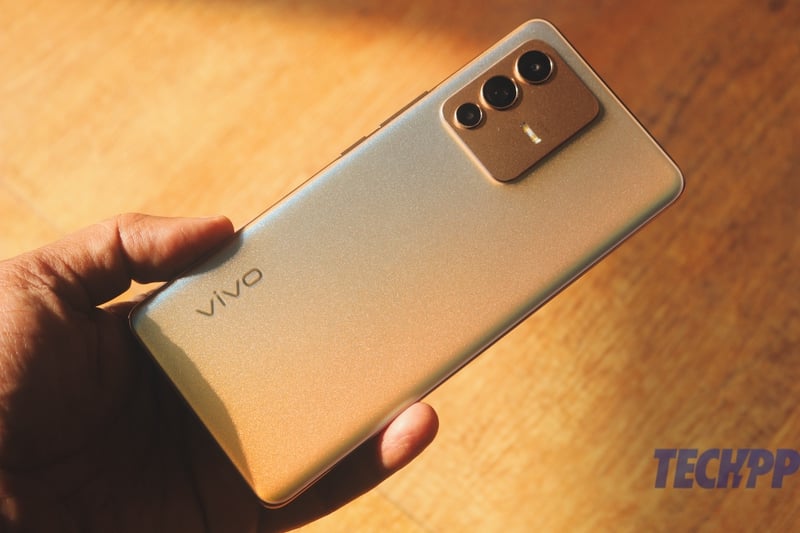 The Vivo V23 Pro is priced at Rs 38,990 for the 8 GB/ 128 GB variant, with the 12 GB/ 256 GB variant priced at Rs 43,990. That does make it a little expensive when compared to other phones running the same processor, most notably the OnePlus Nord 2 and the Poco F3 GT, both of which are priced below Rs 30,000. It will also have to contend with the likes of the OnePlus 9 RT, the Mi 11X Pro, and the iQOO 7 Legend, all of which are priced in the same range but come with the flagship Snapdragon 888 processor and displays with higher refresh rates.

The Vivo V23 Pro, however, is not really for spec chasers. It is more for those who want a phone that is a steady rather than spectacular performer, is very flauntable, and ticks the camera (especially the selfie camera) and curved display boxes.