11 Best Wireless Chargers for iPhones to Buy in 2021 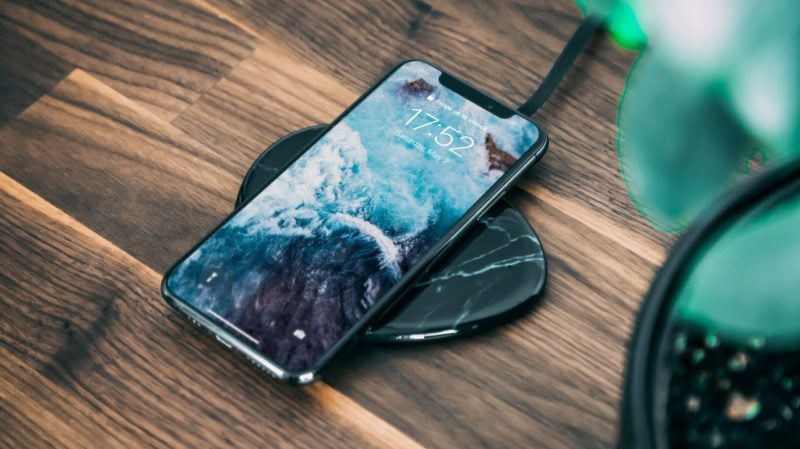 Apple is known for always being late to parties, so support for Wireless charging was also only added when Android devices already had a few years under their belt.

Fortunately, the tech giant did not develop its own method but used the most widely used standard for wireless charging – Qi.

There are already reports that Apple plans to equip its iPhones without ports in the future, so it is safe to say that wireless technology is the future.

That’s why, today, we have compiled a list of the best iPhone wireless chargers that you should check out.

What is a Wireless Charger?

Before looking at the best wireless chargers for iPhone in 2021, let us first understand what a wireless charger is and how it works. Do not worry; I will keep things simple and not make you regret skipping physics in school.

Apple has restricted the wireless charging speed of iPhones to 7.5W, so you don’t have to spend more on faster-charging accessories as such.

Newer iPhone models such as the iPhone 12 and iPhone 13 series also support MagSafe. In the case of MagSafe, both the wireless charger and the iPhone are equipped with magnets that create a strong connection by adequately aligning the coils, resulting in faster wireless charging speeds.

Of course, Apple has its own Magsafe charger, but there are plenty of third-party Magnetic chargers (Magsafe chargers) which you can purchase. We will cover them all in this article. 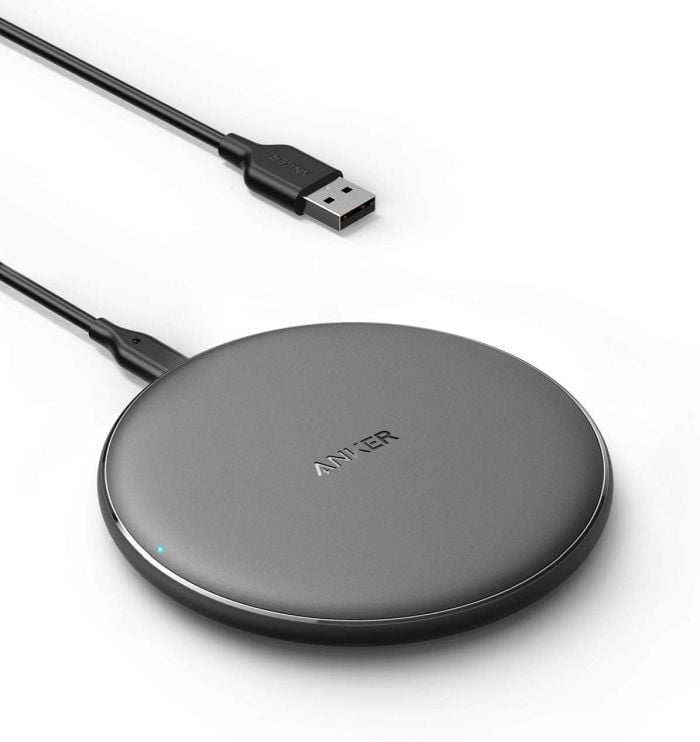 Anker is one of the oldest and most experienced brands when it comes to manufacturing chargers. The Powerwave Pad is a wireless charging pad from the company. This Qi-certified pad can charge iPhones at a maximum of 7.5W (as against up to 20W with wired charging) and supports all iPhones that can be charged wirelessly.

Moreover, you can also use the wireless charger to charge your Airpods Pro. Unfortunately, the pad is powered via a micro-USB cable instead of a USB-C cable, but that should not be a dealbreaker as such for most people. Despite having a fairly thick case on my iPhone 13 mini, it quickly charged me with up to 7.5 watts in either landscape or portrait orientation.

The Anker Powerwave Pad is officially sold in three color options: Black. White, and Navy Blue. Please note that the AC adapter is not included, and you may need to purchase it separately if you do not already have one. 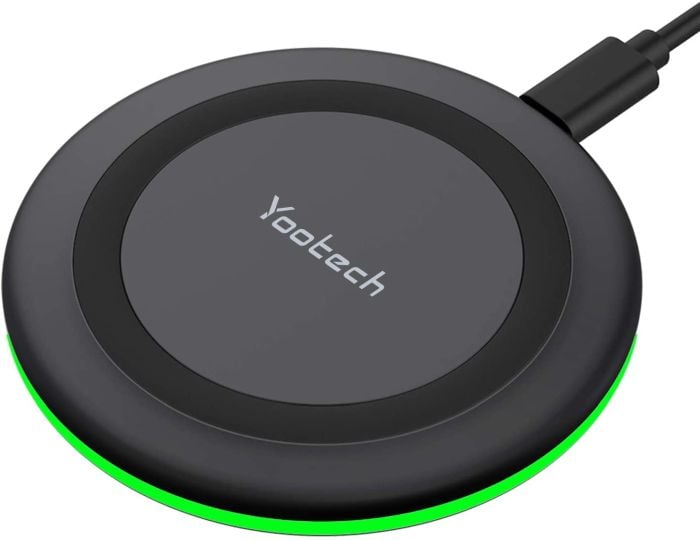 Are you looking for a cool and fancy wireless charger? If so, you should check out this iPhone charging pad from Yootech.

Unlike the Anker Powerwave Pad with a micro-USB port, this one has a USB Type-C port. The charger can charge iPhones at 7.5W and Android devices at 10W. Also, Yootech claims that smart protection technology provides better temperature control, surge protection, and short-circuit protection for your smartphone. 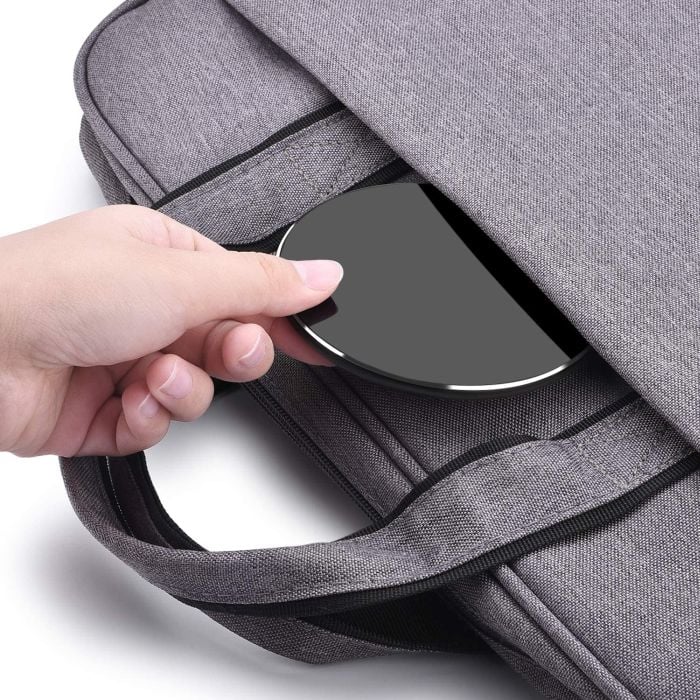 The next wireless charging pad on the list is the Tozo W3 mini and is an exciting offering. The charger seems to be quite minimalistic and straightforward, which will appeal to many users.

Moreover, it features LED indicator lights that help you understand various aspects of the charger. For example, green light means that the charger is ready to use, and blue means that a device is currently charging. Like other chargers on the list, this one can charge iPhones up to 7.5W and Android devices up to 10W.

The wireless charger is officially available in six different colors, and users can save an additional $4 with the coupon available on amazon. 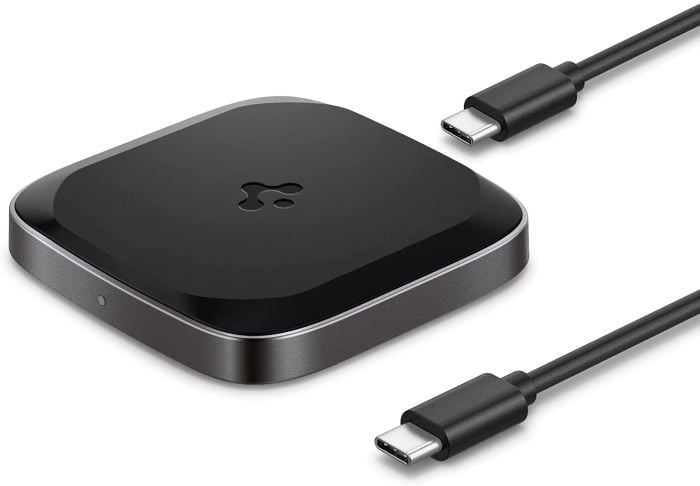 Spigen is one of the most popular brands when it comes to making accessories for our smartphones. The brand is known for the quality of its products and the variety of products it offers to its customers.

For this reason, an article about wireless chargers would be incomplete if we did not mention Spigen. The world of Spigen starts with the cable that comes with it. It is Type-C on both ends, while most manufacturers have a Type-A on one end of the cable.

That means you can easily plug the Type-C end into your Apple adapter, which Apple does not include (nor does Spigen with the charger).

The brand advertises the charger as a fast 15W wireless charger, but that only applies to Android devices, as iPhones only charge up to 7.5W. Also, at $25, you definitely pay a bit more than its counterparts. 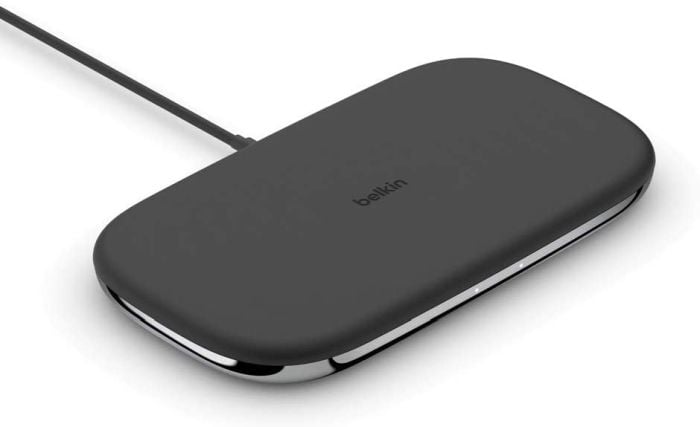 Imagine putting your iPhone on a wireless charger at night at 1% and waking up to a completely empty iPhone in the morning. How is that possible? This happens to many users because the device was not properly aligned with the coil, and charging never started.

The Belkin True freedom Pro aims to solve this wireless charging problem once and for all. The brand claims that the wireless charger consists of multiple coils that allow for full surface charging. Technically, this means that you can place your iPhone anywhere on the pad, no matter how it is oriented, and it will start charging.

However, you can’t place more than two devices on the pad at the same time. If you happen to place a third device (like the Apple Watch or an AirPods Pro) on the pad it will not charge in order to prevent the smartphone and pad from overheating.

Are you looking for a wireless charger for your work desk? Of course, but do you find it time-consuming and annoying to take the device off the wireless pad every time you just want to take a look at notifications? If so, a wireless charging stand is a right choice for you.

1. Muleug 3 in 1 wireless charger for iPhone 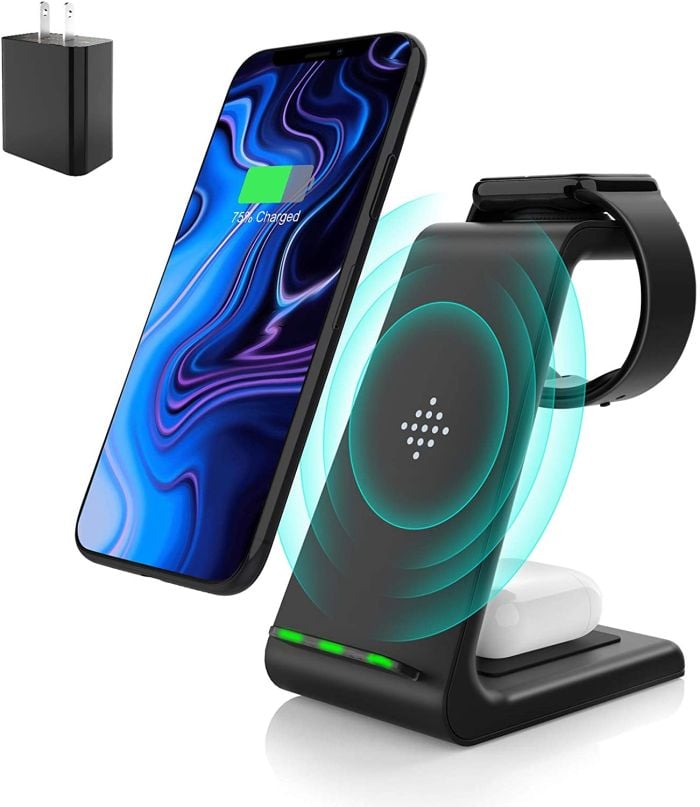 If you are looking for a charger that can charge your iPhone, Airpods, and Apple Watch all simultaneously, look no further because the Mueleug 3 in 1 can do just that, and in a compact way too.

Users can place their iPhones at the very front of the stand, Airpods right behind the stand, and the Apple Watch right above the Airpods. The charger charges iPhones at 7.5W and other accessories at 5W. It also supports cases with a thickness of less than 2 mm.

But you know what the best part is? A wall adapter is included, so you do not have to buy it separately. 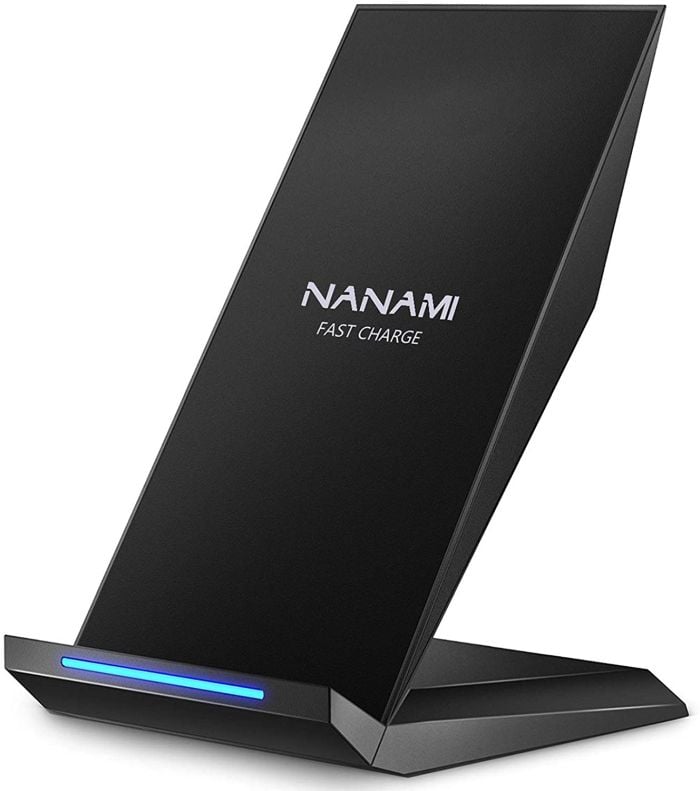 Like all other non-magnetic wireless chargers, this wireless charger for iPhones is limited to a maximum of 7.5W and has built-in overvoltage and overheating protection. In addition, the charger can wirelessly charge iPhones with a case thickness of 3 mm – that’s already good.

It also features a dual coil setup, one placed on the bottom with another on the top of it means you can charge the device in landscape mode as well, even though it is a stand wireless charger.

Like we mentioned earlier, Apple introduced Magsafe with iPhone 12 which brings magnetic charging to iPhones. Considering it’s Apple, there is a big network of Apple-certified manufacturers who are bringing the Magnetic wireless chargers to the iPhone. 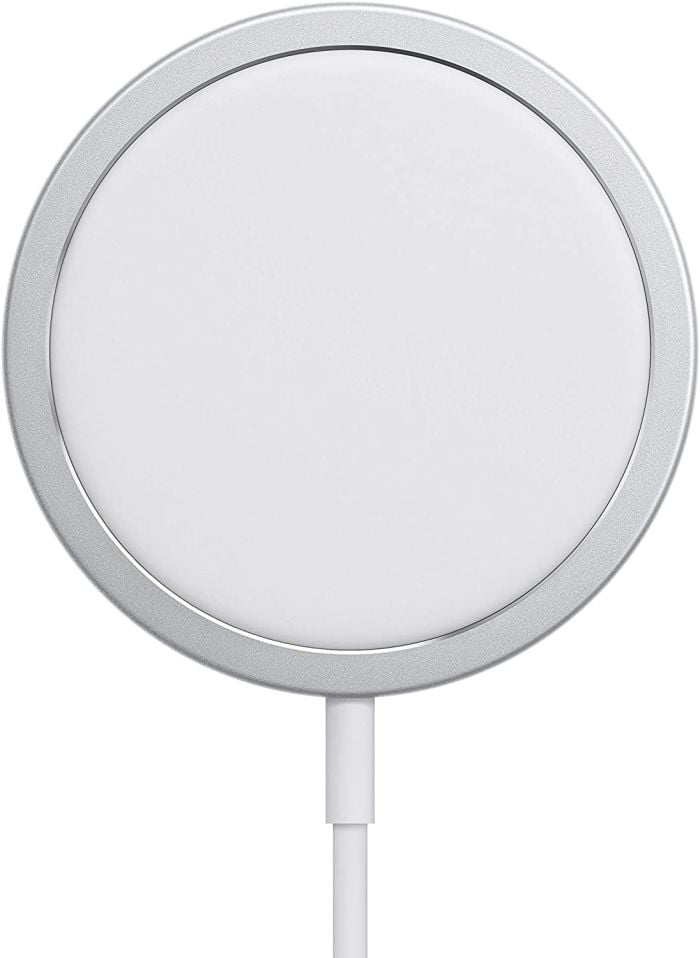 The biggest trick here is the support for fast wireless charging at 15W compared to a maximum of 7.5W for non-MagSafe compatible wireless chargers. Still, some argue that it’s still not completely wireless since a cable runs behind the iPhone, but that’s a matter of personal preference.

Overall, the Apple MagSafe charger seems to be pretty capable and is worth trying once. 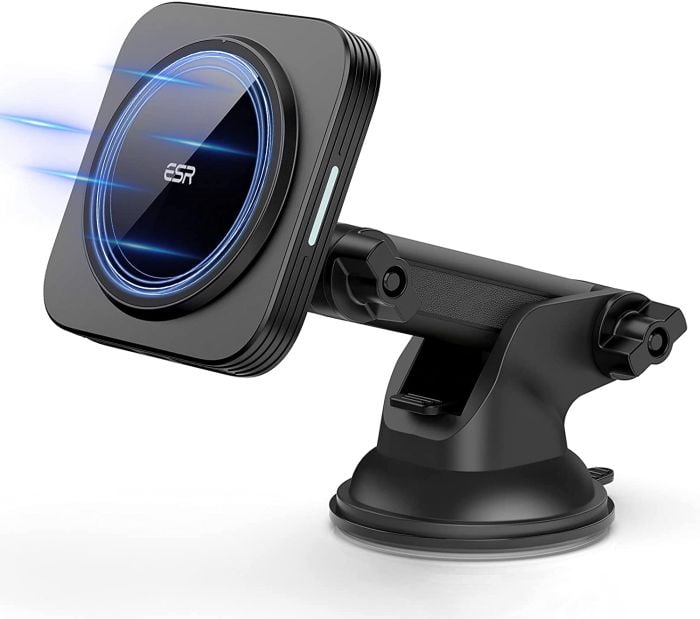 Magsafe and magnets in new iPhones have ushered in a new era of wireless accessories. Of course, car mounts have been popular for quite some time, but what if I told you that with the ESR HaloLock, you could wirelessly dock your iPhone to the mount and wirelessly charge it while driving? Sounds awesome, right?

However, it would help if you used a MagSafe-compatible case to attach the iPhone to the car mount magnetically. Also, only the iPhone 12 and 13 series are supported, and the power is limited to a maximum of 7.5W. 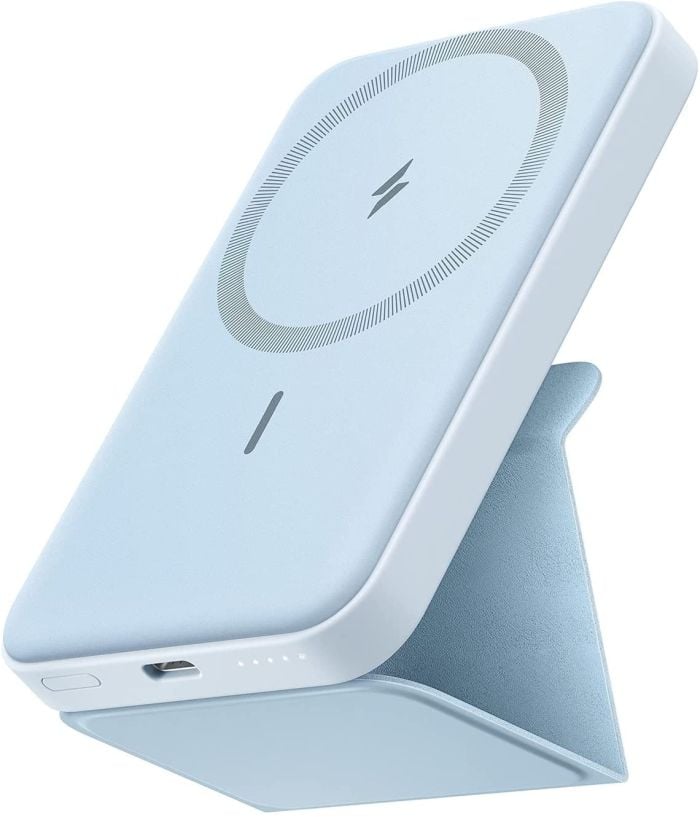 As mentioned earlier, Anker makes a whole line of iPhone accessories, and Anker 622 is a wireless MagSafe stand from the company.

Place the stand on your desk and plug the USB Type-C to Type-C cable into an AC outlet, and you are good to go, as it’s a MagSafe-compatible wireless charger; all you have to do is place your iPhone, and it aligns ideally using the magnets.

But wait, it’s not just a regular MagSafe charger; it’s also a power bank. Yes, you read that right! The Anker 622 is equipped with a 5000mAH battery, which can be very useful when you need it.

The Ultimate Wireless Charger for iPhone

Belkin 3-in-1 Wireless Charger for iPhone 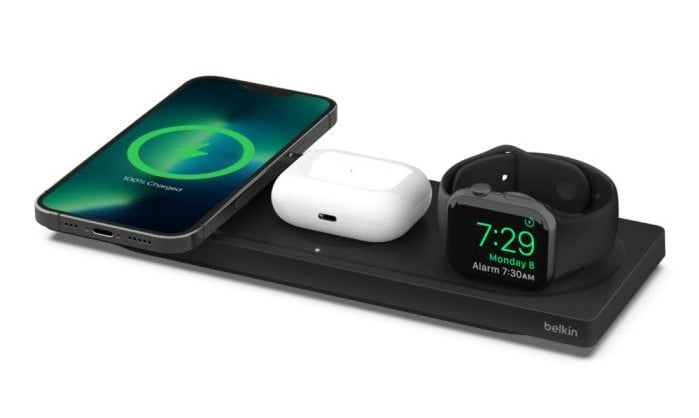 One of the reasons Apple’s wireless charging pad attracted so much attention was its ability to seamlessly charge the Apple Watch, Airpods Pro, and iPhone on a single mat. However, we all saw that it was not well received due to overheating issues and was eventually canceled.

But thanks to third-party accessory makers like Belkin, we can still get that seamless experience. The Belkin 3-in-1 seems to be an excellent offering from the company. It’s also probably the only wireless charger that can quickly charge the new Apple Watch Series 7.

Thanks to MagSafe support, it can charge MagSafe-compatible phones like the iPhone 12 and 13 at 15W, compared to 7.5W for standard wireless chargers. Also impressive are the two-year warranty and a dedicated LED indicator for the Airpods charging indicator. It’s an ideal Magsafe accessory for your bedside table.

11 Best Wireless Chargers for iPhones to Buy in 2021