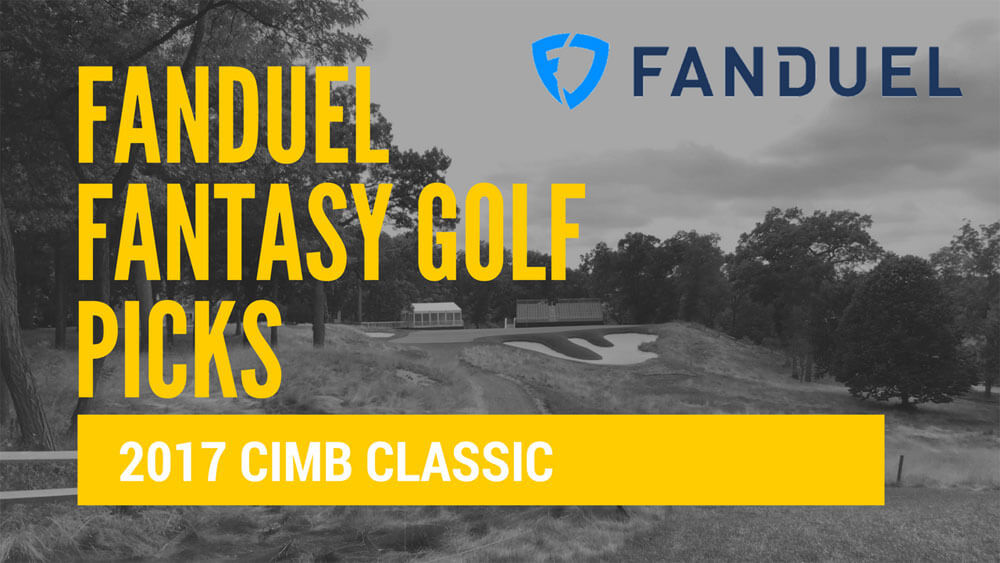 The PGA Tour regular season is back once again for the 2017-18 year following up the Safeway Open with the CIMB Classic this week in Kuala Lumpur, Malaysia. The event which partners with the Asian Tour is in its eighth year of existence and has seen a player from the United States come away victorious in each installment.

The West Course at Kuala Lumpur Golf and Country Club stretches over 7,005 yards of par-72 golf and is one of the more well known courses in Asia as both PGA and European Tour events are played on the grounds.

The biggest story heading into the week is the season debut of PGA TOUR Player of the Year, Justin Thomas, looking to start out the new campaign like he did in 2016-17; with a win in Malaysia. It would be his third in a row at Kuala Lumpur as he is just a few weeks removed from being crowned the 2017 FedExCup Champion and taking part in dismantling the world at the President’s Cup.

Justin Thomas of the United States kisses the CIMB Classic Trophy after he won it by 23 under 265 during day four of the 2016 CIMB Classic at TPC Kuala Lumpur on October 23, 2016 in Kuala Lumpur,… Get premium, high Resolution News Photos at Getty Images

His toughest competition will come from a pair of top-15 players out of the Official World Golf Rankings; No. 3 Hideki Matsuyama and No. 14 Paul Casey. Additionally, Xander Schauffele will make his first start since taking home the victory at the TOUR Championship and coming in a close third in the FedExCup standings. Schauffele made the massive jump from 299th to 32nd over his first full campaign on TOUR and will likely be a player to keep an eye on moving forward.

Besides the players already mentioned, there are another six golfers from last year’s top-30 who attended the TOUR Championship making an appearance this week. Brendan Steele should be coming in hot as he follows up his third career win last week at the Safeway Open.

As mentioned previously, despite this event being played in Asia, the winner’s have all called the United States home. Before Thomas became the dominant victor over the past two years, it was Ryan Moore who managed to win in back-to-back seasons (2014, 2015) as the previous three years were not actually a PGA TOUR sanctioned event.

There is quite a good chance that there will be a ton of scoring and some massive scores on daily sites as Justin Thomas posted winning marks of 23-under and 26-under over the last two years. In the last outing, Thomas did not dominate from start-to-finish, though, as it was two-time President’s Cup participant, Anirban Lahiri, holding a four stroke Sunday lead before collapsing and watching Thomas’ final day 64 overtake him.

A couple of big names have come in as the runner-up to Thomas with Adam Scott sitting a mere single shot back a few years ago while Matsuyama trailed by three strokes in second last season.

With a new year beginning it is time to get back into the daily fantasy side of golf and the addition of plenty of new names to keep an eye on. The field is much less than a typical PGA TOUR with just 78 players teeing it up and a handful of them being virtually unknown by the public as members of the Asian Tour.

With that said, there will likely be plenty of high-owned options with the more well known golfers and your winning lineup could come down to just a few variants from the field. Below are players at all different price levels who should be successful this week in Malaysia.

Justin Thomas – $10,500 – It is hard to suggest fading Thomas in either cash or tournaments this week. He has shot 49 shots better than par over his two consecutive victories here and is coming off of a 2016-17 season in which he won five times, including his first major at the PGA Championship, and came away with the FedExCup win. His win here last season was backed by three rounds of 66 or better as he nailed 77.8% of greens in regulation.

Overall on the year, he ranked fifth in total strokes gained (1.618) behind a big time driver (309.7 yards per, 8th on TOUR) and the best putting average (1.694) on TOUR. Thomas had a birdie or better on 25.88% of his holes played (best on TOUR) and we imagine he will be played by nearly the entire field this week on FanDuel.

Paul Casey – $9,500 – Casey sits just below some of his elite-level peers on TOUR as he owns just a single professional win over his 220 career starts. He seems to always be near the top of the leaderboard, though, and that was evident as last season came to a close with a 15th or better in eight of his last 10 starts; five of which ended as a top-five.

The key to his game is getting on the greens quickly and he was third-best on TOUR with greens in regulation (70.06%) while converting those opportunities into a scoring average of 69.469 (5th on TOUR).

Casey has played in this event each of the last three years, with a mediocre average finish of just better than 27th, but he finished off last year with some tremendous golf and we expect that to continue.

Paul Casey of England reacts on the first green during the final round of the TOUR Championship at East Lake Golf Club on September 24, 2017 in Atlanta, Georgia. Get premium, high resolution news photos at Getty Images

Gary Woodland – $7,900 – If Ryan Moore didn’t play in this event during the 2014 and 2015 seasons, Woodland quite possibly could have added a pair of victories to his resume. In both of those starts, he came in as the runner-up and tallied a combined score of 28-under behind 7-of-8 rounds of 70 or better.

Despite his poor showings here the last two years, we believe he will come out with a purpose after a strong season in which he made it to the TOUR Championship for the second time in his eighth full season. Woodland accomplished this with a coveted ability to hit the ball far (307.6 yards per drive, 13th on TOUR) and get on the dance floor (69.48% GIR, 11th on TOUR).

There is definitely some more risk with Woodland than the previous two names, but he has had great success at Kuala Lumpur in the past and should have plenty of scoring opportunities throughout the week.

Pat Perez – $7,600 – Perez came out of nowhere in the 2016-17 season and was near the top of the FedExCup standings as things were winding down in the playoffs. The 41-year-old out of Arizona State followed up a rough patch in the middle of the summer with a blistering finish, placing in sixth and 12th during the second and third rounds of the playoffs before finishing the year ranked a career-best 15th in the final standings.

Perez grabbed his second career victory when he went 21-under at the OHL Classic and carded a runner-up in the Wells Fargo Championship and third-place in the Tournament of Champions. At his age, he is not going to blow you away with his pure stuff, but he cleans up well around the greens (0.450 strokes gained, 4th on TOUR) behind 63.14% scrambling (18th on TOUR).

The window for this type of production may be closing for Perez, but as long as his confidence is up, we expect him to improve on his career-best 33rd in Malaysia.

Chez Reavie – $7,200 – Reavie will be teeing it up here for just the second time in his career as he comes off of a finish of 39th in the FedExCup standings; his best mark since ranking 35th in 2008. He made 21-of-28 cuts (75%) and finished the year with eight consecutive made cuts before the playoffs.

Reavie is one of the more accurate golfers off the tee, hitting the fairway 71.4% of the time (4th on TOUR) and continued that with his first start at the Safeway Open where he was in the fairway 69.64% of the time (best in field). He finished 13th in that tournament with four rounds of par or better and should be considered a strong competitor here with a condensed field.

Lucas Glover – $6,200 – At 37-years-old, Glover has shown that he is back to being competitive on the PGA TOUR circuit and after five straight years outside of the top-90 of the FedExCup standings finished in 43rd this past year. He looks fantastic behind 21-of-26 cuts made (81%) with four top-10s and nearly earned his fourth career victory when he placed third at the Shriners Hospitals for Children Open.

Lucas Glover tees off on the eighth hole during the First Round of the BMW Championship on September 14 at Conway Farms Golf Club, in Lake Forest, IL. Get premium, high resolution news photos at Getty Images

Hudson Swafford – $5,500 – It is surprising to see Swafford come into this small field event with such a low price tag after he nailed down his first career victory and finished a career-best 38th in the FedExCup standings last season. He had more top-10s (4) than he had combined (3) in his first three full seasons on the PGA TOUR while nearly earning himself a spot in the TOUR Championship.

Watch out for Swafford to build off his previous pair of visits to Malaysia and improve on his average finish of 27th-place when all is said-and-done this Sunday.

Luke List – $5,300 – If Luke List can take advantage of his huge drives (311.5 yards per, 4th on TOUR) this week, he has a great chance to be near the top of the leaderboard. He used his distance off the tee to get on the dance floor in regulation 69.10% of the time (14th on TOUR), but needs to improve his game with the putter before he starts becomes a threat.

List is a great price for the huge ceiling he can reach, making him a fantastic tournament play.

Sign up for a Golficity Premium Membership and for just $7.95 per month you'll get all-access to our weekly fantasy golf picks, odds, and predictions for every PGA TOUR and European Tour event.