The 15-inch-tall clockwork Padre, the figure of the well-known miraculous Monk San Diego de Alcalá, was made of wood and iron and manufactured by Juanelo Turriano, the mechanician of Emperor Charles V, in the 1560s. The monk can walk around, beating his chest, lifting his cross and praying silently. After over 400 years, he remains in good working order. 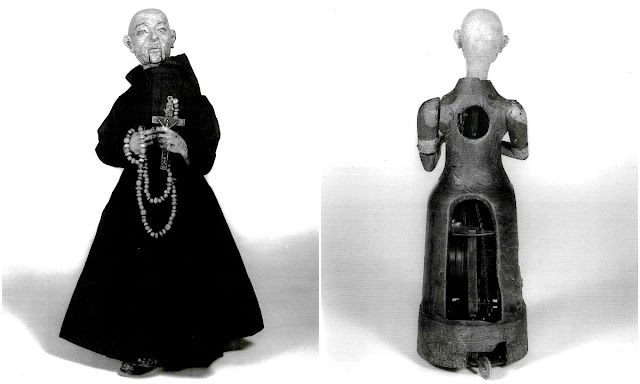 Tradition attributes his manufacture to one Juanelo Turriano, mechanician to Emperor Charles V. The story is told that the emperor’s son King Philip II, praying at the bedside of a dying son of his own, promised a miracle for a miracle, if his child be spared. And when the child did indeed recover, Philip kept his bargain by having Turriano construct a miniature penitent homunculus.

In the history of European clock technology, the monk is an early and very rare example of a self-acting automaton, one whose mechanism is wholly contained and hidden within its body.


Seemingly a cheat’s side-step out of the promise, the monk has been described as both a miracle and the work of the devil. Devil worship aside, it is thought more likely that the monk was made in the image of a Spanish Franciscan brother named Didacus of Alcala (the one San Diego is named after). The theory goes that this Catholic saint saved the boy and in return would be venerated eternally by his mechanical counterpart. This fits with the context of the monk’s creation. Rituals and symbols of piety were all the rage again as strong Catholicism spread across Europe in the Counter-Reformation.

King Philip was a crucial figure in the wars between Protestant Reformers and Catholics. Marrying his cousin, Mary Tudor, he was influential in reinstating Catholicism throughout England. Violent efforts to absolve the kingdom of its divergence from Rome earned Philip’s wife the title of ‘Bloody Mary’. Philip left England when Mary died and Elizabeth I took the thrown, only to return in the name of Catholicism with his Spanish Armada in tow. The dominating Armada was famously caught in a storm and defeated by the English Fleet.

King Philip was one of the most powerful men of his time. His rule spread across Spain, Portugal, parts of Italy and the Netherlands. The reach of Spanish influence across the globe under Philip is referred to as the kingdom’s Golden Age. Philip had the power to command vast armies, including to their defeat. Yet, the mechanical monk reveals his scramble to find control where he had none.