On June 25, 1951, CBS broadcast the very first commercial Color TV program. Unfortunately, nearly no one could watch it since most people had only black-and-white televisions. 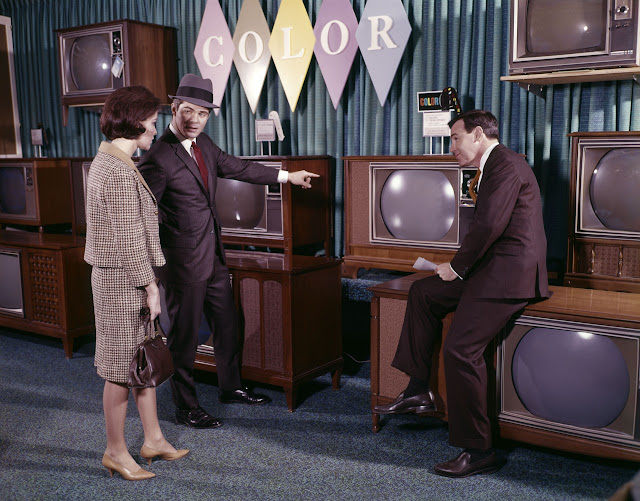 In 1950, there were two companies vying to be the first to create color TVs –– CBS and RCA. When the FCC tested the two systems, the CBS system was approved, while the RCA system failed to pass because of low picture quality.

With the approval from the FCC on October 11, 1950, CBS hoped that manufacturers would start producing their new color TVs only to find nearly all of them resisting production. The more CBS pushed for production, the more hostile the manufacturers became.

RCA, on the other hand, was working on a system that would be compatible with black-and-white sets, they just needed more time to perfect their rotating-disk technology. In an aggressive move, RCA sent out 25,000 letters to television dealers condemning any of them that might sell CBS’s “incompatible, degraded” televisions. RCA also sued CBS, slowing down CBS’s advancement in the sale of color TVs.

In the meantime, CBS started “Operation Rainbow,” where they tried to popularize color television (preferably their color televisions). They placed color televisions in department stores and other places where large groups of people might gather. They also talked about manufacturing their televisions, if they had to.

On May 28, 1951, the Supreme Court upheld the FCC’s decision. But while CBS may have won the battle, it lost the color war. During the seven-month court battle, publicity from the case made consumers aware of CBS’ system incompatibility, while RCA increased its TV market share by 50 percent and was able to refine its color system. On December 17, 1953, the FCC reversed itself and announced a new NTSC color standard — essentially, the RCA system.

Two weeks later, RCA rushed out 200 prototype 15-inch Model 5 sets to its top dealers around the country for viewing parties of the upcoming New Year’s Day Rose Bowl Parade. NBC was broadcasting the parade in living color, the first nationwide color broadcast. The Model 5, which can be seen and watched at the Early TV Museum in Hilliard, OH, would become the factory-produced CT-100 priced at $1,000 (around $9,500 today) when it went on sale the following spring. Admiral also started selling its 15-inch C1617A color set the same day for $1,175 (around $11,000 today).


TIME magazine proclaimed color TV to be “the most resounding industrial flop of 1956.” It wasn’t until 1968 that most prime time shows on the three major networks were broadcast in color, and not until 1972 that sales of color TVs surpass those of black-and-white models.