I call my dentist "the God of Dentistry." He is simply the best in his field. I have concluded this after experiencing the skills of others for my entire life, which has lasted seven decades plus. All his patients love him. If and when he retires I will simply not use my teeth anymore.

Philippine government pressed to put …
How to Develop an Educational App?
10 Super Honest Sex Tips That Men Wan…
Antiracism Resources for White Teache…
How to Make a Latte at Home

Our lawn guy is also great, much better than the last one who did a crummy job mowing and a worse job  plowing in the winter. The one we have now is a perfectionist who knows everything about landscaping. Trimming this and pruning that, even chopping down dying trees, he has improved our property 100%.

I could sing the praises of many others: my dental hygienist, my CrossFit trainer and the guy at the fish market all excel at what they do. Yet none of them is famous, doing their jobs without citations for excellence. Yet actors and actresses, directors and makeup people, who really, when you stop and think about it add little of value to society besides distracting us from problems we would otherwise be busy solving, get all gussied up countless times each year to receive glowing accolades for their work. 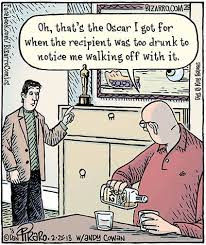 The Oscars, the Tonys, the Golden Globes, The Emmys, The People's Choice Awards, the Obies and others too numerous to list here, perpetuate the glorification of the entertainment industry. This is done shamelessly, as if every single actor and actress has found the cure for cancer. Last night a typical awards show heralded the winners of Golden Globes, cousin to the Oscars that includes TV performances. Channel surfing, I passed by it several times and caught glimpses of dolled-up presenters in black sequined attire presenting awards to similarly dressed recipients who gave speeches I didn't hear.

Earlier in the evening I did catch most of Donald Trump speaking to the choir at CPAC. He looked better than ever, rested and a bit thinner, his hair less orange and more realistic. He was funny and seemed relaxed as he trashed Joe Biden and a host of turncoat Republicans. It was fun to see an actual human being talking about politics in everyday language, something missing from the current administration. God help us all if he stays in the political arena, but I found his particular brand of egotism easier to take than the effusive back-slapping among the Hollywood elite over at the Golden Globes.

Faded auburn hair: how to make it with shatush and balayage – Tips Clear.it