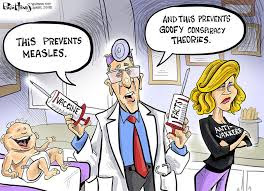 Although the day before yesterday I grudgingly bared my upper arm for a shot of Moderna's Covid vaccine, I was never fully on board. Still, knowing that if I didn't get it most people would consider me a conspiracy theorist and danger to society hindering the herd immunity that will save us all, for the good of mankind I did it. (You're welcome.)

The following day was a throwaway. My arm hurt, of course, but besides that I was unable to do much of anything but sleep and weep. My head throbbed. Yes, I did not die and yes, it passed. But then today I read in the news that Variants from abroad are showing up here in the US -- like in New York City, for example, which is pretty close to where I live as the crow flies. (If the crow drives it's six hours away.)

Representatives for Moderna Inc. assert they are working on a new vaccine to fight the incoming variants from South Africa and other "emerging strains," since the current vaccine doesn't cut it. So why would I show up for the second dose (which reportedly has worse side effects than the first) of an ineffective vaccine a month from now?