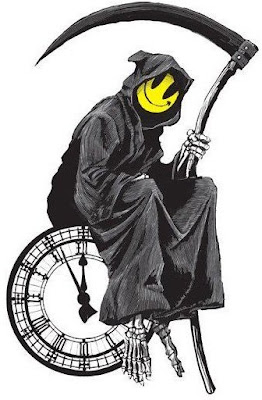 According to last Sunday's New York Times, death is now "trending" among people in their 20s and 30s. Big deal! I'm not trying to brag, but we Baby Boomers have it all over those Millennials. Sure they may talk about death, but lots of us are actually doing it, and have been for years.

Noticing the growing vampire/zombie fixation popularized in video games and on TV, two young entrepreneurs, ages 27 and 35, invented an iPhone app called WeCroak, the purpose of which is to remind users five times a day that death will eventually come calling. Currently there are more than 9,000 users who each paid 99 cents for the favor, if that's what it is, of receiving random messages like, "Don't forget, you're going to die," and "The grave has no sunny corners."

I don't know about you, but I'm aware pretty much on a daily basis that I will die. It's actually hard to forget if you're paying attention. Even if you hide in bed under the covers most of the time and just run out for groceries every so often, chances are something will remind you. (This morning it was a smashed and bloodied squirrel lying in the middle of the road, making me think, "Oh yeah, right. Me, someday.")